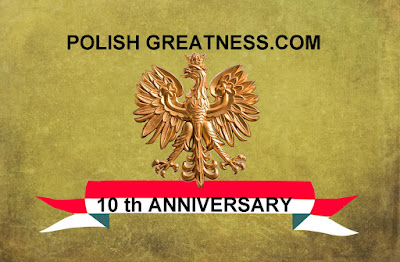 I am pleased to announce that my website Polish Greatness.com is celebrating it's 10-th Anniversary!  It was first inaugurated on September 1st, 2007. The main feature of this website is dedicated to promoting Polish history during World War Two, and lists numerous articles which I have researched and written. They focus on Poland's enormous contributions to the Allied war effort during World War Two. It is a tribute to the great courage of the men, women (and even children) fighting the Nazis and Soviets, against all odds. There is a vast amount of historical information and data, as well as archival photos.

Additional sections were later added, such as "Polish Culture" which features Polish music of all genres,as well as sample videos, biographies and discographies of famous Polish stars.  There is also a small section based on book reviews (but I apologize for not having expanded it as I initially intended.).

Another special feature was added called, "What's New" to let visitors know the latest articles and blogs posted. On September 1st, 2010 I started Polish Greatness (Blog) featuring a regular series of more detailed stories about some of the battles of World War II, many of  the contributions of the Polish armed forces, and the biographies of Polish Generals, and many other heroes!

To celebrate this 10th Anniversary, I have created the Polish Greatness Database - Books which presents a vast collection of more than 200 books dealing with many topics such as Polish WWII history, Polish Military, Polish Medieval History, Polish Memoirs and much more. Images of the book covers have been arranged in thumbnail format and linked to the corresponding pages in Amazon (there you can read summaries of the books, information about the authors, reviews, and even order your books online if you wish).

The theme that I have chosen for this 10th Anniversary Special is the Polish White Tailed Eagle (which is featured in the logo that I have assembled especially for this occasion,  as indicated above. I extracted the image of this eagle from a photograph taken of the gate entrance of the University of Warsaw.)

Other special features are, The Order of the White Eagle, (showcasing some of the famous Polish recipients of this great medal), Polish Eagles Among Us (which is a whimsical illustration of symbols of the eagle in Polish architecture, and The Glory of the Polish Eagle, (which gives some historical insight to cultural relevance of the eagle.)

The eagle has been the symbol of the Polish nation since time immemorial and has been part of the Polish identity, and always will be. It saddens me deeply to know that the Polish White Tailed Eagle was on the brink of extinction, but thankfully has been saved by dedicated conservationists.  I consider this a "wake-up call" to all of us who take the eagle (and other creatures) for granted. I hope that it will raise awareness, and motivate governments, and businesses everywhere to take decisive action to protect these magnificent raptors.

I invite you to visit Polish Greatness.com (the Website) and discover history told in ways you never imagined.

More articles will be posted (on the website) in the coming weeks. So stay tuned.


Thank you Dear Friends of Poland for your interest in Polish Greatness.com, for sharing my articles, and for your comments and encouragement! 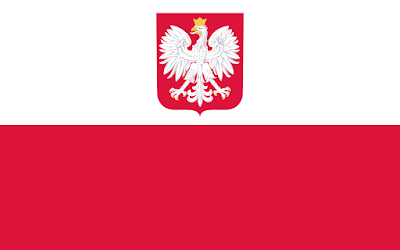