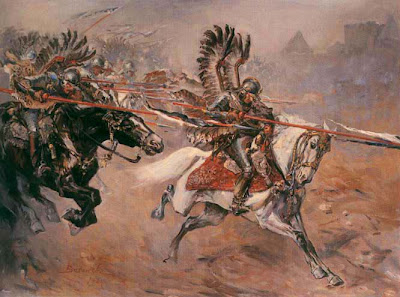 There are a lot of resources available on the web for Husaria enthusiasts. The subject has experienced an upsurge of popularity.  The following list includes Husaria Re-enactments, Books, DVD of great films on the subject of Hussars and medieval Europe, as well as a selection of popular video games for fans of medieval warfare, and one source that actually manufactures miniatures of Polish Winged Hussars (not only for kids!!) as well as a website where you can download Husaria wallpaper to your cell phone or PC.  If you have any suggestions for interesting sites about Husaria, please let me know so that I can add it to this list.

Suligowski's Regiment. An Los Angelos based Hussar Re-enactment group, portraying the famous winged hussars at the Battle of Vienna, 1683. Their goal is to educate the public about the history and culture of Poland, and organize numerous events at which they exhibit clothing and equipment of the era. They invite people to join, and unlike other re-enactment groups, you won't start out as a slave but rather as an equal in the noble brotherhood. Women enjoy equal status!  http://www.husaria.us/index.html


Orlicki's Polish Light Artillery Group:  A 17th century Polish reenactment group based around Kismeta, the group's working replica of a period artillery.  The artillery crew is supported by hussars, pancerni and dragoons. This site is an excellent resource for new recruits to get information on getting started as a 17th century reenactor. http://www.kismeta.com/diGrasse/PolishHorseArtillery.htm


Polska Reustawa - Also known as Katski's Regiment. A 17th century Polish reenactment group based on dragoons and pancerni cossacks with an emphasis on firearms and horse archery. http://groups.yahoo.com/group/Polska_Reustawa


Re-enactment of Battle of Klushino 1610 (Celebrating the 400th Anniversary) A Photo Album
http://ilovewargameing.21.forumer.com/viewtopic.php?t=2844

With Fire and Sword (The Trilogy, Book I)

In the Legions of Napoleon: The Memoirs of a Polish Officer in Spain and Russia, 1808-1813

Download Husaria Wallpaper to your cell phone or PC

This concludes the series on
Great Polish Warriors: The Winged Hussars

Thank you for visiting

Posted by Polish Greatness Blog at 1:39 AM