On April 16, 2012 the European Court of Human Rights (ECHR) announced its judgement in the Case of Janowiec And Others vs the Russian government.  Two applications had been filed, in 2007 and 2009, by fifteen Polish nationals, later joined by the Polish government. They raised grievances against the Russian government for its refusal to allow access to its files containing information about the victims of the Katyn Massacre.

In 1940 the Soviet NKVD under Stalins' orders executed more than 16,000 Polish Officers in the forests near Smolensk, Russia. Three years later the Germans discovered the mass graves and denounced the Soviets as the perpetrators.  The Soviets adamantly denied it, and enjoyed the protection of its allies Great Britain and the United States, whose tacit support ensured that the controversy would remain obscure for decades.


In April 1990 President Mikhail Gorbachev gave State secret documents to the Polish President, which contained information that proved irrefutably that the Katyn Massacre was carried out by the Soviet secret police, and not the Germans. The USSR publicly expressed "profound regret". Gorbachev stated, "It is not easy to speak of this tragedy, but it is necessary."  His gesture, and the admission of Soviet guilt, was unprecedented in the history of Russian-Polish relations.  But despite these revelations, and the subsequent release of more secret Soviet documents about Katyn, the spectre of Russian conspiracy prevailed.

In September 2004 the Russian government promised that information relating to the Katyn Massacre would be submitted to Polish officials as soon as the documents became "declassified".  Surprisingly, in March 2005, the Prosecutor-General's Office declared that the investigation was officially discontinued, that the reasons for so doing was itself a State secret, and that such documents were inaccessible to foreign nationals. The Russian authorities refused to even provide a copy of their decision to discontinue proceedings.  In the meantime out of a total of 183 volumes of files which had been accumulated by the Russian investigative team, there remained 116 volumes still classified as top secret. (NB. On April 7, 2011 the Soviets handed Poland eleven more volumes of declassified documents related to Katyn.)

In March 2005 the Polish Sejm (Parliament) unanimously passed an Act requesting full disclosure from the Russian government regarding documents about the Katyn Massacre, and their acknowledgment of the fact that it was genocide.  Poland emphasized that the refusal by Russia to provide access to the records of the investigation, made it "difficult to determine the whole truth about the murder and its perpetrators."   However, the Chief Military Prosecutor for the Russian Federation, Alexander Savenkov attested that the Katyn Massacre was not an act of genocide, and that there was " absolutely no basis to talk about this in judicial terms" since the perpetrators of the crime had already been found guilty and were dead.

The court proceedings were fraught with an endless array of Russian-style tactics of evasion and lies, rebuttals, and stonewalling. For example in 2003, Mr. Szewczyk, the lawyer representing  Mr. Janowiec, applied to the Prosecutor General of the Russian Federation, with a request for access to documents related to Mr. Janowiec, and two other persons. The Russian office denied access to such information on the grounds that "documents could only be given to the officially recognized victims or their representatives." Despite repeated attempts, the applicants' lawyers were unable to obtain such recognition for their clients.

The Russian propensity to wield contradictions and ambiguity was particularly frustrating to the Court and painful for the Applicants to bear.  Note that in April 2007 the Military Court of the Moscow Command concluded that there were no legal grounds to assume that Mr. Janowiec and others were victims of the massacre.  According to Russian authorities their names were listed among the prisoners at Starobelsk camp, but their remains had not been identified during the investigation.  And since their bodies had not been identified, there was "no proof that the applicants' relatives had lost their lives as a result of the crime of abuse of power (Article 193.17 of the 1926 Soviet Criminal Code.) In essense, the Russian defense claimed that the whereabouts of the victims were unknown, as though they had "vanished." However, on June 23, 2003, the Prosecutor General's Office declared that an investigation completed in 1991, in which 200 bodies were exhumed from the Smolensk area, resulted in the identification of "some of them including Mr. Nawratil and Mr. Janowiec".  In 1943, of a total of 4,243 bodies exhumed near Katyn, 2,730 were identified. Among them were the bodies of relatives of the claimants in the proceedings.

The ECHR also charged the Russian Government with a violation under Article 3 of the Convention. The applicants had suffered an ordeal that lasted for decades in their pursuit for information about their relatives.  Throughout the process they endured "official denial and indifference in the face of their acute anxiety to know the circumstances of the death of their close family members and their burial sites."  The Russian authorities were unresponsive, and provided information that was either contradictory or ambiguous, and that such information was acknowledged at the highest political level.  No effort was ever made on their part to clarify the circumstances surrounding the death of their relatives, nor locate their burial sites.

The ECHR asserted that a denial of crimes against humanity is counter to the fundamental values of the Convention, and of democracy.  The Russian response runs contrary to these fundamental values, and  "demonstrated a callous disregard for the applicants' concern and deliberate obfuscation of the circumstances of the Katyn Massacre."

Russian unwillingness to cooperate with the ECHR and their refusal to make full disclosure about Katyn,  have not contributed one iota to improving Russian-Polish relations.  It has accomplished the reverse. It has elicited a heightened degree of suspicion, distrust, and hostility towards the Russian government, feelings which are unlikely to recede unless the Russian government, and in particular, President Putin, shore up the courage to speak the Truth, the Whole Truth, and nothing but the Truth.


The complete transcript of the Judgement of the ECHR, dated April 16, 2012,  is available on line.  Please click here.

Posted by Polish Greatness Blog at 12:05 AM No comments: 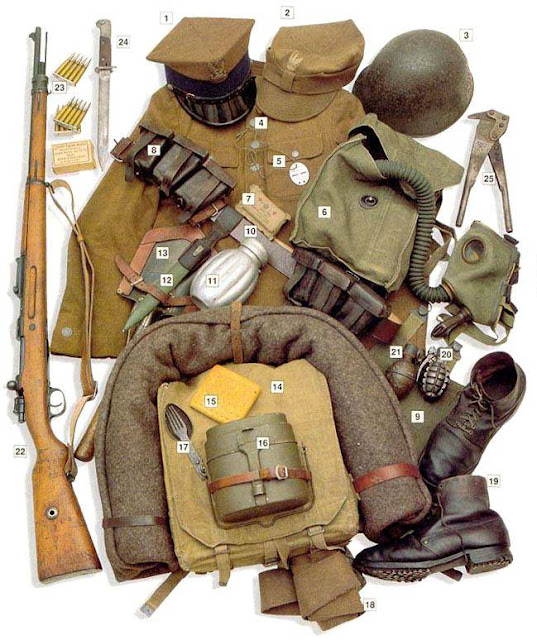 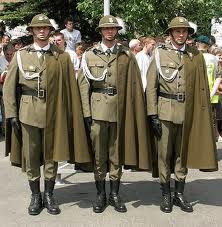 There is a small, small edelweiss
on a steep, steep rocky heights!


The traditional symbols of the Podhale Rifles regiment are the edelweiss and the Mountain Cross, the latter which has been part of the folk culture of the Polish mountain regions. It has no relation whatsoever to the Nazi swastikas of the NSDAP.  In fact the Mountain Cross pre-dates the rise of the Nazi party. 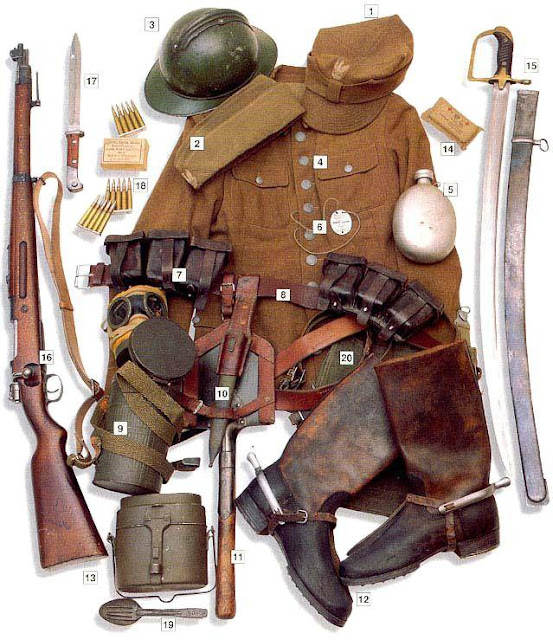 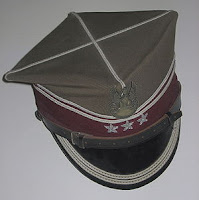 (Photo: Rogatywka with Polish coat of arms and pulkownik is the rank insignia of a Colonel.)


"Rogatywka" is the Polish name for an asymmetrical, peaked,four-pointed military cap. "Rog" is a derivative of the word and means "horn". No other army in the world has such a cap. There are two types of caps, the hardened version, indicated by "Mk.1935, is olive green with black peak and is worn in full gala uniforms; its rim color marks the unit type. The soft version was worn before WWII and during the period of the PRL, but was withdrawn after 1990. Unlike most military forces, Polish soldiers do not decorate their caps with military insignia, but rather with the Polish White Eagle, which is the Polish Coat of Arms. Rim colors have specific meanings as follows;

CZAPKA is the Polish word for a cap.  It was the headgear of 19th century Polish cavalry and was quite high and consisted of a four-pointed cap emblazoned with the regimental insignia on the front.  Sometimes feathers or rosettes were added. 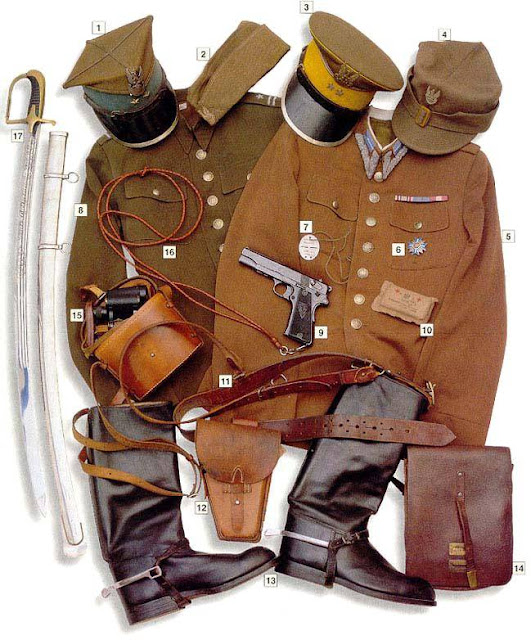 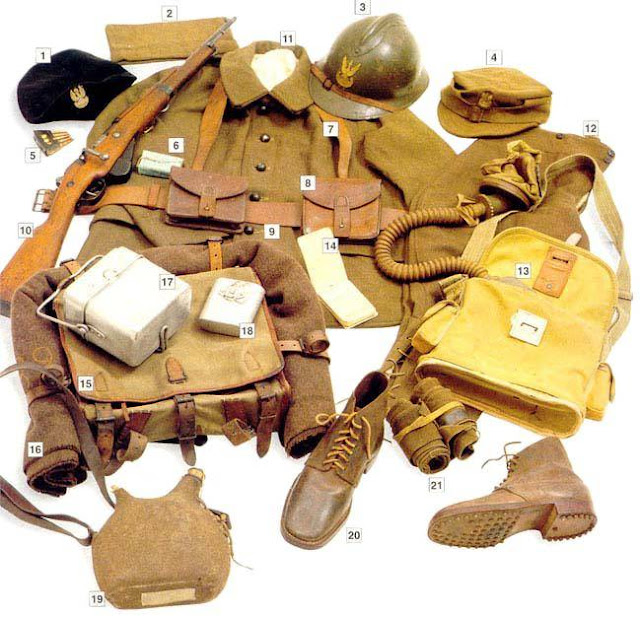 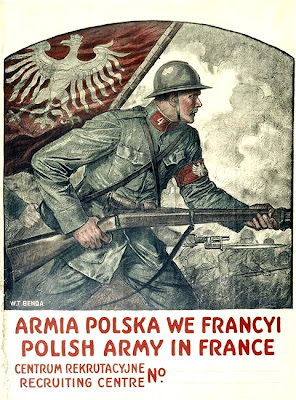 Hieronim Dekutowski (noms de guerre "Zapora", "Odra", "Rezu", "Stary", "Henryk Zagon") was an Officer of the Polish Armed forces fighting in the Western front, and was a legendary Cichociemni and guerilla commander of the Armia Krajowa (Home Army). After the so-called "Soviet liberation" of Poland, Dekutowski went into hiding from the Soviet NKVD and Urząd Bezpieczeństwa (UB). On February 5, 1945, Abram Tauber, the Jewish commander of the UB in Chodel invited four members of the Polish underground to his headquarters.  Tauber had previously been rescued from the Nazis by Polish AK units, and often sought refuge at the "Zapora" compound.   But when the Polish men arrived at the station Tauber ordered them to be tied up and single-handedly shot them one after another.   In retaliation, Dekutowski attacked and destroyed the UB station in Chodel. The incident sparked an anti-Soviet uprising in the region. 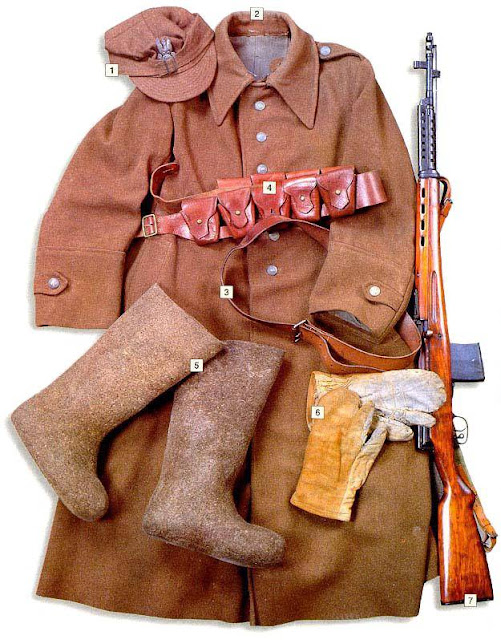 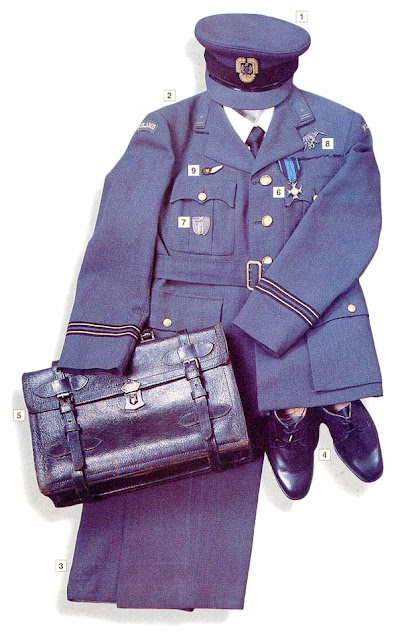 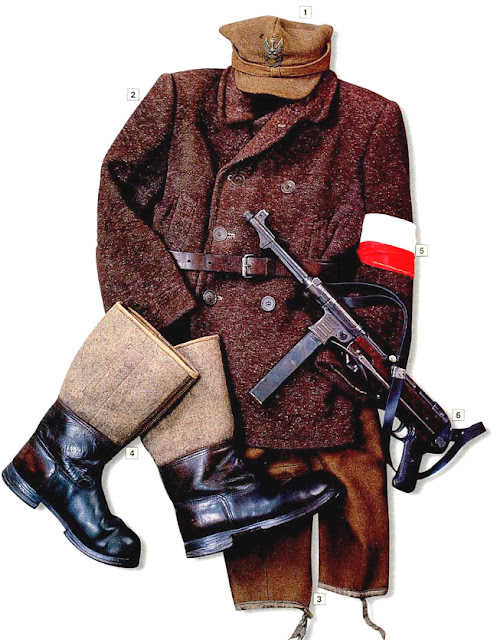 Bataliony Chlopskie was a resistance movement and partisan organisation created in the mid 1940s by
the Stronnictwo Ludowe, (Polish People's Party), an agrarian political party.  By 1944 it was partially integrated with the Armia Krajowa (Home Army). At its peak it had 175,000 members. Their first major action was during the Zamosc Uprising in 1942 when the Germans expelled the Poles, expropriated their farmland and and gave it to German settlers. After several major battles, the Germans stopped the expulsions. 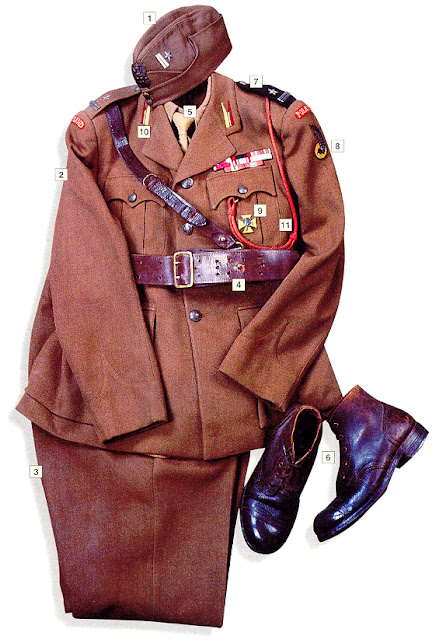 Photo:   Haddington 29.04.1943 The colour of the 10th Dragoons during the celebrations of the regimental day of the 10th Mounted Rifles. 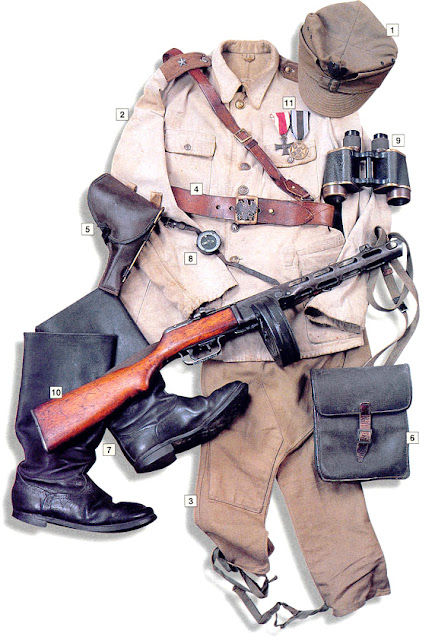 Polish soldiers of the 24th Self-Propelled Artillery Regiment.
(Vehicle may be an SU-85) Polish eagle moderated. 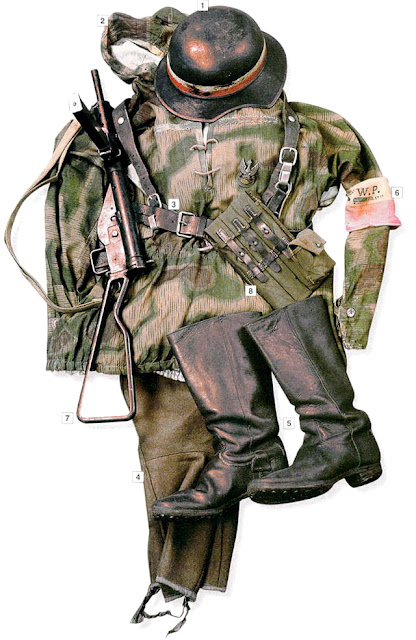 Soldier of the Warsaw Uprising 1944 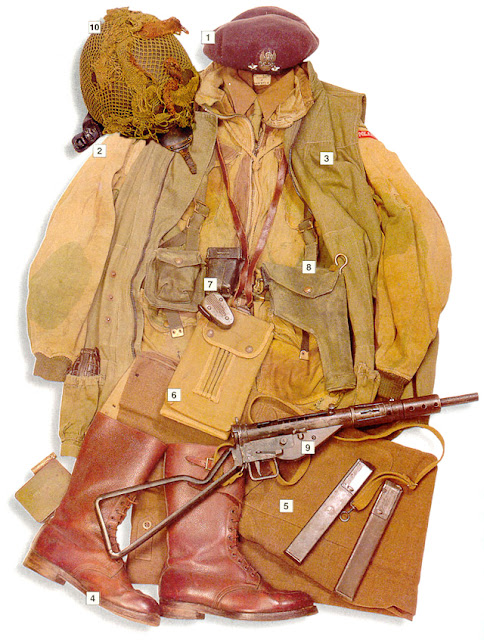 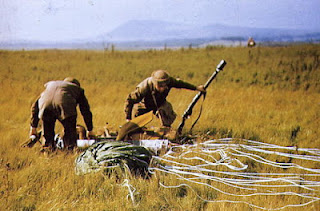 Polish paratroopers during field exercises Scotland, Kingcraig circa 1943. These men were elite special operations troops who were called "Cichociemni" the dark and silent ones. Of 2,413 candidates, only 605 men were able to complete the training successfully, but 579 qualified for air missions. 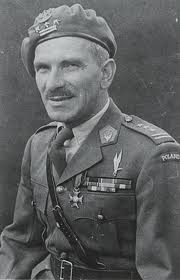 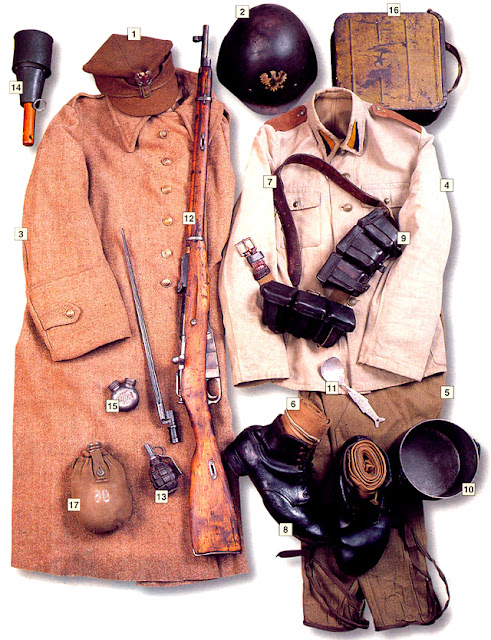 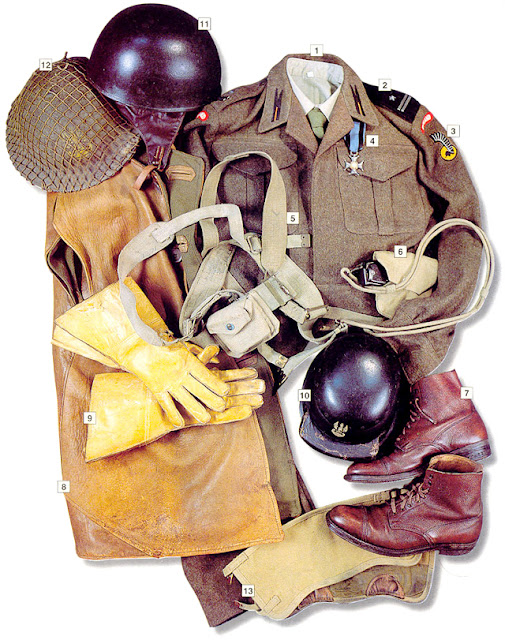 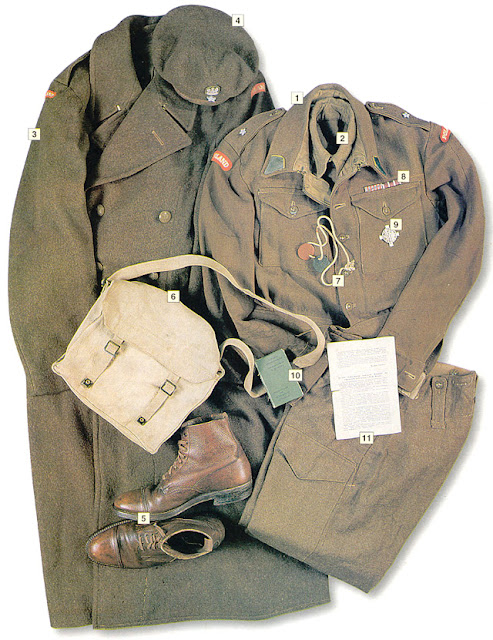 
Wojtek was more than a mascot. He grew up to become an official soldier of the 2nd Polish Corp - the 22nd Artillery Supply Company.  He carried heavy loads of ammo for his unit. 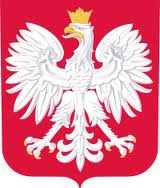