THE TRUTH ABOUT KATYN MASSACRE

In September 1939, Poland was invaded by Nazi Germany and the Soviet Union in accordance with the Molotov-Ribbentrop Pact. As the Red Army advanced into Eastern Poland, they captured, and deported 320,000 Polish citizens to camps in the Soviet Union and interned from 250,000 to 454,000 Polish soldiers. About 125,000 were transferred to the NKVD, while 43,000 Polish soldiers were transferred to the Germans. Among the remainder who were released were 170,000 non-Polish servicemen in the Polish armed forces. From 10,000 to 12,000 Poles were sent to the Kolyma mines in Siberia in the period 1940-1941. Only 583 men survived.

By November 1939, the Russians had transferred 15,000 Polish Officers into the hands of the NKVD. Among the POWs were civilians, professors, doctors, lawyers, journalists, artists, judges, an Olympic athlete, priests, and the Chief Rabbi of the Polish Army.

The NKVD, which was under the command of Lavrentiy Beria, the People's Commissar for Internal Affairs and First Rank Commissar of State Security, received orders to organise a network of transit camps and arrange rail transport of the Polish officers to prisoner-of-war camps in the western USSR. The largest camps were located at Kozelsk, Ostashkov, and Starobelsk.

In response to the memo sent from Beria to Stalin, an order was decreed on March 5, 1940, to execute 25,700 Polish "nationalists and counterrevolutionaries". It was signed by Stalin, Vyacheslav Molotov, Kliment Voroshilov and Anastas Mikoyan. By executing the Polish elite and it's military and political leaders, it was Stalin's objective to render the Polish state completely powerless.  (In Western Poland, the Germans were implementing a similar policy - of rounding up and murdering the Polish intelligentsia.)

In April 1940 the Polish prisoners detained at the Soviet camps were told that they would be repatriated to Poland. The first group boarded a train, but oddly it was not travelling east, but rather westward. It came to a stop outside Katyn Forest, situated near Smolensk. From there the Polish officers were herded into black vans which drove them to a clearing in the woods. When they stepped out, the Russians took them to a large pit inside the forest, and forced them to kneel at its edge. Their hands were tied behind their backs, and a choke knot tied around their neck and hands so that if they struggled they would have strangled themselves.

They were surrounded by dozens of armed NKVD agents who systematically shot each Polish prisoner in the back of the head. Their bodies were thrown into mass graves. This convoy of death went on for several weeks. By mid-May almost 4,500 Polish officers had been murdered and buried in eight mass graves - the largest grave contained 12 layers of corpses. 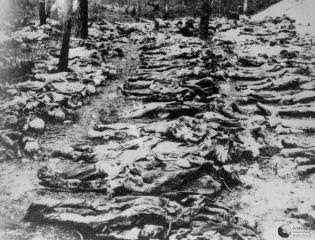 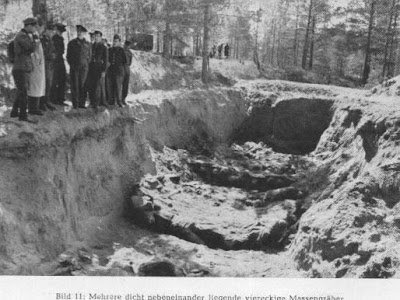 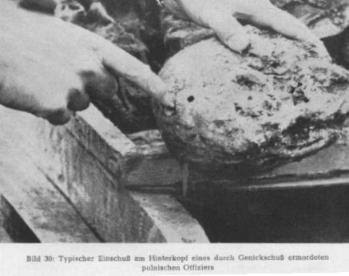 Among the dead were more than 200 pilots including friends and classmates of the Kosciuszko Squadron. One of its' victims was the brother-in-law of Witold Lokociewski. The sole survivor of Katyn was Professor Stanislaw Swianiewicz. He was on board the train headed to Katyn Forest, and was standing in the line ready to board the van, but for an unknown reason an NKVD colonel had pulled him out of the line.

The Nazis invaded Russia in July 1942, but it wasn't until the next spring that they discovered the mass graves in Katyn. The bodies were exhumed and examined by a team of forensic experts and staff that the Germans called in from Belgium, Bulgaria, Denmark, Finland, France, Italy, Croatia, the Netherlands, Romania, Sweden, Slovakia, and Hungary. With the exception of the Bulgarian and Czech contingent, all the experts agreed and reaffirmed that the Soviets were guilty of having committed the atrocity. Stalin denied all responsibility and countered by accusing the Nazis of the massacre. But when Polish Prime Minister Sikorski called for an investigation by the International Red Cross, the Russian government accused the Polish government-in-exile of collaborating with the Nazis, and abruptly severed all diplomatic ties with Poland.

Despite unrelenting pressure from the West, Sikorski was unwilling to make compromises on the issue. Two months later Sikorski died in a mysterious plane crash.


"In the broad deep pit their comrades lay, packed closely around the edge, head to feet, like sardines in a tin..up and down on the bodies the executioners tramped, hauling [the corpses] about and treading in the blood like butchers in a stockyard." 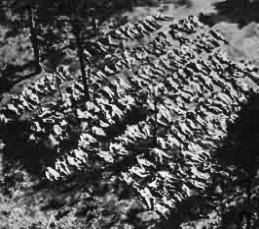 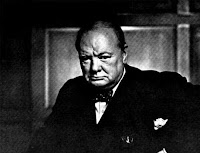 Churchill was indignant. Instead of holding Russia accountable for the massacre, he lambasted the Polish government for having called for an investigation. He said "No resumption of friendly or working relations with the Soviets is possible while they [the Poles] make charges of an insulting character against the Soviet government..." All of Britain was blaming the Poles for trying to "subvert" the alliance between England and the Soviet Union. This gave Stalin the legitimacy he sought as he continued to wield his propaganda against the Poles, and accusing them of collaborating with the Germans.

Meanwhile the Germans reveled in their opportunity to use the information in an attempt to drive a wedge between the Soviet Union and the West. Goebbel's journal dated April 14, 1943 had this entry: "We are now using the discovery of 12,000 Polish officers, murdered by the GPU (aka NKVD), for anti-Bolshevik propaganda on a grand style. We sent neutral journalists and Polish intellectuals to the spot where they were found. Their reports now reaching us from ahead are gruesome. The Führer has also given permission for us to hand out a drastic news item to the German press. I gave instructions to make the widest possible use of the propaganda material. We shall be able to live on it for a couple weeks."

Sir Owen O'Malley conducted an investigation of his own and produced a detailed report that proved that the Soviets were guilty. But Churchill hastily absconded with the report and warned everyone not to ever speak a word about it.


The Allies ordered a media ban which prevented
the public from knowing that
Stalin was the one responsible for the Katyn massacre. 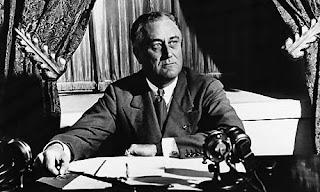 Roosevelt was indifferent to the entire "graves question" as he put it. He was obsessed with his own self-image, and efforts at getting himself re-elected. It caused him considerable worry that he might lose the Polish-American vote, if they were ever to find out that Stalin had broken off diplomatic relations with Poland. The Allies ordered a media ban which prevented the public from knowing that Stalin was the one responsible for the Katyn massacre. The Allies were interested in only one thing - winning the war at all costs, and placating a Soviet monster, Stalin.

Since 1943, the subject of Katyn has not abated. Conflicting opinions and misinformation have circulated for decades. The Russian government has continuously denied culpability, though there is substantial proof that their predecessors were guilty in committing this atrocity.  Notebooks found on the bodies of the Polish officers had entries written that predated April 1940 - the Germans didn't invade Russia until 1941. Two American soldiers who were POWs in Germany were also at Katyn in 1943. One of them, Col. John H. Van Vliet wrote a report which concluded that the Soviets were responsible, and not the Germans. He submitted the report to Maj. Gen. Clayton Bissell (the assistant Chief of Staff for Intelligence), but Bissell chose to conceal the information so as not to "embarass" the Soviets.

In 1990 Mikhail Gorbachev took it upon himself to admit the truth. He announced publicly that it was the NKVD who had executed the Poles, and confirmed two other burial sites, Mednoye, and Piatykhatky. Several months prior, Gorbachev had permitted a delegation of several hundred Poles, organized by a Polish association named Families of Katyn Victims, to visit the Katyn memorial.

On April 13, 1990, the 47th Anniversary of the discovery of the mass graves, the USSR formally expressed "profound regret" and admitted to the truth. The day was declared a worldwide Katyn Memorial Day

Additional evidence was discovered in 1991 and 1992 in what was referred to as "Package No.1" consisting of top secret documents which were released under the auspices of  Russian President Boris Yeltsin, and transferred to Polish President Lech Walesa. 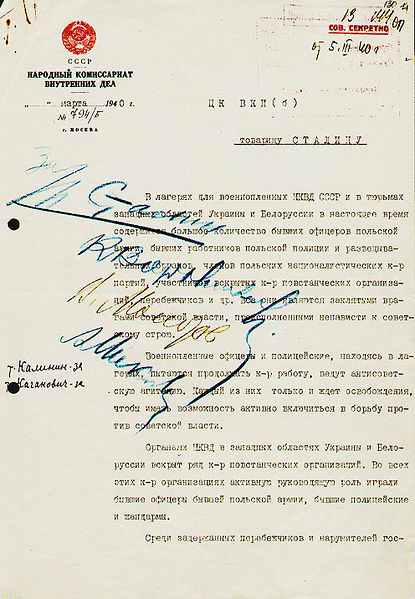 In June 1998, Yeltsin and Aleksander Kwaśniewski agreed to construct Memorials at Katyn and Mednoye.  But in the space of a few months, the tone changed drastically. Russians began to raise the issue of the deaths of Soviet POWs during the Russian-Polish War of 1919-1924. About 16,000 to 20,000 Russian POWs had perished in camps located on Polish soil. They died of communicable diseases yet some Russian officials referred to it as a "genocide comparable to Katyn".

Typical of Russian guile, it was a lame attempt to counterbalance historical facts. Moreover, in March 2005, Russian Chief Prosecutor Alexander Savenkov refused to recognize the Katyn massacre as genocide or war crimes, and alleged that there were 1,803 confirmed deaths of the total of 15,000 Polish Officers from the three Soviet camps. He said, "there is absolutely no basis to talk about this in judicial terms".


116 out of 183 volumes of files gathered during the Russian investigation, were declared to contain state secrets
and were classified

Furthermore, some Russians have tried to confuse the issue by periodically mentioning the town of Khatyn, a former Belorussian village. Apparently, the Germans massacred the entire village of Khatyn in 1943 (but that is not the same place as Katyn, where the Soviets massacred the Poles.)

Last year's tragic death of Polish President Lech Kaczynski shook the Polish nation to its very core. The President was accompanied by his wife Maria, and a delegation of top government and military officials. 97 people perished when their airplane crashed near Katyn.  They were on their way to commemorate the 70th Anniversary of the Katyn Massacre.  No other country had ever suffered a calamity as horrific as this The Polish nation - and Poles around the world were in a state of shock and mourning.  Immediately suspicions were raised and some accusations made against the Soviet government as having been responsible for the crash.  Despite an investigation, it was an accident, yet it does not nor will it ever rule out the possibility of some intervention.  It brings to mind a similar incident during World War II.  Prime Minister Sikorski also met with an untimely death in mysterious circumstances.  His plane crashed shortly after having taken off from Gibraltar and since then the controversy has not ended.  Nor will the controversy about President Kaczynski's death and that of many key figures in Polish government.  The title of a blog on the subject sums up public reaction - Kaczynski was the last victim of Katyn's massacre.

Just days before the crash, Putin invited Polish Prime Minister Donald Tusk to join him in a joint ceremony to commemorate the victims of the Katyn massacre. Putin said the following,


“We are here connected to a shared memory and shame".

"On this road to reconciliation, we set two signposts:
to memory and to truth."

“We are committed to preserve the memory of the past
and we will do it,
no matter how bitter the truth."

The Katyn Massacre will forever be part of the Polish psyche. It cannot be otherwise. History bears witness to the brutality of the Russian government in their attempts to eradicate the Polish nation. The only hope for reconciliation between the Polish and Russian nations is for the Russian government to accept full responsibility and de-classify and release all top-secret and classified documents as well as any and all so-called "Packages" of documentation. Full disclosure is the only key to reconciliation. Tentative apologies are worthless. 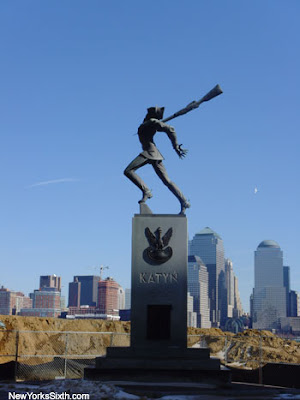 Posted by Polish Greatness Blog at 2:26 AM