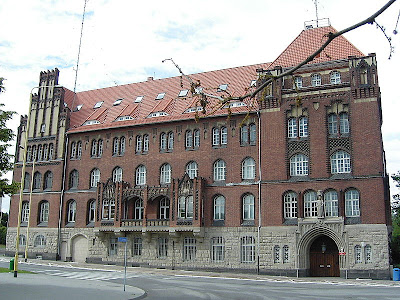 The Ministry of Public Security of Poland

Ministerstwo Bezpieczeństwa Publicznego (MBP) was a Polish communist secret police, intelligence and counter-espionage service which gripped Poland in a state of terror from 1945 to 1954. Under the directorship Jakub Berman

of the Politburo, the Ministry's objective was to eradicate anti-communist organizations in Poland, the socio-political base of the Polish Secret Underground State,

, and the Freedom and Independence  (WiN) movement which was active during World War II.

Polski Komitet Wyzwolenia Narodowego or PKWN. It was formed in
Chelm by Polish communists with the aim of taking control over Polish territories captured from Nazi Germany.

proclaimed the PKWN as  "the only legitimate Polish government" by which he could wield complete political control over Poland.  The PKWN's internal structure was based on thirteen departments called Resorty one of which was the Department of Public Security (Resort Bezpieczeństwa Publicznego) or RBP, headed by Stanislaw Radkiewicz.  The RBP was the precursor of the Polish communist secret police.

By December of the same year, the PKWN expanded to include several members of the London-based Polish government in exile, among them Stanisław Mikolajczyk.. He was later driven out of the country. PKWN was then transformed into Provisional Government of Republic of Poland (Polish: Rząd Tymczasowy Rzeczypospolitej Polskiej or RTRP). Hence all departments formerly named the Department of Public Security became the Ministry of Public Security (Ministerstwo Bezpieczeństwa Publicznego) or MBP.

From the end of the 1940s to 1954, the MBP was among the largest and most powerful institutions in post-war People's Republic of Poland.  It dealt with internal and foreign intelligence, counter intelligence, monitored anti-Soviet activity in Poland and around the world, monitored government and civilian communications, supervised local governments, maintained a militsiya, managed prisons, fire services, rescue service, and border patrol, as well as a number of concentration camps established by the NKVD,

such as the Zgoda labour camp.

In July 1947, the MBP absorbed Section II of the General Staff of the Polish People's Army,

the Polish Military Intelligence. Military intelligence merged with its civilian counterpart to become Department VII of Ministry of Public Security.

By the 1950s the Ministry of Public Security had approximately 32,000 people working within its departments. The MBP commanded over 41,000 soldiers and officers of the Internal Security Corps (Korpus Bezpieczeństwa Wewnętrznego), 57,000 officers in the Civil Militia (Milicja Obywatelska), 32,000 officers and soldiers in the Border guard (Wojska Ochrony Pogranicza), 10,000 prison officers (Straż Więzienna), and 125,000 members of Volunteer Reserves of the Citizens Militia (Ochotnicza Rezerwa Milicji Obywatelskiej ORMO), a paramilitary police used for special actions.

, from the Politburo of the Polish United Worker's Party,

controlled all political and administrative matters of the Ministry. From January 1945,  the structure and organization of the Ministry was under constant change to accomodate its bureaucratic expansion. Its departments were divided into several sections each, and appointed with different duties. The largest and most important department in MBP was called Department One, headed by General Roman Romkowski (nee Natan Grinszpan-Kikiel). Its focus was on counter-espionage and the elimination of anti-state activities. Department I was divided into Sections as follows:

The Secret Office was established in June 1948 to deal with internal counter-intelligence. Its main operation was to conduct surveillance on members of the MPB itself. On March 2, 1949, the Special Bureau was established, renamed in 1951 simply as Department 10 whose activities centered on the surveillance of high ranking members of the Polish United Workers' Party and anybody associated with them.


MBP in the field


The Ministry of Public Security had regional offices throughout Poland, one, or more MBP offices  There was at least one MBP office established in each voivodeship, called the Voivode Office of Public Security (Wojewódzki Urząd Bezpieczeństwa Publicznego, or WUBP). Each WUBP had 308 full-time MBP officers and employees on staff.

According to Professor Andrzej Paczkowski there was one MBP (or UB) officer for every 800 Polish citizens. Never again, in the 45-year-old history of the People's Republic of Poland, were its special services' formations so large in numbers.

The establishment of Soviet military and civilian bureaucracy, and its perpetual change and expansion guaranteed the Soviets political power and virtual omnipotence over Poland during the Cold War. The structure and command of its institutions was visibly and wholly dependent on the USSR

, GRU and SMERSH. (Subsequently, MGB, MVD and KGB.)  The first Soviet chief advisor to the MPB was Major General Ivan Serov. His first posting was in 1939 to the position of deputy commander, then commander of Soviet militsiya of the NKVD. Subsequently he was nominated chief of the Secret Political Department (SPO) of the GUGB/NKVD, then People's Commissar of Internal Affairs of the Ukrainian Soviet Socialist Republic. From 1941 to 1945 he  was appointed the First Deputy People's Commissar of the State Security and later – Deputy People's Commissar of Internal Affairs of the USSR.  In March 1945, he became the main advisor to the MBP in
and oversaw the apprehension 16 leaders of the Polish underground resistance. The Ministry of Public Security was infamous for its repression and brutality and played a key role in the Trial of the Sixteen.

During the German occupation of Poland, the NKBG and NKVD agents had infiltrated the ranks of Armia Krajowa, with the assistance of members of the People's Guard (Gwardia Ludowa) - later renamed the People's Army (Armia Ludowa). When the Red Army occupied Polish territory, the new Ministry of Public Security, supported by the Main Directorate of Information of the Polish Army conducted a flurry of arrests of members of the Polish resistance, in short, anybody opposed to Communist ideology. Dissident members of the Armia Krajowa were imprisoned, deported to Soviet gulags, or executed.

"[...] The interrogations were conducted by two NKVD officers in uniforms, and by [Boleslaw] Halewski. During interrogations he would say that the UB functionaries were learning interrogation methods from the Russians. Halewski tortured me in the presence of the Russians. He was hitting me on the face, and several times kicked me in the groin. After being kicked I felt down from the pain, and the guards had to carry me out of the interrogation room, and then tossed me into the cell. In the cell, I saw from a close distance how Boleslaw Halewski, before the eyes of all prisoners, was kicking one of the prisoners in the groin area. After [the prisoner] fell, he first jumped on his chest, and then he was smashing his face with the heal of his boot. I saw this from the distance of about two meters. I thought then, that this prisoner, whose name I didn't know, died then [...]  *

on an important mission to East Berlin. Swiatlo, deputy head of MBP Department 10, accompanied by Colonel Anatol Fejgin, were sent on a mission to consult with the Erich Mielke, from the  East German Ministry for State Security's to discuss plans for the elimination of Wanda Bronska.

They traveled to Berlin and spoke with Mielke on December 4, 1953. The next day Swiatlo defected to the United States through their military mission in West Berlin.  American military authorities transported Swiatlo to Frankfurt and by December, Swiatlo had been flown to Washington D.C, where he underwent an extensive debriefing.

Swiatlo's defection received wide press coverage in the United States and Europe as well as in Poland via Radio Free Europe. The latter causing much embarassment to communist authorities in Warsaw. Swiatlo had intimate knowledge of the internal politics of the Polish government, in particular that of the activities of the various secret services. In the following months, American newspapers and Radio Free Europe reported extensively on political repression in Poland based on Swiatlo reports, including that of torture of prisoners, and politically motivated executions. Swiatlo also  provided details about struggles within the Polish United Workers' Party.

The communist authorities ordered Swiatlo to falsify evidence that was used to incriminate Władysław Gomułka, who he personally arrested. He had also falsified evidence and arrested  Marian Spychalski, the future Minister of National Defence, who was at the time a leading politician and high ranking military officer.

Major changes were made in the Ministry of Public Security in late 1954 - the result of the highly publicized defection of Colonel Swiatlo as well as the general general hatred of the Ministry among the Polish public.  By December of the same year, the Polish Council of State and the Council of Ministers decided to replace the Ministry with two distinct administrations: the Committee for Public Security (Komitet do Spraw Bezpieczenstwa Publicznego or KDSBP), headed by Wladysław Dworakowski, and (Ministerstwo Spraw Wewnetrznych or MSW), headed by Wladyslaw Wicha.  In consequence the number of employees of the headquarters of Committee for Public Security was reduced by 30% and by 40–50% in local offices. The massive network of secret informers was also greatly reduced, followed by the arrest of many functionaries of the Ministry of Public Security. Also severely curtailed were activities in surveillance and repressive measures.  In the majority of factories in Poland, the network of agents spying on workers was secretly disbanded.

The Committee for Public Security controlled intelligence and counter-espionage activities, government security and the secret police and from September 3, 1955 to November 28, 1956 it also controlled the Polish Army's Main Directorate of Information (Glowny Zarząd Informacji Wojska) - which ran the Military Police and counter espionage service. The Ministry of Internal Affairs was responsible for the supervision of local governments, the Milicja Obywatelska police force, correctional facilities, fire and rescue forces, and the border guard. In 1956 the Committee was dissolved although many of its functions were merely absorbed into the Ministry of Internal Affairs. The secret police was renamed to the 'Security Service.

The Most Infamous and Hated MBP personnel


Notable people who were murdered by the MBP

Posted by Polish Greatness Blog at 4:38 AM

Email ThisBlogThis!Share to TwitterShare to FacebookShare to Pinterest
Labels: MBP, Ministry of Public Security of Poland