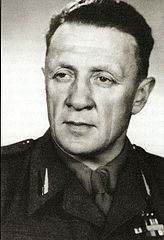 (Home Army), and fought in the Warsaw Uprising,  and organized the secret police force. He was also known by his codenames: Żmudzin, Biały, Bielski, and/or Cichocki.

Kontrym was born in Zaturka near Luck (Wolyn) He began his military career in March 1915, when he volunteered with the Imperial Russian Army

.  Initially he served in the 106th Infantry Regiment  for which he completed NCO
training in Saratov.

Kontrym enlisted in Polish Army units that were formed in Russia; from 1918 he served in the 5th Polish Cavalry Regiment of the II Polish Army Corps but in May of the same year it was disarmed and interned by the Germans at Kaniow.  Kontrym escaped from the German POW camp and attempted to join Polish Army units in Murman, Russia but on October 1918 he was arrested by the Bolshevik Cheka and conscripted into the Red Army. He fought against the Polish Army as a commander of 82 Infantry Regiment and 28th Brigade of the 10th Infantry Division.

For his leadership and bravery, he was awarded the Order of the Red Banner three times. On February 1921, he was transferred from his unit to study at the Frunze Military Academy.  At the Academy he contacted Romuald Wolikowski, the Polish Military attaché  to whom he passed Soviet military secrets. When his espionage activities were discovered and he had to escape to Poland.

Kontrym served in the Polish 1st Independent Parachute Brigade. Member of Cichociemni. He also fought with distinction in the Warsaw Uprising.

He was arrested by the Sluzba Bezpieczeństwa and executed for treason. The date of his death is obscure - either on the 2nd or 20th of January 1953.

Posted by Polish Greatness Blog at 1:11 AM