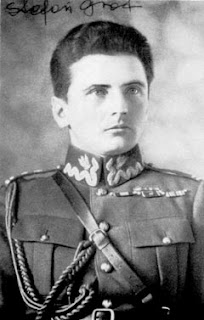 (Home Army).  He was murdered by the Gestapo in prison on the direct order of Heinrich Himmler.

Rowecki was born in Piotrków Trybunalski and was one of the organizers of the secret scouting organization. During World War I he was conscripted into the Austro-Hungarian army and later in to the First Brigade of the Polish Legion. In August 1917 he was interned in  after the majority of his unit had refused to pledge loyalty to the Emperor of Austria. He was released in February 1918 from the internment camp in Beniaminów and joined the Polnische Wehrmacht, and after the establishment of the newly independent Poland, he joined the Polish Army.

Rowecki fought in the Polish-Soviet war

(1919–1920) after which he remained in the army and organized the first military weekly periodical (Przegląd Wojskowy). From 1930 to 1935, he commanded the 55th Infantry Regiment in Leszno.

World War II
Though Rowecki began organizing the Warsaw Armoured Motorized Brigade ( Warszawska Brygada Pancerno-Motorowa, 7TP, TKS tanks)in June 1939, it did not reach full mobilization when Germany invaded Poland on 1 September 1939.  His unit did however take part in the defense of Poland.

After the Polish defeat, Rowecki was able to evade capture and returned to Warsaw. The following month, Rowecki became one of the leaders, then commander (in 1940) of the Związek Walki Zbrojnej. From 1942, he was commander of the Armia Krajowa (Home Army).

In 1941, Rowecki organized sabotage in the territories east of the Polish pre-war borders Wachlarz. On 30 June 1943 he was arrested by the Gestapo in Warsaw and sent to Berlin, then imprisoned at Oranienburg. There he was questioned by many high-ranking Nazi officials including Ernst Kaltenbrunner, Heinrich Himmler and Heinrich Müller. They offered him an anti-bolshevik alliance, but refused. He was in Sachsenhausen

Rowecki's arrest was due to his betrayal by Ludwik Kalkstein "Hanka", Eugeniusz Swierczewski "Genes" and Blanka Kaczorowska "Sroka" who were Gestapo agents. All were members of the Home Army but in fact collaborated with the Gestapo.

Swierczewski, Kalkstein and Kaczorowska were sentenced to death for High Treason by the Secret War Tribunal of the Polish Secret State. The sentence on Eugeniusz Swierczewski was carried out by troops commanded by Stefan Rys ("Jozef"). They hanged Swierczewski in the basement of the house at 74 Krochmalna Street in Warsaw. Kalkstein received protection from the Gestapo and was not harmed. He went on to fight with a Waffen SS unit during the Warsaw Uprising

of 1944 under a fictitious name of Konrad Stark. Following the end of World War II, he worked for the Polish Radio station in Szczecin and was later recruited as an agent by the Urząd Bezpieczeństwa. In 1982, he emigrated to France. Blanka Kaczorowska also survived the war. Her death sentence was not carried out because she was pregnant. at the time. After the war, she also worked as a secret agent for the Urząd Bezpieczeństwa and later for the renamed Służba Bezpieczeństwa. She emigrated to France in 1971.

The Gestapo also arrested the commander of Narodowe Siły Zbrojne (NSZ), Colonel Ignacy Oziewicz on 9 June 1943 and barely a month later, General Wladysław Sikorski died in plane crash under mysterious circumstances. Within a period of two months, the Polish Army had lost three top commanders. The controversy continues to this day.


Editors Note:  FYI:  The images of medals posted here may or may not be the exact version which was awarded to the recipient.  There are several classes for each medal depending on various factors such as type of military (or civilian) service, rank of officer (or soldier), class of award, year in which it was awarded, etc   The lack of sufficient information on the web (or omission) has compounded the difficulty in selecting the correct class of medal. I apologize for any inaccuracies.
Posted by Polish Greatness Blog at 1:38 AM