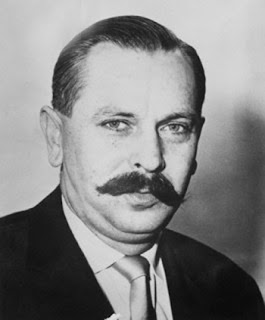 , the deputy head of military counter intelligence GZI WP, and later became head of the technical and scientific section of Polish intelligence, and a spy for the Soviet government during the 1950s.

His code names were "SNIPER", and "LAVINIA"

. It resulted in the exposure of George Blake and Harry Houghton. Goleniewski defected to the US in 1961. He later claimed to be Tsarevich Alexei Nikolaevich of Russia.

He stated that he was head of the Technical and Scientific Department of the Polish Secret Service from 1957 to 1960. During that time he was spying on Polish Intelligence operations

In early 1959, Goleniewski became a triple-agent, and anonymously supplied the CIA with Polish and Soviet secrets.  The CIA dubbed him the "SNIPER" while MI5 gave him the code name, 'LAVINIA".

In April 1959 the CIA informed MI5 that according SNIPER, whose real name was unknown at the time, claimed that the UB had someone working inside the Royal Navy, the agent, who later was discovered to be Harry Houghton.

The CIA also reported to MI5 that SNIPER had received top secret documents from a Soviet mole inside MI6.The mole himself turned out to be George Blake, who heard the news that the CIA had a top-level informant in Poland - sent word back to the KGB who in turn passed the information to the UB. Goleniewski heard the news from the KGB, and immediately escaped.

He defected to the United States in January 1961and went to work for the CIA, which led to the capture and imprisonment of Soviet agents operating in Britain including the Portland Spy Ring and George Blake.

The Polish government sentenced Goleniewski to death in absentia. Meanwhile, a private bill, H.R. 5507, was introduced in the U.S. Congress in July 1963 to make Goleniewski an American citizen. Legislation was passed by both the United States House of Representatives and the United States Senate.

Claim made that he was Tsarevich Alexei

Goleniewski began to claim that he was Tsarevich Alexei Nikolaevich. But it was commonly known that Alexei was murdered together with his family by the Bolsheviks at Ekaterinburg in Russia on 17 July 1918. Nevertheless, Goleniewski claimed that Yakov Yurovsky, one of the assassins, saved the family and helped them to escape. Supposedly, the entire family traveled to Poland via Turkey, Greece, and Austria. He went on to say that the family lived in hiding in Poland.

Guy Richards, an author pointed out that he was not the first Tsarevich Alexei claimant to emerge from Poland. In 1927, a pretender by the name of Eugene Nicolaievich Ivanoff had appeared from the same part of that country making similar claims and generated a brief flurry of publicity in Europe and North America.

Incidentally,Tsarevich Alexei, who was born in August 1904, was a haemophiliac. Goleniewski was born in 1922, making him eighteen years younger than the Tsarevich though he claimed that the haemophilia made him appear younger than he really was. Apparently, he claimed that his haemophilia had been confirmed by Dr. Alexander S. Wiener, who had co-discovered the Rh factor in human blood but this claims was never substantiated.

Goleniewski met one of the Grand Duchess Anastasia Nikolaevna of Russia claimants, Eugenia Smith, in 1963, a meeting which was covered by Life magazine. Goleniewski claimed that Smith was his sister Anastasia and she in turn claimed to have recognized Goleniewski as her brother Alexei.  However it contradicts claims she made in her book where she was the sole survivor.

Goleniewski's claim caused considerable embarrassment for the CIA and he was put on a pension and his employment terminated in 1964.

Based largely on heresay is the story that in 1942 Wehrmacht soldiers claimed that Goleniewski was the Tsar Nicholas II, and that he was living on a large estate guarded by the SS.

What makes this story so astonishing is that Goleniewski had detailed information about alleged Tsarist money. It sparked an investigation but no information could be found to explain how he obtained the information or even it were accurate. Goleniewskis' claims are detailed in the books "Lost Fortune of the Tsars

" by William Clarke, and "Hunt for the Czar" by Guy Richards ( who apparently seems to support Goleniewski's claim.)

On September 30, 1964, Goleniewski married his pregnant girlfriend, Ingrid Kampf using the name Alexei Romanov. A few hours later their daughter Tatiana was born, which was eventually followed by a breakup of the marriage.

Goleniewski lived the rest of his life in Queens, New York and had always insisted that he was Tsarevich Alexei. He condemned the Russian government, and the Russian Orthodox Church for mistreating him. Few believed his claim.


source: Wikipedia
Posted by Polish Greatness Blog at 4:21 AM