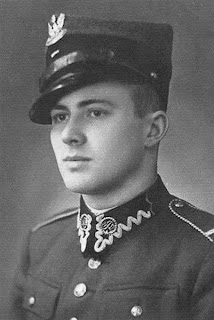 (October 3, 1914 Berlin – January 20, 2005) was a Polish journalist, writer, politician, social worker and patriot. He fought in World War II and was one of the most famous resistance fighters of the Home Army. He is best remembered for his work as an emissary shuttling between the commanders of the Home Army and the Polish Government in Exile

in London and other Allied governments. For that and for his participation in the Warsaw Uprising, he earned the nickname "Courier from Warsaw

After the war he worked as the head of the Polish section of Radio Free Europe, and later as a security advisor to the US presidents Ronald Reagan and Jimmy Carter.

He was born Zdzisław Antoni Jeziorański, (Jeziora Coat of Arms) but throughout his career used several code names during the war, the best known was Jan Nowak which he took as his surname.

Jeziorański was born in Berlin and after finishing his studies in economics in 1936, he was employed as a teaching assistant at Poznań University. When war broke out in September 1939, he enlisted in the Polish Army and fought as an artillery NCO. He was taken prisoner of war by the Germans in Volhynia, but managed to escape and returned to Warsaw. Most of his colleagues were taken prisoners of war by the Soviets and later murdered in the Katyn Massacre

He immediately joined the Polish resistance

and after 1940 became the main organiser of the Akcja N.
It was a secret organisation which prepared German-language newspapers and other propaganda

and the Polish Government in Exile

and other allied governments, he informed Western governments of the fate of Poland under German and Soviet occupation.  He was also the first to report on the Warsaw Ghetto Uprising

. In July 1944, after having returned from one of his missions abroad, he returned to Warsaw just days before the Warsaw Uprising began. He took an active part in the battles against the Germans as well as organising daily Polish radio broadcasts to Allied countries in both Polish and English.

Shortly before the Warsaw's capitulation Commander-in-Chief Tadeusz Bor-Komorowski ordered Jezioranski to leave Warsaw and make his way to London; he was able to avoid being captured and arrived in Great Britain, bringing with him large collections of documents and photos. He was decorated with the Virtuti Militari, Poland's highest military medal, in recognition of his bravery and missions throughout German-occupied Europe.

After the war Jan Nowak-Jeziorański immigrated to the West, and settled ,initially in London, then in Munich and Washington. From 1948 to 1976 he was one of the most notable personalities of the Polish division of the BBC radio agency. In 1952 he was appointed head of the Polish section of the Munich-based Radio Free Europe

. His daily radio broadcasts made him one of the most popular radio personalities in both communist-occupied Poland, and Polish communities around the world.


In 1976 he gave up his posts to become a member of the Polish American Congress, which he headed from 1979 to 1996. He was worked as an advisor to the American National Security Agency and the presidents of the USA Ronald Reagan and Jimmy Carter. With his many contacts with powerful politicians in the US, he was one of the advocates of Poland's membership in NATO

During the 1990s he collaborated on a production of Polish Radio writing a series of broadcasts titled Polska z oddali (Poland from a Distance). Since 1990 he also appeared regularly on Polish television as writer-presenter of monthly programs.  He returned to Warsaw in July 2002  for the last time.

He actively supported Poland's entry into the European Union

. Many of his books, published in Poland and abroad were best-sellers and gained him even more popularity.

Jezioranski was awarded some of the most prestigious Polish literary awards, including the Kisiel Award in 1999) Ksawery Pruszyński Memorial Prize of the Polish Pen-club in 2001 and the Superwiktor award recognizing the contribution of television personalities. In 2003 he was also awarded the Człowiek Pojednania prize by the Polish Council of Christians and Jews for his participation in the Polish-Jewish dialogue.  Finally, he received the doctor honoris causa from many Polish universities, including the Warsaw University, Jagiellonian University and his alma mater, the University in Poznań.

He died in Warsaw on January 20, 2005. He donated all his archives to the Ossolineum institute.

Editors Note:FYI: The images of medals posted here may or may not be the exact version which was awarded to the recipient.There are several classes for each medal depending on various factors such as type of military (or civilian) service, rank of officer (or soldier), class of award, year in which it was awarded, etc& The lack of sufficient information on the web (or omission) has compounded the difficulty in selecting the correct class of medal. I apologize for any inaccuracies.;

Posted by Polish Greatness Blog at 1:17 AM