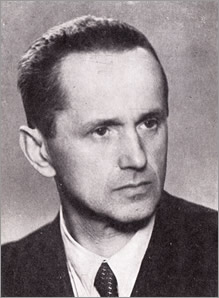 ) and Head of the Bureau of Information and Propaganda in the last Polish Army General Headquarters and Polish Home Army. His code names were "Borsuk", "Grawer", "Maurycy", Rafal",  In August 1946 he was arrested by the communists and sentenced to ten years imprisonment.  It was later reduced to five years.

While in prison he was tortured, deprived of medical attention, and was not allowed outside of  his cell for a period of 6 years and 3 months. He had no contact with the outside world for 4 years and 6 months, - family letters, books, newspapers were prohibited and forbidden to shower for 2 years and 10 months.

In 1949, in order to humiliate him the Soviets forced him to share the same prison cell withh SS-Gruppenfuhrer Jurgen Stroop, who was responsible for the destruction of the Warsaw Ghetto.

On November 8, 1953, Moczarski was sentenced to death but his sentence was changed to life in prison. In April 1956 Moczarski was released from prison in Wronki, acquitted on all counts as well as rehabilitated by a court in December 1956. He later published a book entitled "Conversations with an Executioner" chronicling his conversations with the notorious Jurgen Stroop

During the investigation proceedings launched against me on the grounds of my alleged collaboration with Germans (I was faulted with left-wing uncovering activities) - in the period from 30 Nov 1948 to 22 Sep 1952 - the following officers and non-commissioned officers of the former Department of Investigation [of Polish Secret Police from the Ministry of Internal Security - (MBP): Lt Col Dusza Jozef, Maj Kaskiewicz Jerzy, Capts Chimczak Eugeniusz and Adamuszek Adam, Sc Lt Szymanski Tadeusz, Staff Sgt Mazurkiewicz and Sgt Stanislaw Wardynski ([vel] Wardenski or Wardeski) employed the following 49 types of torture and battery against me:

Beating of the whole body ("any possible spot") with:

Beating of particularly sensitive areas of the body:

of the eye and lip area with a glowing cigarette (Chimczak)
of the eye and lip area with a glowing cigarette (Chimczak) of each hand's fingers with a burning torch (Dusza, Kaskiewicz, Chimczak) Crushing each hand's fingers placed between two pencils (Dusza, Kaskiewicz) Crushing each foot's toes (jumping on my feet) - (Dusza, Kaskiewicz, Chimczak) Kicking legs and torso (Dusza, Kaskiewicz and Sgt Stanislaw Wardynski) Kicking shin area in particular (Dusza, Kaskiewicz, Chimczak) Stabbing with pins and nibs, etc. (Dusza, Chimczak) Face and ears pinching with a hand and key (Chimczak) Forcing me to sit on the edge of the stool (Dusza, Chimczak) Forcing me to sit on a bolt hurting my rectum (Dusza) Cuffing my hands with American automatic handcuffs which was followed by tearing them off my wrists (Dusza with a platoon Sgt Tadeusz Szymanski) Physical exercises - forcing me to do knee bends until I swooned (Dusza) Forcing me to run up and down the stairs for about 20-30 minutes - with the ward supervising at Lt Col Dusza's command) Solitary confinement for indefinite time (also naked) - (Dusza) Sleep deprivation for the period of 7-9 days through waking me (I was standing in a freezing cell) with continuous slaps on my face performed by the guarding officer of the former MBP. The method called Beach or Zakopane pushed me into semi-dementia and resulted in mental health problems - visual and auditory hallucinations - their symptoms resembled the body's condition after taking mescaline or peyote (Dusza with wards) Standing to attention in a prison cell for indefinite time (Dusza with inspecting officers and wards of Mokotow Unit 11 and later (after 11th Nov 1950) Mokotow Block A Standing to attention in a prison cell and interrogation room with my hands raised above my head for indefinite time (Dusza with inspecting officers and wards of Mokotow Units 10 and 11) I was not allowed to receive parcels from my family (every week my sister would send parcels with food, although - according to the regulations at that time - I was allowed to collect merely 10 - 15 out of 70 parcels. The remaining number on Dusza's orders was not returned to my sister. Reduction in food rations (during the peak period of my investigation I would be given only 0,5 of coffee, about 350 grams of bread and a litre of thin soup daily). Furthermore, there were times when I would not be allowed to have anything to drink - the torture of thirst on Dusza's orders Security checks in my cell, at nights when - after waking - I was forced to stand to attention, unclothed and in a freezing draught for up to an hour (the torture was supervised on Dusza's orders by an inspecting officer - called Hiszpan or Gruby - of Unit 10 and wards.) Removing windows from my cell (October 1949) for 24 hours while I was sleeping under 1 blanket, partly touching the concrete floor (1 pallet shared between 3 prisoners). The torture was supervised by an inspecting officer of Unit 11 with Mazurkiewicz, a ward, all that at Dusza's orders. Pouring buckets of water in to the cell regularly. The torture was supervised by an inspecting officer of Unit 11 and the wards - Mazurkiewicz and Stanislaw Wardeski. All of that on Dusza's orders. Medical help deprivation, although I was ill (urinating blood for 1,5 month). I was suffering at Dusza's orders until dr Kaminska's medical attention (very caring attitude) to all prisoners from Block A. I was not allowed to have open air [outside] walks and [was] prohibited from leaving the building for the period of 6 years and 3 months on Dusza's orders until 22nd September 1952 when I had my first walk in cell 22 of Mokotow Block A. In addition, I could not have showers for the period of 2 years and 10 months,

Vulgar and elaborate verbal insult aimed at me and my family members. The abusers included Lt Col Dusza, Maj Kaskiewicz, Capt Chimczak and inspecting officers of Mokotow Unit 11 (Mazurkiewicz, Wardynski and others). While in Unit 11 I was continually bullied by the inspecting officers and wards on Dusza's orders. I was deprived of any contact with the family (not a single letter or a piece of news from my mother, wife and sister for the period of 4 years) or the outside world (no newspapers etc.) or books (from 30th Nov 1949 to 6th Nov 1952 I did not read a single printed word). All of those on Dusza's orders. I was subject to moral tortures of the following types: an official (yet false) statement - read to me by Col Rozanski in the presence of Capt Dusza - that my wife, Zofia Moczarska, whom I love dearly, died of tuberculosis b) an insinuating statement (additionally embellished with crude remarks and insults) of Capt Chimczak concerning an alleged unethical conduct of my wife.
I was subject to moral tortures supervised by: Maj Kaskiewicz who, similarly to other investigating officers, called me a Nazi and wrote the word in bold on my forehead with an acrylic pencil. Furthermore, he would not allow me to wash it off and I was forced to wear it in my cell and during the interrogation. Lt Col Dusza who - in order to humiliate me - ordered to place me in one cell with Nazis (the executioner of the Warsaw Ghetto - SS Gen. J. Stroop among others. Lt. Col.Dusza Jozef, Maj.Kaskiewicz Jerzy, Capt.Chimczak Eugeniusz, Lt. Adamuszek Adam, an inspecting officer Ludwik Wlodarczyk, whom prisoners called Hiszpan or Gruby (currently one of the three inspecting officers of Mokotow Block A and wearing lieutenant uniform or civilian clothes; in 1949 he used to have a badge of the participants in the Spanish Civil War pinned to his jacket lapel; he is about 5.8 ft, obese, 40-something-year-old), the following inspecting officers: Tadeusz Szymanski (recently a Sc Lt of Mokotow Unit 10), Mazurkiewicz (recently a Staff Sgt for general purposes in Mokotow), Wardynski (Wardenski or Wardeski) Stanislaw (recently a Staff Sgt in Mokotow Prison) and many others, whose names I do not know, employed all previously described tortures and abusive methods against me with the consent and in the presence of Cols Jozef Rozanski and [Anatol] Fejgin as well as the Deputy Minister - general [Roman] Romkowski. The latter declared - around 30th Nov 1948 and in the interrogation room situated on the first floor of Unit 10 as well as in the presence of Col Rozanski - that I will experience a "living hell" - and apparently he was right about it. I would also like to stress that not all of the investigation and inspecting officers of Unit 10 and Block A and not all wards, although clearly instructed and ordered as to the methods of torture and abuse, would gladly and eagerly employ them against me.

" The initial fragments of K. Moczarski's letter to the Chief Military Prosecutor Office dated 14 February 1955 are published in accordance with the description enclosed in K. Moczarski's letter to a solicitor, Wladyslaw Winawer, and sent from prison in Sztuma on 25th February 1955 - a typescript copy from the collection of Aniela Steinsberg. The content of this document, and its translation is being published here under the Greater Public Good doctrine.   Translated by Katarzyna (Kasia) Urbaniak

Notes: Maj. Jerzy Kaskiewicz, one of many of Moczarski's tormentors died in December 1999, and until his death lived on Spacerowa Street in Warsaw. "

Posted by Polish Greatness Blog at 4:34 AM