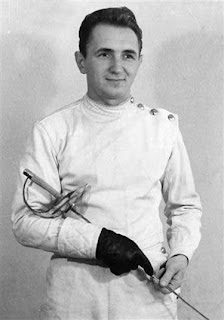 While still serving as Major in the Polish Army, Pawlowski won the Gold Medal in the individual men's saber event at the 1968 Summer Olympics in Mexico City, the first non-Hungarian in 48 years to do so. He took part in a total of six Olympic Games from 1952 to 1972, garnering additionally three silver medals and a bronze at the 1956, 1960 and 1964 Summer Olympics.

In 1967 the International Fencing Federation declared him the best fencer of all time.

He was arrested on April 24, 1975, and sentenced on April 8, 1976 by a military court in Warsaw to 25 years' prison, 10 years' suspension of civic rights, demotion to private,and forfeiture of all his property. He was charged for spying since 1964 on behalf of an unnamed NATO country, and his name was stricken from Polish sporting records. In fact, he was a double agent for the United States CIA from 1964, and for Polish intelligence

Ten years later, he was to have been included in one of the spy exchanges at Berlin's Glienicke Bridge but chose instead to remain in Poland. He spent the rest of his life as a painter and faith healer in Warsaw, where he died.


Suggested Links:
The Broken Saber
Sport: Records All Around
Posted by Polish Greatness Blog at 12:06 AM