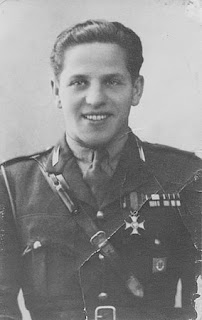 In 1939 Jozef was twenty years old and a member of the Border Security Corps, the Polish Patriot Military called the KOP (Korpus Ochrony Pogranicza). He was stationed at Iwieniec, a small borderland city just sixteen miles from Minsk [then Russia, presently Belarus]. His unit fought in several skirmishes with the invading Germans near the Czech border until the end of organized resistance. When  Jozef returned home to northeast Poland it had been occupied by the Soviet Union. The NKVD

were making arrests and deporting people, in particular Polish patriots, including Jozef and his brother Jan Niedzwiecki, who were beginning the formation of an underground resistance.

While they were walking together on a road near Iwieniec, Jozef and Jan were surrounded and arrested by the NKVD. They had been betrayed and denounced as former military and as enemies of the new regime and were were imprisoned in the NKVD prison in Minsk. The NKVD subjected them to daily interrogations and beatings, as well as applying subtle psychological strategy to discover information about underground activities.

Jozef and his brother endured months of physical and psychological abuse but still refused to cooperate. That they held out for so long proved to be their salvation - when Germany attacked Russia on June 22nd, 1941, the Niedzwiecki brothers had the chance to escape. As the Soviets retreated, they forced the prisoners on a march eastward. In the panic and confusion, Jozef and Jan and a third man seized the opportunity and escaped. They walked back to Iwieniec and survived by eating raw vegetables found in fields along the way. Upon their return they rejoined the growing conspiracy.

as "Zgrupowanie Stolpeckie".  Niedzwiecki served in the 27th cavalry under Zdzislaw Nurkiewicz, and became a squadron leader and his unit initiated many actions against the Germans. The operations were very well planned and had many successes with few casualties among the AK.


During the "Iwieniec uprising" of June 19, 1943, they annihilated the German garrison, killing over one hundred Germans and siezing a large cache of weapons, with only three AK men lost.  At the same time they were able to free prisoners and headed off a proposed roundup of men by the German authority. Among the three Poles killed was Jan Niedzwiecki, killed by a grenade while storming the Waffen-SS Panzergrenadieren.

Meanwhile Soviet partisans were increasing in the Naliboki region. Though they far outnumbered the Poles, they did not match the success that Poles had in actions against the Germans.  Nevertheless, the Soviet objective was to despoil, rape, and murder the Polish population. Despite this, the commanders of the Home Army were instructed by leadership in London and Warsaw to combine efforts with the Soviet partisans against the "common enemy" of Nazi Germany.

In reality the Soviet leadership was secretly undermining the Poles. NKVD operatives acted as informants to the Gestapo, informing them on where to find AK members. During joint actions undertaken by the Polish and Soviet forces,  the Soviets would sometimes withdraw and expose the Polish troops to German ambush. Spies infiltrated the AK units.

By the end of 1943, Soviet General Ponomarenko proposed a plan to Stalin that would eliminate all patriotic Polish Units in the region. It was the same devious ploy that had worked in the Wilno area, when Polish partisans were surrounded and murdered after being lured to a "friendly" meeting.

Several partisan detachments were sent the secret order. At this time, the Bielski Brothers' camp, subject of the movie "Defiance", was subject to Soviet command and had sent about fifty men for this action. At first the Bielskis and other partisans had friendly relations with the local Polish army, often sharing meals and even games of chess however, it was a ruse that would be eclipsed by the sinister goals designed by Stalin and his NKVD.

On December 1st, 1943, near Niestorowicze, AK command met with the Soviet Partisans at the request of Soviet General "Dubov". As soon as the Poles arrived they were surrounded and disarmed. The officers were arrested and taken away. Some were flown to Moscow for trial, the others were never seen alive again. The Soviets then launched surprise attacks on nearby Polish camps and shot any Poles who resisted. Some were first beaten and tortured, their bodies later discovered with ears and fingers cut off. The other captured soldiers were forced to serve in Soviet units. When it became clear that the Poles would not declare allegiance to Communism, the Russians began shooting them in the back while they traveled through the forest. Dozens of the Poles managed to escape and made their way back to the remnants of the AK.

The ranking officer, Adolf Pilch, was not captured and he soon linked up with Zdzislaw Nurkiewicz and most of the cavalry (who had not gone to the meeting). They then began gathering the scattered AK men.

The situation had become desperate. They had lost their leaders, many men, and most of their weapons. They were now being hunted by two enemies, and the NKVD resorted to murdering many families.Several small villages were entirely wiped out.


The following is a translation of secret order issued by Stalin.

On the first day of December, 1943, exactly at 7a.m., in all areas and inhabited parts of the district begin to disarm all members and groups of the Polish [partisan] legion.
All taken arms and printed evidence to be recorded.  Disarmed members and groups to be delivered to the Polish cap named Mklaszewski, in the vicinity of Nesterowich village, township of Iwieniec.

Should there be any resistance on the part of the Polish partisans them must be shot on the spot.

From the moment of receiving this order it should be immediately dispatched, in strictly classified letters, to the operating areas of your Groups, Companies, and Platoons, for the execution of this order.

REPEAT:  Order to be kept in strict secrecy. The leaders and commanding officers will be responsible for keeping this secret.

It was absurd - orders continued to come from Warsaw by radio broadcast which still instructed the men to report themselves to the local Soviets for joint actions. A few days later Jozef Niedzwiecki's squadron captured members of the "Stalin

brigade" after surrounding them. Niedzwiecki discovered a copy of this secret order on a Russian officer, detailing the planned betrayal. The Poles now had proof of Stalin's intentions for the Polish Home Army.

When the local German authority realized what had occurred, they sent envoys proposing an alliance with the Poles against the Russians.  This was unacceptable to Pilch and the Polish men, but in their desperate struggle for survival they struck a modified agreement -  a temporary ceasefire against the Germans in exchange for weapons. The Germans complied and left caches of supplies in locations where the Poles could acquire them. This agreement saved the Polish resistance and many family members in the region, but was damaging to their reputation.

For the next 45 years of Communist control, Pilch and his men were labeled as "Nazi collaborators" and "fascists". In some literature this condemnation still exists to this day. Some accounts by Soviet partisans, not wishing to own up to their actions, accused the Poles for the events of December 1st, saying that the AK had been "killing Jews", or had been "working for the Germans". These claims are disproven easily.

Soviet archives have documented evidence to prove that the betrayal of the AK was a plan from the highest level for political purposes. The fact was that Milaszewski's men did have friendly relations with Tuvia Bielski, but also had a record of warning the local Jewish ghettos about German plans, as well as helping individual Jews escape. The Home army had orders to treat all ethnic groups well. They launched many attacks against the Germans, with such success that the local Nazi command accepted the temporary ceasefire.

During the winter of 1943-1944 many more Poles joined  the Polish partisans so that their ranks were restored in strength and size. They began inflicting heavy losses on the Soviet partisan brigades. As the Russian front moved West, the group vacated the region and headed South. They used the chaos of the German retreat to move their army of about nine hundred all the way to Kampinos forest near Warsaw.

The group became part of "Grupa Kampinos". The Kampinos Group fought many battles against the Germans before, during, and after the Warsaw uprising. On the night of September 3rd, 1944, Niedzwiecki lead his unit in a surprise attack on the infamous SS RONA also known as the "Kaminsky Brigade". The attack, in the town of Marianow, virtually annihilated the brigade to the extent that it  ceased to exist as a unit. Over two hundred SS men were killed or injured with only one AK man lost. The previous night Adolph Pilch had destroyed the other camp of SS RONA in the village of Truskaw with similar results.

At the end of September, the Kampinos group came under heavy attack near Zyrardow. Niedzwiecki was commanding his men in a defensive line when he was knocked unconscious by a bomb blast/ The next morning he and the young aid who stayed with him were captured and arrested by the Germans. They spent the remainder of the war as POWs in Stalag XB until it was liberated by the British.

Niedzwiecki and his fellow AK men were devastated to witness their beloved homeland fall into the treacherous hands of the Communists, after all  their hardship and sacrifice. Niedzwiecki's knowledge of the true nature of the Soviet partisans and the NKVD compelled him to sever all ties with family who still remained in Poland, to ensure their safety. His beloved home near the Niemen river and Naliboki forest ceased to be a part of Poland.

The men of Zgupowanie Stolpeckie/Grupa Kampinos fought in over two hundred successful battles. Their list of accomplishments is a testament to the Polish character and the bravery of the Home Army.

Joseph Niedzwiecki had led his men in numerous engagements against two enemies, and had survived arrest, torture, and two bullet wounds before being injured for a third time at Zyrardow

He was awarded the Virtuti Militari, Poland's highest medal for valor.

He lived briefly in England before settling in the United States. Many men from his unit who remained in Poland, like Zdzislaw Nurkiewicz, were persecuted and arrested. Many were killed after the war by the new regime, punished for their patriotism and loyalty.


Editors Note:  FYI: Though the above medal is correctly identified, please note that the image I have posted may or may not be the exact version which was conferred upon the receiver.  There are many grades within each category of medal which depend on factors such as type of military (or civilian) service, rank of officer (or soldier), class of award, year in which it was conferred, etc  The difficulty in identifying the correct medal is compounded by the fact that image sources on the web fail to specify the necessary details about each medal. I do apologize for the unavoidable generality in this matter.
Posted by Polish Greatness Blog at 1:15 AM