At the close of WWII and under the yoke of Soviet tyranny, the communist-led government in Poland sought to quash Polish dissent by eroding public support for the Catholic Church in Poland. Under the aegis of its founder, Boleslaw Piasecki,  Catholic PAX Association was created. It vigorously supported the Stalinist trial shows of the Krakow Curia, which proclaimed death penalties against Catholic priests (falsely) found guilty of treason.  It was a hunt to convict and imprison as many Polish clergymen as possible. Among them were Bishop Czeslaw Kaczmarek and Cardinal Stefan Wyszynski.

Amid the maelstrom, Tadeusz Mazowiecki became a member of the Catholic PAX Association, a liaison that lasted from 1945 to 1955.  Throughout this period PAX made vigorous appeals in an effort to influence public policy issues, competing against the conservative clergy of the interwar period. It culminated in the arrest of hundreds of priests in the early 1950s, by the State Security.  During the Stalinist period in Poland, Mazowiecki was the editor-in-chief of the Catholic periodical called Wroclaw Weekly (WTK - Wroclawski Tygodnik Katolicki). He also published a pamphlet entitled "The enemy remains the same", which alleged an alliance between Polish anti-communist Resistance and Nazi war criminals.  Needless to say, all this was propaganda fodder, wielded by the Soviets to defame and undermine Polish dissidents.

Mazowiecki was one of the founding members of the Club of Catholic Intelligentsia (Klub Inteligencji Katolickiej) or KIK,  which was anti-communist, and Catholic-center in scope.  KIK was established soon after "Gomulka's Thaw", a period in history also referred to as the "Polish Thaw" or "Polish October".  It marked the drastic transition of Polish politics in the later part of 1956, that is, the deaths of Joseph Stalin, and of Polish communist leader Boleslaw Bierut. It resulted in the weakening of the Stalinist faction to a shadow of its former self and set into motion a series of events which began to (albeit temporarily) loosen the Soviet grip on Poland. Throngs of workers in Poznan staged protests against the communist government led by Wladyslaw Gomulka, who became leader of  the reformers' faction.  But ultimately, any hopes for liberalization were quashed as Gomulka's regime became more oppressive. The Soviet grip was tightening once again.

Mazowiecki was a representative in the Sejm (Polish Parliament) from 1961 to 1971 and served several terms as a member of Znak, the Catholic Party.   He brought up the issue during a session of the Sejm, concerning the students' demonstrations of March 1968. There were massive student protests against the communist government across the country which resulted in severe crack-down by security forces.(Mazowiecki was later expelled from PAX for creating internal opposition.)

When the 1970 protests in Poland erupted, Mazowiecki pursued the issue of organizing a committee to investigate who was responsible for the bloodshed.  The protests were sparked by the spiraling increase in the price of food and other necessities. About 42 people were gunned down and more than 1,000 wounded by members of the Polish People's Army and Citizen's Militia.  By 1976, Mazowiecki had been expelled from the Sejm, and forbidden to run for parliamentary office.  Nevertheless, he wasted no time and joined the opposition.

In August 1980, Mazowiecki led the Board of Experts which provided support to the workers from Gdansk in their negotiations with the authorities.  He joined the workers at Gdansk Shipyard to demand that Anna Walentynowicz be re-instated after having been fired.  They demonstrated for better pay, as well as demanding a monument be erected to commemorate the workers who were killed in the 1970 protest.  Within days, the momentum led to the birth of Solidarity - the first free trade union in Eastern Europe, and a freedom movement led by Lech Walesa. Mazowiecki was one of Walesa's most valued advisors and he counseled Walesa throughout the development of Solidarnosc from its inception to the emergence of a free and independent Poland.

The following year, he was Editor-in-Chief of the "Solidarity" weekly periodical (Tygodnik Solidarnosc). After the declaration of martial law, he was arrested and imprisoned in various locations and finally released on December 23, 1982.


In 1987, Mazowiecki travelled abroad, meeting with politicians and trade union representatives.  He was firmly committed to the process of negotiation as a means to wresting power from the ruling communist party, and actively participated in the famous Polish Round Table Talks.  It was his involvement in this process of negotiation that has made Mazowiecki one of the most important architects of liberalization of Polish politics, and led to the historic landslide victory of Solidarity in the partially free elections on June 4, 1989.

In September of 1989, Mazowiecki addressed Parliament to introduce his new cabinet and government.  Parliament voted in favor 402 - 0 with 13 abstentions.  Mazowiecki succeeded in delivering his promises for wide-spread governmental reform - and in short time.  The political system was thoroughly transformed and included a range of civil rights and freedoms as well as the establishment of the multi-party system. Not the least was the change of Poland's emblem, and name - from the People's Republic of Poland, to the Republic of Poland!  On December 29, 1989, the Polish Constitution underwent complete and radical reform and democratization, whereby the political and economic system of government in Poland were re-structured.  It was a shock treatment which transformed the communist economy, based on state ownership and central planning, to that of a capitalist market economy.


"We draw a thick line on what has happened in the past. We will answer for only what we have done to help Poland to rescue her from this crisis from now on". 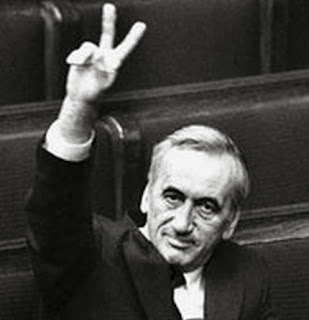 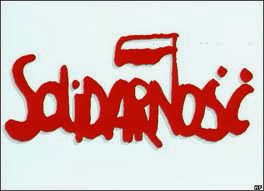 Posted by Polish Greatness Blog at 11:00 AM No comments: