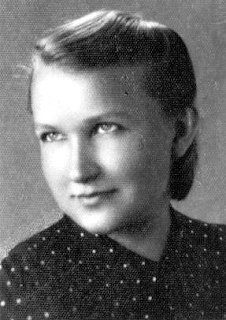 and a freedom fighter during World War II.

She was a Brigadier General of the Polish Army (the second and last woman in the history of the Polish Army to hold this rank), promoted by President Lech Kaczyński on May 3, 2006. Zawacka was the only woman among the Cichociemni, she served as a courier for the Home Army, transporting letters and other secret documents from Nazi-occupied Poland to the Polish government in exile and back again. Her regular route ran from Warsaw through Berlin and Sweden to London. She was also responsible for organizing the routes for other couriers of the Home Army.

Zawacka was born in Thorn (Toruń), East Prussia and graduated from University of Poznań with a major in mathematics. In the late 1930s she worked as a teacher at several high schools, and at the same time worked as an instructor for the paramilitary organization Przysposobienie Wojskowe Kobiet (Female Military Training).

During the Polish September Campaign

, she was the commandant of the Silesian District of Przysposobienie Wojskowe Kobiet and fought in the Defence of Lwów.  In October 1939 she joined the Silesian branch of Zwiazek Walki Zbrojnej using the code name "Zelma", which she later changed to "Zo".

In late 1940 she was moved to Warsaw and began her missions as a courier.  She was also a deputy of Zagroda—the Department of Foreign Communication of the Home Army. In February 1943 she traveled across Germany, France and Spain to Gibraltar, where she was transported by air to London. In Great Britain she underwent parachute training, and on 10 September 1943, dropped into Poland, as the only woman in the history of the Cichociemni.

Zawacka fought in the Warsaw Uprising

in 1944, and after its collapse relocated to Kraków, where she continued her underground activities. In 1945 she joined the anti-Communist organization Freedom and Independence (WiN), but resigned soon afterwards and took up a teaching job.

In 1951 she was arrested and tortured by the infamous Urzad Bezpieczenstwa (Security Service of the Ministry of Internal Affairs). She was sentenced to 10 years in prison for treason and espionage, but her sentence was shortened and she was released in 1955.

After her release from prison, she earned a doctorate degree from Gdansk University and was a tenured professor at the Institute of Pedagogy at Mikolaj Kopernik University in Torun where she established the department of Andragogy. She retired from teaching in 1978 after Slu«ba Bezpieczenstwa closed the department. She was an active member of the World Union of Home Army

Soldiers and cooperated with Solidarnosc

Order of the White Eagle

Posted by Polish Greatness Blog at 12:12 AM