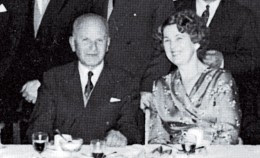 Halina was recruited by the Allied secret intelligence services through a network of Polish officers in Bern, Switzerland, who made contact with the British. Szymanska's mission was to provide a conduit of information between the Allies and Admiral Wilhelm Canaris

, chief of the German Abwehr.

In autumn 1939 Canaris helped her and her children move from occupied Poland to Switzerland. In return he was compensated with a contact within British Secret Intelligence Service

.  Szymanska, a British agent made contact with Canaris on several occasions in Switzerland and Italy. Then she met with his courier, Hans Bernd Gisevius. Szymanska role as an intermediary was an important one, in maintaining secret communication between the Allies and the Schwarze Kapelle

Szymanska had three daughters with Col. Antoni Szymański — Hanka, Ewa and Marysia. They spent the war in Switzerland, where Halina continued her work for MI6 and then later for the French Deuxieme Reseau, where she conducted courier work into occupied France. She was decorated by the French for her contributions.

In addition she also developed a working relationship with the American Allen Dulles, who was the head of the American OSS intelligence

Dulles was very supportive of Szymanska, in particular, when her daughter Hanka became ill and died in Switzerland. Her daughter Ewa resided in North Carolina and married to Andrew Milewski, who also has a highly honorable war record of fighting with the Allies. Marysia remained in England with her father Col. Antoni Szymański, and with Szymanska,with whom she was very close. She attended boarding school in England, coincidently called Poles, then married Mirek Malewski (another Polish officer who was honoured with distinction). They had two children, Anouchka and Michael.

(with the section of his book, MI6: British Secret Intelligence Service Operations

, 1909-45. The story dealt with his grandmother Szymanska and among other documents featured in the book, is also Halina's French identity card which was forged by Mr. Adams, a printing expert with MI6. The document enabled Halina to travel to occupied France for secret meetings with Admiral Canaris, gather information, and then report back to the Allies in Switzerland.

The book also includes a photo of Szymanska's diplomatic passport stamped with numerous entry and exit visas, two of which relate to her rendezvous with Admiral Canaris in Italy, April 1941. It was at such time that he disclosed details of Hitler's imminent attack on the Soviet Union.

After World War II, Halina Szymanska married General Kazimierz Wisniowski, who held the position of Chief of Staff to General Wladysław Anders, commander of the Second Polish Corps at the Battle of Cassino in 1944. After the war, she settled in Ealing, a suburb of London. She lies buried with her second husband in South Ealing Cemetery.

Posted by Polish Greatness Blog at 12:59 AM