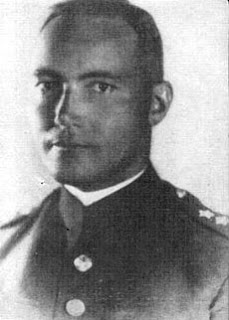 
Lieutenant Colonel Jan Wlodarkiewicz was a Polish solider, and officer of the Polish Army. He operated under the code names Damian, Darwicz and Odważny and was a freedom fighter during World War II.

He is notable as the first commander of the Wachlarz, the first secret service formed by an underground resistance

organization in occupied Europe. Jan Wlodarkiewicz was born May 28, 1900 in Warsaw. He graduated from the prestigious Stanislaw Staszic gymnasium in Warsaw and in his youth participated in several anti-tsarist youth organizations.

After World War II broke out, he joined the clandestine Polish Military Organization and received basic military training.  Since 1918, Wlodarkiewicz  had fought in defense of Poland.

Having enlisted in the Nieswiez-based Polish 27th Uhlans Regiment in 1929 he was assigned to the staff of the 9th Independent Cavalry brigade in Baranowicze. A year later, after his successful service there he was assigned to the Centre for Cavalry Training in Grudziadz. In 1935 he was promoted to rotmistrz (captain of cavalry). Up until the outbreak of World War II he served in the Polish General Staff as an officer officially responsible for the training of reserve Polish cavalry

units. At the same time, he served in the Special Command entitled with organization of partisan warfare, diversion and railroad sabotage of the 2nd Department of the Polish General Staff.


During the Polish Defensive War of 1939 he was ordered to supervise the creation of various reserve cavalry units in the Cavalry Reserve Centre in Garwolin. On September 15 he formed a cavalry squadron comprised of marauders and left-overs from various units. Together with this unit, he joined the Polish 41st Infantry Division and fought in the ranks of the Lublin Army.

For exceptional leadership and merits he was promoted to major and was able to survive the defeat together with his unit. After the Polish were defeated in the battle of Kock his objective initially was to break through besieged Warsaw and then, after its fall, make his way to Hungary or Romania. However, the joint Soviet-German invasion made it impossible to even get close to the border.  Ten days after the last Polish unit capitulated to the Germans, on October 15,  he disbanded the unit under his command in the village of Mrozy.

Wlodarkiewicz and most of his soldiers hid their weapons and broke through to Warsaw. It was there in November 1939 that Wlodarkiewicz met his wartime companion and deputy, Witold Pilecki

. They combined forces and founded the Secret Polish Army, which was one of the first resistance movements in nazi-occupied Poland and Europe.

In 1940 the organization merged with other resistance groups to form the Confederation of the Nation.
over which Wlodarkiewicz took military command. That summer he met with Stefan Rowecki

, the commander of Zwiazek Walki Zbrojnej (ZWZ), the predecessor of Armia Krajowa

. Together they formed the Wachlarz, a separate organization whose mission was sabotage and intelligence of Nazi operations. Wlodarkiewicz was appointed commander of the organization and in September 1941, joined the ZWZ.  In March 1942 he left for Lwów, where he planned to visit the local network of the 1st Sector of the Wachlarz. However, shortly after his arrival, on March 19, 1942 he died in unknown circumstances.

Posted by Polish Greatness Blog at 1:03 AM