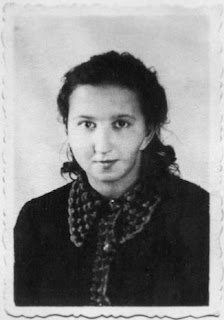 Danuta Siedzikowna (September 3, 1928 - August 28,1946) was a medical orderly in the 4th Squadron (created in the Białystok area) of the 5th Wilno Brigade of the Polish Home Army

. In 1946 she served with the Brigade's 1st Squadron in Poland's Pomorze (Pomerania) region.

Siedzikówna was born in the village of Olchówka/Guszczewina, near Narewka, in the Bielsk Podlaski district. Her father, Wacław Siedzik was a forester who was deported to Siberia by the Tsar's regime for having participated in pro-Polish independence organizations. He returned to Poland in 1923. In 1940 he was arrested by the NKVD

and again deported to Russia.


A year later he enlisted in Wladyslaw Anders

' Polish Army, but died in Teheran in 1942). Danuta's mother, Eugenia, née Tyminskia Prus III was a member of the
Home Army and was murdered by the Gestapo in September 1943. Danuta Siedzikówna and her siblings, Wiesława (1927 - 2004) and Irena (1931? - 1978) grew up together in the forester's lodge near Olchowka. They attended grammar school in Narewka until 1939. When World War II broke out until 1943 all three sisters studied in the Salesian Sisters School in Rozanystok near Dabrowa Bialostocka.

Danuta and her sister Wieslawa joined the Home Army in late 1943 or early 1944 where she acquired medical skills.. After the Soviets took Białystok from the Nazis, she began work as a clerk in the forest inspectorate in Hajnówka.

In June 1945, she was arrested along with the other employees of the inspectorate, by NKWD and UB and charged with collaborating with the anticommunist underground. She was rescued from a prison transport convoy by a patrol of a Wilno division of ex-Home Army partisans under the command of Stanisław Wolonciej "Konus" ( a subordinate of Zygmunt Szendzielarz, "Lupaszko") who were operating in the area. "Konus" escorted the freed prisoners to "Lupaszko"'s camp where several of them including Danuta joined his group. Subsequently Siedzikowna served as a medical orderly in the "Konus" troop, as well as in the squadron of lieutenant Jan Mazur, "Piast", and that of lieutenant Marian Płuciński, "Mscisalaw". For a brief period of time her superior was also lieutenant Leon Beynar "Nowina", deputy of "Lupaszko", later known as "Pawel Jasienica" - a notable Polish historian and writer. During this time Danuta took the pseudonym "Inka".

When the "Lupaszko" brigade was dissolved in September 1945 Danuta returned to work in the forest inspectorate in Milomlyn in Ostróda County using the underground name of "Danuta Obuchowicz" but the brigade was re-mobilized in response to Communist repressions in January 1946. In the early spring of 1946 Danuta came into contact with second lieutenant Zdzisław Badocha "Zelazny", the commander of one of Lupaszko's squadrons. After "Zelazny's death, the new commander, second lieutenant Olgierd Christa "Leszek", issued orders to Danuta to travel to Gdansk in order to collect medical supplies but she was again arrested by the UB on July 20, 1946 in Gdansk. In prison she was brutally beaten and tortured but refused to reveal any information about her contacts in the anti-communist underground nor their meeting points.

Though her duties were that of a nurse, she was nevertheless charged with taking an active, violent part in an attack on functionaries of the UB and the Milicja Obywatelska near village Podjazy as part of the Lupaszko unit. She was also accused of shooting the policemen and even issuing orders to other partisans. However, the testimony submitted by members of the  MO and UB were contradictory: some claimed to have seen her shooting and giving orders, while others denied the allegation. One of them, Mieczysław Mazur even testified that Danuta gave him first aid after he was wounded by other partisans. She was also charged with killing wounded policemen, which was also contradicted during her trial. Because of the conflicting testimony and the absurdity of the charges even the Stalinist court decided that she did not take a direct part in the attack.

Regardless of their conclusions, and ignoring Danuta's young age (she was only seventeen at the time), the court still sentenced her to death. The president of People's Republic of Poland, Boleslaw Bierut refused to grant her clemency. Though the request was submitted by Danuta's public defender she had refused to sign it. Danuta Siedzikówna was executed in a Gdansk prison on August 28, 1946, just six days before her 18th birthday along with Feliks Selmanowicz "Zagonczyk".

According to Marian Prusak, the priest who was summoned to give last rites to Inka and Zagonczyk, both prisoners were calm before their execution. After having received the Sacrament of Penance, Inka asked Prusak to inform her family of her death and gave him their address. They were led away to the basement of the prison and tied to wooden stakes but they both refused blindfolds. When the prosecutor gave the order for the execution squad to fire, they both shouted "Long Live Poland!" simultaneously. Danuta was still alive but according to accounts given the firing squad refused to obey orders to fire again, whereby the prosecutor, Franciszek Sawicki dealt the fatal blow.

Marian Prusak never delivered the message of Danuta's death to her family. Apparently they had already found out through other sources.. Unbeknownst to Prusak his every move was being watched by the UB and finally in 1949 he was arrested and charged with "espionage" for revealing the information. He spent three and a half years in prison.

After the fall of communism in Poland, the main Stalinist prosecutor in Danuta's trial who demanded the death penalty, Wacław Krzyzanowski, was brought up on two charges of judicial murder - in 1993 and 2001. However, both times he was declared innocent of the charges (Krzyzanowski argued that he was only marginally involved with the case).

In January 2007, a movie about Danuta Siedzikowna last days, "Inka 1946. Ja jedna zgine", was released by Polish network Teleplay. It was produced by Natalia Korynckia-Gruz, and featured actress Karolina Kominek-Skuratowicz in the title role


Editors Note:  FYI:  The image of  the medal posted here may or may not be the exact version which was awarded to the recipient.  There are several classes for each medal depending on various factors such as type of military (or civilian) service, rank of officer (or soldier), class of award, year in which it was awarded, etc   The lack of sufficient information on the web (or omission) has compounded the difficulty in selecting the correct class of medal. I apologize for any inaccuracies.

Posted by Polish Greatness Blog at 1:07 AM