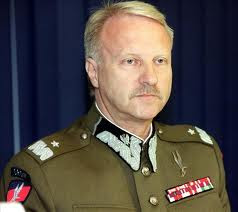 General Slawomir Petelicki's body was shot dead in a Warsaw suburb on Saturday, June 16, 2012. He was an iconic figure who was respected and admired by people the world over. General Petelicki had a long and illustrious career during Poland's communist, and post-communist eras, specializing in intelligence services. He was the founder of the famous GROM (Grupa Reagowania Operacyjno-Manewrowego), the acronym meaning, Operational Mobile Reaction Group. GROM is the Polish equivalent of the U.S. Navy Seals, and British SAS, and ranks among the worlds top elite special forces. GROM served in special missions in Iraq and Afghanistan.

Petelicki was found dead Saturday afternoon lying in a pool of his blood, killed by a single gunshot wound to the head - the gun found at the scene. The body was discovered by his wife in the underground parking lot of their apartment building. Preliminary examinations indicate that there were no other injuries to the body and that the bullet had entered the side of the head. Police are handling this as a suicide and are not considering foul play.


The nation of Poland is in shock at the news of his tragic death. Some authorities conclude that Petelick's death was a suicide. Jacek Cichocki, the interior minister stated that it could not be anything but suicide, however close friends and colleagues of the General have expressed skepticism. They claim that Petelicki did not appear to be depressed, and that he was not the kind of person to contemplate such an act. Moreover, he had no health problems. Polish politician, and close friend, Marek Siwiec, emphatically stated that "suicide doesn't quite fit." Prime Minister Leszek Miller supported this view that "men like [Petelecki] don't commit suicide." In the meantime, the body has been transported to a forensic laboratory for autopsy analysis. Definitive results are to be expected in several weeks.

Prosecutors have requested an interview with Jaroslaw Kaczynski, leader of the Law and Justice party, who is purported to have some information related to the General's death. He had stated candidly that "a few weeks ago I had a conversation with a well known figure in public life who told me that there are a number of people at risk because of what they know about how it was in Poland 20 years ago and at the start of the transition. Among them was Mr. Petelicki.” and that the allegation of suicide "should be treated with scepticism." Just days after Petelicki's death, the former defence minister, Romuald Szeremietiew made an announcement to the press that he received death threats from an "influential group" a year ago, but kept quiet about it until now. Szeremietiew added that he is "healthy" and has "no personal problems or ones of a financial nature, and therefore does not intend to commit suicide."

These are very disturbing words indeed, which confirms that there exists sinister elements conniving to maintain secrecy of its operations, past and present. But given the omnipotent power of this mysterious "influential group" to intimidate elected government officials, and allegedly commit murder to fulfill their aims, what chance is there that the truth will ever reach the light of day?

Poland has lost Slawomir Petelicki, a great son and patriot to his country, and the world.  He was a symbol of strength and courage. He is gone but the name Slawomir Petelicki will live on forever, as will his legacy.
Bóg, Honor, Ojczyzna.