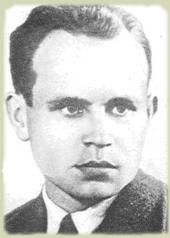 
Antoni Kocjan (August 12, 1902– August 13, 1944), was a renowned Polish glider constructor and contributed to intelligence services of the Polish Home Army

Antoni was the son of Michal Kocjan and Franciszka Zurawska, born in the village of Skalskie near Olkusz. He completed the Gymnasium of Casimir III in Olkusz in 1923 and enlisted in the army during the Polish-Soviet war

Following the end of the war, he studied at the Warsaw University of Technology in the Department of Electrical Engineering and Aviation and at the Warsaw Agricultural University. During his studies he collaborated with plane constructors of group RWD

Kocjann finished a pilot's course in 1929, and a year later won the second award at the Young Pilot's Championship. Later he was part of the crew of the RWD-2 and RWD-7 airplanes which surpassed the world's height record.


In 1931 he obtained an engineer's degree and began working at the Experimental Aviation Workshops in Warsaw and constructed his first plane "Czajka", a trainer glider that was later put into serialized production in several designs.

Field in Warsaw in 1932. and designed the training glider "Wrona" and a year later, the training-sport glider "Komar". These three successful gliders and their improved versions, "Czajka-bis", "Wrona-bis" and "Komar-bis", became mass produced in Poland and in lesser quantities under license abroad in Estonia, Finland, Yugoslavia, Bulgaria, and Palestine.

In the years 1948-1949, "Orlik 2"  was piloted by the American Paul McCready during which he set the world's height record for gliders at 9,600 meters. In 1937 Kocjan also designed the motor glider "Bak" of which only ten units were built. The production of "Komar" was also renewed after the war.

In the first days of World War II, Kocjan was wounded by bomb shrapnel. After the defeat of Poland in 1939, he enlisted in the underground army, ZWZ which later transformed into the Home Army

. On September 19, 1940, he was captured and arrested during a street raid and sent to the Auschwitz concentration camp. However, after ten months he was released.

Antoni Kocjan possessed great daring in his participation in the Polish Resistance, particularly in connection to the underground production of weapons and planning actions. He made a significant contribution in identfiying Peenemunde

as the testing site of the German V-1

and V-2 Rockets and succeeded in working out the technical structure of one of their rockets.

On June 2, 1944 he was arrested together with his wife and imprisoned in the Pawiak

prison. He was murdered by the Gestapo on the 13th of August along with the last forty prisoners of Pawiak during the Warsaw Uprising

source: Wikipedia
Posted by Polish Greatness Blog at 1:13 AM