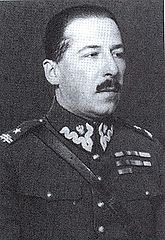 (October 1892 – 31 October 1965) was a Polish cryptologist, intelligence officer, engineer, journalist, and military commander. He was the founder and first Head of the Polish Cipher Bureau. operating with a large staff of cryptologists whom he recruited. They successfuly broke Soviet military codes and ciphers during the Polish-Soviet War which were vital to Poland winning the 1920 Battle of Warsaw.

Jan Kowalewski was born in Lodz, Congress Poland, during the rule of the Russian Empire. Between 1909 and 1913, after having graduated from a local trade school he studied at the University of Liège in Belgium, where he graduated from the faculty of chemistry.

When he returned to Poland in 1913 only to be mobilized for the Russian Army. World War I broke out the following year.  He fought on the Belarusian and Romanian fronts as an officer of the Engineering and Signal Corps. In December 1918 he was given permission to join the Polish unit  which was formed of Poles in Russia, and under command of Gen. Lucjan Zeligowski.  He held the position of Chief of Intelligence of the Polish 4th Rifle Division

, and crossed the Romanian border with his Division reaching Poland by May 1919.

Kowalewski was a polyglot and amateur cryptologist

. Initially attached to the staff of General Jozef Haller, he fought in Volhynia and Eastern Lesser Poland during the Polish-Ukrainian War for the city of Lwów. During his service he succeeded in breaking codes and ciphers of the army of the West Ukrainian People's Republic and General Anton Denikin's White Russian forces. Apparently his discovery was purely accidental, and the result of boredom. He would spent the entire night intercepting radio messages and discarding the encrypted ones. It caused quite a sensation among the staff.

Subsequently he was transferred to Warsaw and assumed the post of Chief of the Polish General Staff's radio-intelligence department. By early September he had selected a group of mathematicians from Warsaw University and Lwów University. Stanisław Lesniewski, Stefan Mazurkiewicz and Waclaw Sierpinski, who were also able to break Russian ciphers. Kowalewski's contribution to Polish victory in the Polish-Soviet War remained a secret for over 70 years. He was posthumously awarded Poland's highest military decoration, the Virtuti Militari.

After the war ended, he was appointed commander of intelligence to the staff of the Third Silesian Uprising. In 1923 he was sent to Tokyo, where he organized a course for Japanese officers in radio intelligence. He received the Order of the Rising Sun - the highest military award in Japan in recognition of his great service.

He graduated from the École Supérieure de Guerre in Paris in 1928  and was promoted to the rank of Major. Although he was no longer directly involved in radio intelligence he retained his rank as a Polish intelligence officer. From 1929 to 1933 he served as a military attaché at the Polish embassy in Moscow but was declared persona non grata and transferred to a similar post in the embassy in Bucharest, where he remained until 1937. When he returned to Poland he served briefly as head of one of the branches of the Obóz Zjednoczenia Narodowego political organization. He also became director of TISSA,  a Polish intelligence-sponsored company which imported rare materials for the Polish arms industry. He was also promoted to Lieutenant Colonel.

After the invasion of Poland in 1939, he was evacuated to Romania, where he headed a committee of relief for Polish war refugees. In January 1940 he relocated to France where he enlisted in the Polish Army in exile and became a proponent of an Allied offensive in the Balkans but the plan was made mott by the subsequent German spring offensive and the fall of France. Kowalewski had to flee German-occupied France and Spain to reach Portugal, where he formed yet another committee of relief for war refugees.

Kowaleski was Initially based at Figueira da Foz but soon relocated to Lisbon, a center of espionage and battleground for spies of all countries involved in World War II. There he contacted a friend, Jean Pangal, who was  a Romanian centrist politician and former Romanian envoy to Lisbon.  Pangal was
dismissed at the end of 1941 by Romanian leader Ion Antonescu because of his pro-Allied stance, Pangal remained in Lisbon and became a collaborator of Polish intelligence in Allied attempts to win over the Third Reich's allies - Hungary, Romania, Finland and Italy.

Collaboration with Pangal was vital to the Polish and Allied war effort. Kowalewski was able to convince General Wladyslaw Sikorski and Minister Stanislaw Kot to establish a center of Polish intelligence in Lisbon, realized on January 15, 1941. Officially it was named the Center for Contact with the Continent (Placówka Łączności z Kontynentem), headed by Kowalewski. It became the core of an extensive network of Polish resistance,  as well as sabotage and intelligence organizations throughout Nazi-occupied Europe.

The Center acted entirely independently, unlike similar groups in Poland which were directed by commanders operating from London or Warsaw. The Center coordinated the activities of dozens of groups operating in France, Belgium, the Netherlands, Greece, Italy, North Africa, Spain and even Germany. Moreover, it organized communications between the Polish Government in Exile

and occupied Europe, in addition to providing logistical and financial support for Polish resistance groups throughout Western Europe.

Kowalewski's intelligence network was invaluable to the British government and the SOE, to whom most of the reports were sent. The Lisbon center scored an extraordinary coup when it passed information concerning the exact date of Operation Barbarossa allowing the British government to know well in advance of the operation.

Kowalewski succeeded in neutralizing a secret German radio station which was communicating  with U-Boats operating in the Atlantic. He was of invaluable service to the former Romanian King Carol II, enabling him to escape from Romania and leave Spain for Lisbon.

Though Kowalewski had contacts with several politicians of Hungary, Romania and Italy willing to change sides, the situation changed after the Casablanca Conference of 1943, when the Allies demanded the unconditional surrender of the Axis.

The situation deteriorated further, after the Tehran Conference

when it became clear that Hungary and Romania would come under Soviet domination and that the plan for a second front in the Balkans which would allow the Hungarians and Romanians to break with the Nazi Germany was finally dismissed.  The Soviets demanded that Kowaleski be dismissed from his post in England. Frank Roberts, head of the Central Department of the British Foreign Office, informed General Colin Gubbins, head of the SOE

, that Kowalewski's network was not only aimed at the Germans, but allegedly posed a threat to Soviet interests by establishing a Polish-Hungarian-Romanian bloc.

On March 6, 1944 Sir Alexander Cadogan of the Foreign Office informed the Polish minister of foreign affairs Edward Raczyński that Kowalewski's contacts with the opposing powers could be regarded as treachery and recommeded Kowalewski;s dismissal.

Although no proof was provided, the Polish government was under pressure to submit to British directives and dismissed Kowalewski on March 20. The next month he was transported to London.

Kowalewski was then appointed Chief of the Polish Operations Bureau at the Special Forces Headquarters in which his task was the preparation of Polish resistance organizations in occupied Europe for the Operation Overlord. However, his post was mostly titular in nature, as any arrangements that Kowalewski could made would be futile.

After the war Kowalewski remained in exile in Great Britain and worked as a journalist until 1955 after which he became the editor-in-chief of an Eastern Europe and Soviet Russia monthly.  In 1958 and 1959 he was also a tutor at an unofficial military school for the Polish diaspora and he briefly collaborated with Radio Free Europe and other Polish exile organizations.

In the latter part of his years, in 1963, he briefly returned to cryptanalysis and managed to break the codes used by Romuald Traugutt during the January Uprising.

Suggested Links:
The Enigma
Posted by Polish Greatness Blog at 4:32 AM