Forgotten Heroes of the Warsaw Ghetto Uprising - A Memorial

Today marks the 68th anniversary of the Warsaw Ghetto Uprising. The final Jewish action took place on April 19th, 1943 on the eve of Passover. In a desperate attempt to prevent the Nazis from making further deportations of Jews to the death camps, young Jewish resistance fighters in the Warsaw Ghetto fought against overwhelming odds - to their death.

With few weapons the Jewish fighters were able to resist for 11 days, until German reinforcements were called in an effort to put an end to the Uprising. Over 2,000 SS and and German troops backed by Panzer and police units converged in the Warsaw Ghetto, and pummeled the Jewish resistance with the full force of Nazi firepower.

There were only 500 Jewish fighters from the ZOB, and approximately 250 from other Jewish fighting groups. The Jews were found to have had only 7 Polish rifles, 1 Russian rifle, 1 German rifle, 59 pistols, several hundred home-made grenades, several hundred incendiary explosives, and ammunition. Despite the formidable power of the Nazi arsenal, German troops could not quash the Jewish Uprising and after 2 days of vicious fighting, Stroop ordered that the Ghetto be burned to the ground. 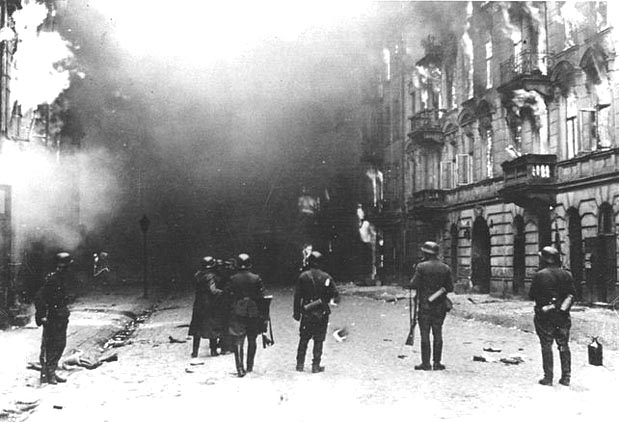 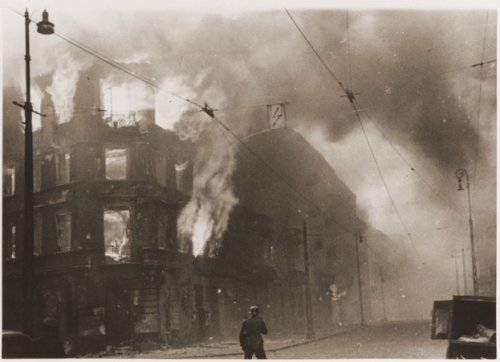 The Nazis systematically razed the Ghetto to the ground building by building, block by block, and rounded up or executed any Jew that they could capture. The Jewish resistance all but ceased on April 23rd and the Nazi operation officially ended in mid-May, culminating in the complete destruction of the Great Synagogue of Warsaw on May 16th.  More than 56,065 people were killed on the spot, according to Nazi reports, and most were deported to concentration camps and the death camp at Treblinka. 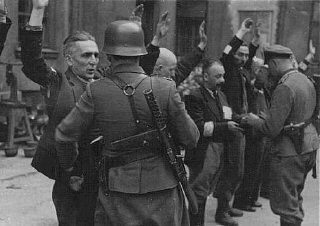 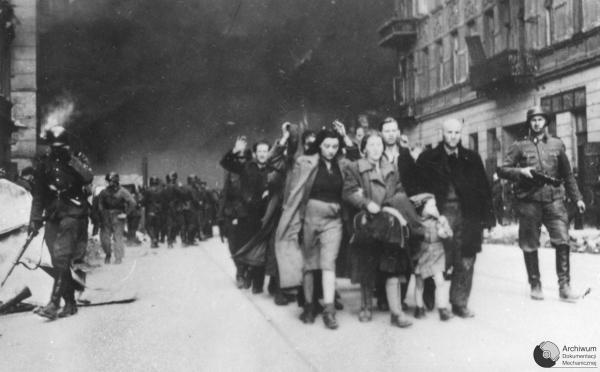 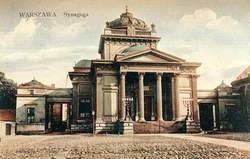 The Great Synagogue in Warsaw, circa 1910


In his report, Stroop described the battle:  "Over and over again new battle groups consisting of 20 to 30 or more Jewish fellows, 18 to 25 years of age, accompanied by a corresponding number of women kindled new resistance. These battle groups were under orders to put up armed resistance to the last and if necessary to escape arrest by committing suicide....During this armed resistance the women belonging to the battle groups were equipped the same as the men....Not infrequently, these women fired pistols with both hands, or hand grenades (Polish "pineapple" hand grenades), concealed in their bloomers up to the last moment to use against the men of the Waffen, SS, Police, or Wermacht....The resistance put up by the Jews and the bandits could be broken only by relentlessly using all our force and energy day and night...." 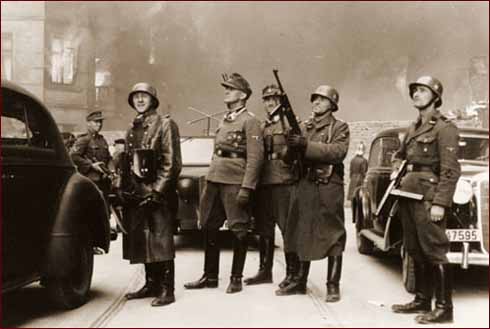 Stroop, observing the destruction of the Warsaw Ghetto 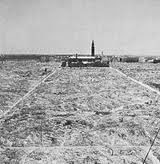 The Aftermath of the Destruction of Warsaw Ghetto


The Warsaw Ghetto was one of the largest ghettos in Poland during World War II. It was created on October 16, 1940, and located within the territory designated by the Nazi's as the "General Gouvernement". Governor-General Hans Frank was appointed this region in which he instituted the deportations and deaths of millions of Jews from Warsaw, and outlying districts. The total population of the Warsaw Ghetto quickly reached over 400,000 Jews, and comprised about 30% of the population of Warsaw. A month later the Ghetto was sealed by brick walls, topped with barbed wire, and armed guards deployed at all entrances. Any Jews caught while trying to escape were shot on the spot. Typhus and starvation took the lives of over a hundred thousand Jews, and many more were deported to labor camps and worked to death. Between July 23 and September 21, 1942 over 254,000 Jews were deported to Treblinka death camp and exterminated.

The Judenrat was appointed by the Nazis to deal with the daily administration of the Ghetto. Among the members were 24 Jews, headed by Adam Czerniakow. Their duties included was the selection of Jews for deportation to the "work camps". They passively complied with Nazi directives not knowing the true fate of their compatriots. When Czerniakow finally became aware of the purpose of these transports, he could not bear the fact that he had been complicit in the murder of his own people. He committed suicide in July 1942.

On July 28, 1942 a meeting took place in the Warsaw Ghetto among the divisions of the youth movements, Ha-Shomer, Ha-Za’ir, and Dror with the objective of forming a resistance to fight the Nazis. They were known as the Jewish Fighting Organization; in Yiddish - the YKA or Yidishe-Kamf-Organizatsie; in Polish it was called ZOB: Zydowska Organizacja Bojowa. The members signed proclamations, written in Polish. Command leaders consisted of Bresler, Cukierman, Zivia Lubetkin, Mordecai Tenenbaum and Josef Kaplan. They organized a delegation of young Jewish members, which included Tosia Altman, Plotnicka, Leah Perlstein, and Arie Jrek Wilner, to be sent to the Aryan side (that is, outside the ghetto), with the mission of contacting the Polish underground for assistance, and for the procurement of weapons.When the ZOB was created, the only weapon in the ghetto at the time was merely one pistol. Among various other splinter Jewish fighting groups in the Warsaw Ghetto was the ZZW (Zydowski Zwlazek Wojskowy), the Jewish Military Union. Over the following two years this group formed cells throughout Poland including Lwow, Lublin and Stanislawow.

The ZOB took their first action against the Nazis on January 18, 1943 when the Germans entered the Ghetto to set up another deportation. The ZZW also fought, using weapons supplied to them from the Safety Corpus of the Polish Home Army. The weapons consisted of 3 heavy machine guns, 15 automatic guns, 750 grenades, 7 rifles, and 100 handguns. At the start of the Jewish Uprising, an additional cache of weapons were obtained which included 4 machine guns, 1 light machine gun, 11 automatic guns, 50 handguns, and 300 grenades. When the Germans entered the Warsaw Ghetto to round up more Jews for "deportation" they were surprised by the attack and retreated. The Jews were a force to contend with.

The ZOB also had some support from the Polish resistance, having received a number of munitions. A few Polish resistance fighters from the AK even entered the ghetto and joined their Jewish compatriots in the battle against the Nazis. Initially, the Jewish resistance was successful because the Germans had stopped deportations after four days. The Jews had taken control of the Ghetto, built bunkers and fighting posts and battled against the Jewish collaborators, including the Jewish Ghetto Police.

HEROES OF THE WARSAW GHETTO UPRISING 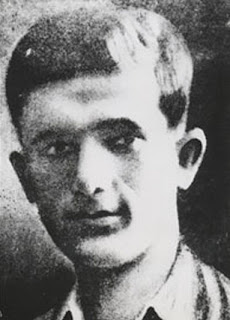 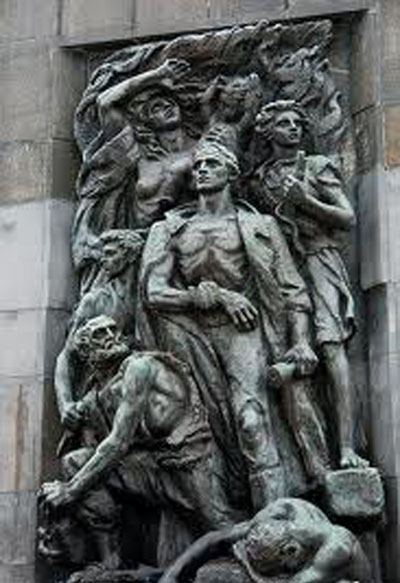 Posted by Polish Greatness Blog at 12:33 AM