Propaganda is one of those terms which we all understand but fail to define adequately. Most people would describe propaganda as the deceptive manipulation of information used to influence public opinion and attitudes, however the same can also be said of commercial advertising, marketing and public relations. The Oxford Dictionary defines propaganda as "information, especially of a biased or misleading nature, used to promote a political cause or point of view". While accurate it oversimplifies a subject that is far more complex than we realize.

Even the experts cannot agree amongst themselves. David Welch, Director of the Center for the Study of Propaganda and War (University of Kent, United Kingdom) defined propaganda as a tactic by which belligerents deal with each other in a war of ideas. The Cold War was a continuation of these ideological battles as opposed to the "hot war" that was the conflagration of WWII.

Elizabeth Drew, a distinguished American journalist and author explained that "Propaganda has a bad name, but its root meaning is simply to disseminate through a medium, and all writing therefore is propaganda for something. It's a seeding of the self in the consciousness of others."

Luis Van Isschot, working on his post-doctoral thesis at City University of New York described propaganda as "the manipulation of public opinion to garner support for a particular movement" that makes "systematic use of information and disinformation to project and convince people of a certain point of view."

Margaret Peacock, Assistant Professor of History at the University of Alabama stated that "It's open for debate.  At its essence propaganda is about the selling of an idea, political ideology, economic systems or a way to view the universe....[and] has an impact in the way that people live their lives." 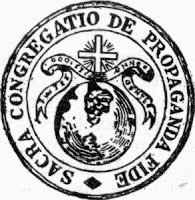 The etymology of propaganda has had a rather neutral and innocuous beginning. It is a derivative of the word "propagate" meaning to flourish and multiply, and possessed none of the negative connotations with which it is associated today. The word was first used by the Catholic Church in 1622 when Pope Gregory XV established the congregatio de propaganda fide, a congregation of cardinals whose mission it was to defend the faith (and the Pope's authority) from Protestants trying to undermine the Vatican. It might be of interest to know that the Congregatio now has a Facebook page.

Historians assert that the term propaganda first gained its notoriety during World War I when the British government began a furtive campaign to demonize Germany in the eyes of the world. It was the first time that Germans were described as destructive "barbarians" and "Huns".  (It was a British response to German propaganda activities already in operation at the time.)


The above image was a WWI propaganda poster depicting the execution of Edith Cavell
who was a British nurse working for the British Secret Intelligence Service. She risked her own life to save the lives of many British, French and Belgian soldiers during WWI and helped over 200 Allied soldiers escape from Nazi-occupied Belgium. Cavell was found out and arrested by the German authorities on August 3, 1915 and charged with harboring Allied soldiers. She was court-martialled, found guilty of treason and executed by a German firing squad on October 12, 1915. News of her execution received worldwide press, and instigated public outrage. The British War Propaganda Bureau used the tragic end of her life as fodder to produce the most virulent propaganda against the Germans. It was one of the most effective and successful propaganda campaigns of World War I.

In an effort to establish credibility, the British government manipulated the content of newspapers, books, pamphlets, film, and recruitment posters. But the most effective technique of all was the dissemination of details regarding the German atrocities committed during the Invasion of Belgium in 1914. The "Report of the Committee on Alleged German Outrages" (i.e.Bryce Report 1915) described the details of the systematic rape and murder of Belgian women and children and included the testimony of over 1,000 witnesses. The document, published by a committee of distinguished British lawyers and historians, made headlines around the world and was translated into thirty languages. Though the report contained factual information, many of the atrocities mentioned turned out to be fictitious. (It is noteworthy that many of the British propaganda tactics were utilized by Adolf Hitler during World War II.)

The practice of propaganda is as old as the history of warfare. Case in point is an ancient treatise, "The Art of War" written by Sun Tzu (544-496 BC) who was a famous Chinese military general. It is the oldest and most successful book ever written on the subject of military strategy and its sage advice has been sought after by great military leaders throughout the ages, including the likes of Mao Zedong and General Douglas MacArthur. Among the tactics described in its chapters, Sun Tzu advised that "supreme excellence" cannot be attained by physical battle but rather by "breaking the enemy's resistance without fighting". This is the very essence of war propaganda.


Great thinkers of the late nineteenth and early twentieth centuries were intrigued by the power of propaganda though the term was not yet part of the lexicon. Gustave Le Bon (1841-1931)was a French social psychologist and sociologist whose work on the subject of crowd psychology attracted the attention of researchers studying the effect of media on social groups. His book "The Crowd: A Study of the Popular Mind" (1896) was instrumental in the development of the field of group dynamics. Among his assertions was that, "It's easier to dominate a people by exciting their passions than by looking after their interests." This premise among others was plagerized by Hitler in his book "Mein Kampf". Even Mussolini was known to have kept a copy of Le Bon's book nearby. William Trotter (1872-1939), a famous British surgeon wrote his book "Instincts of the Herd in War and Peace" published just before the outbreak of World War I. Trotter was referred to as "Le Bon's popularizer in English" because of the strong similarity of his writings. The following photo taken of crowds in Nazi Germany in 1935, provides an example of one of Le Bon's theory regarding group behaviour. He wrote that "when it is wanted to stir up a crowd for a short space of time...it is necessary that the crowd should have been previously prepared by certain circumstances.." This preparation involved tactics aimed at inducing crowds to near levels of hysteria. (N.B. We employ these methods today usually at political rallies, talk shows, and rock concerts.)
.
Charles Darwin wrote in his book "The Descent of Man" (1871), that "it is worthy of remark that a belief constantly inculcated during the early years of life, whilst the brain is impressible, appears to acquire almost the nature of an instinct; and the very essence of an instinct is that it is followed independently of reason."  The large-scale brainwashing of young "impressible" minds in the Hitler Youth, and Italian fascist groups are prime examples of this.


The young boys in the photo were members of the Italian Balilla and Vanguards, a para-military fascist youth organization founded shortly after Italian dictator Benito Mussolini came to power in 1922. The group was named "Baililla" to honor the memory of a young Italian boy who lived in Genoa in 1746, then occupied by Austria. Balilla threw a rock at the Austrian artillery inciting a mob riot that spread throughout the city and succeeded in driving the Austrians out. These young "Baillas" did not carry weapons nor receive military training. But they were "inculcated" with fascist ideology, taught to march and were drilled in certain platoon maneuvers. During the period 1927-1928 there were over 250,000 young fellows "enlisted" in the corps. Once they reached the age of twenty there were conscripted into regular military service. 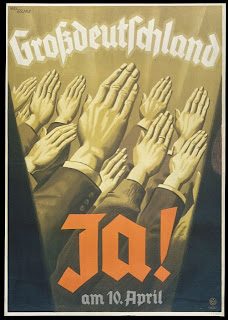 Joseph Conrad (an ethnic Pole whose real name was Jozef Teodor Konrad Korzeniowski) is regarded as one of the greatest "English" novelists of all time. In his book, "Lord Jim" (1900) Conrad expounded on the power of a single word - "He who wants to persuade should put his trust not in the right argument, but in the right word. The power of sound has always been greater than the power of sense."

The image of the poster to the right was a Nazi campaign message in 1938 urging German voters to vote "Ja" (yes).
It was effective not only for its graphic imagery but the use just one word and and appealed to "bandwagon" psychology of the masses.


Regardless of its messages or formats, the greatest power of propaganda is in its ability to transcend time and place. Sixty-seven years have passed since the end of WWII and much of Nazi propaganda continues to circulate today, though many people are oblivious to it.  In addition to media, there are propagandist slogans, racist and hate propaganda (including ethnic jokes) and stories fabricated by Nazi Germany which have been passed around by word of mouth.


The success of all propaganda relies with one basic tenet, and that is, "a lie told often enough becomes the truth." Leaders throughout history including Vladimir Lenin, Jozef Stalin, Adolf Hitler and George W. Bush have all attested to its effectiveness.