As we near the end of 2010, it is a time of reflection of all the things that transpired in our lives over the past year.  But more importantly to reflect upon the events in our nation and the world that shape our lives.  Initially my objective was to present a brief summary of a few of the major events that took place in Poland throughout the year.  But as my research progressed, I realized that this blog post can only be about one thing - the death of a President.

On April 10th, 2010, the President of Poland, Lech Kaczynski was killed in a horrible plane crash. The Soviet-built Tupolev 154, carrying the President and high ranking officials of the Polish government crashed in Smolensk, Russia. All 96 passengers aboard were killed including his wife Maria. Also among the dead - Ryszard Kaczorowski, Head of the Polish government in exile (in London) during the Communist occupation; Andrzej Kremer, Deputy Foreign Minister; General Franciszek Gagor, Chief of Staff; General Tadeusz Buk, Head of Land Forces in Poland;  Admiral Andrzej Karweta, Head of the Polish Navy; Andrew Blasik, Commander of the Polish Air Force; amid many government officials, Members of Parliament, Senators, dignitaries, and the governor of Poland's central bank, Slavomir Skrzypek. Complete List of Casualties 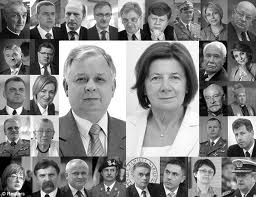 The President and his delegation were on their way to Smolensk to attend the 70th Anniversary commemorating the Katyn Massacre. (During April and May of 1940, the Soviet NKVD massacred over 16,000 Polish Officers by order of Stalin. All were systematically executed by a gunshot to the back of the head, and buried in mass graves in areas around Smolensk, Russia.  For decades the Russian government denied culpability and only in recent years have they admitted to the truth.)

The news of the crash has pierced the heart and soul of the Polish people.  A nation in mourning is also gripped by the uneasy suspicion that foul play could have been involved. That the plane crashed on Russian soil, and on the 70th Anniversary of the Katyn Massacre stirred painful memories for many Poles, as well as suspicion of Soviet conspiracy.

Soviet officials promised a full investigation of the plane crash and on December 17, 2010 delivered its findings in a 150 page draft report. It was lambasted by the Polish government as unacceptable due to errors, omissions, and contradictions, in addition to contravening the Chicago Convention of the rules of aviation investigation.  Moreover, there are suspicions that the Soviet authorities had tampered with the evidence by dismantling the plane wreckage into smaller pieces, apparently without the knowledge or consent of the Polish government. Warsaw prosecutors are investigating the situation. 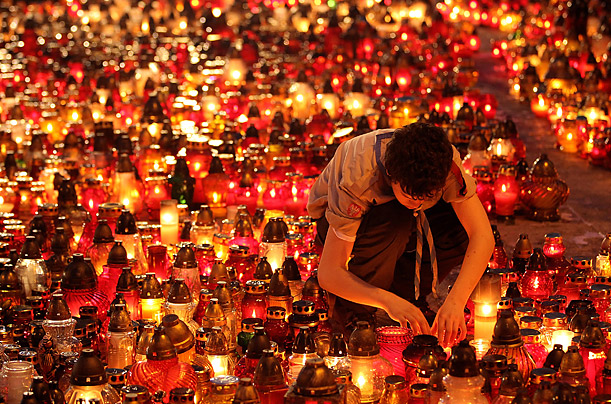 Most disturbing is that the coffin of President Lech Kaczynski does not contain his remains at all.  In a statement on December 20, 2010, Jaroslaw Kaczynski confided that he did not recognize the remains but was told by others that it was Lech Kaczynski. " But when I saw the body that was brought back in a coffin to Poland, that person did not look like my brother. I was told it was him."   Former Prime Minister Jaroslaw Kaczynski has yet to decide whether to order an exhumation. Moreover, an unidentified source indicated that Soviet autopsy reports were inaccurate and strewn with errors in more cases than one. In fact, the coffins were sent to Poland sealed shut and "no formal inspection" of them was carried out in Poland. While news reports assert that the crash was caused by bad weather and pilot error, one can never be certain. Especially when the Soviets are involved. To this day, controversy still has not relented concerning the mysterious plane crash on July 4, 1943 of Wladyslaw Sikorski, General of the Polish Armed Forces as well as Prime Minister of the Polish Government-in-exile in London. Then, as now, Soviet interference is suspected.

Poland has suffered a great shock. But the country is strong and so are it's people. The newly elected President, Bronislaw Komorowski, gave much optimism and hope for the future of Poland. In his inaugural address on August 6, 2010, he said that the swearing in of a Head of State " is a feast of Polish Statehood and Polish Democracy ", and that " the order which we have built over the past 20 years in Poland managed to maintain the continuity of power and to honour the memory of the victims with dignity."

Indeed. Poland has come a long way.  Its' strengths are in the ability to move forward, and in its vision for building a strong nation while never forgetting its past. It has long been committed to the ideals of democracy and freedom. In fact Poland's first constitution was adopted in 1791 on the very principles of the United States Constitution ratified just three years earlier.

Poland has had more than its share of tragedy throughout its long history.  It was partitioned a fourth time in September 1939 and its people subjected to genocide and slavery by occupying forces. Though the Allies won the war, Poland was betrayed and languished for almost 50 years under Soviet occupation and totalitarianism. But the spirit of the Polish people never wavered. Courage and faith endured and made freedom a reality.

The death of President Kaczynski and that of many other key members of Polish government is a terrible tragedy to their families and to the nation at large. Despite the enormous void left in their wake, Poland remains strong.  Whatever conclusions are arrived at concerning the crash, one thing is certain: the chain of power is not broken and is stronger than ever. Poland still rises to the top. It always has. That is the makings of a Great nation. Poland. God Bless You. 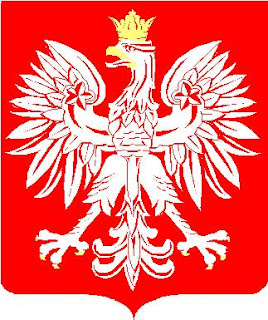