TRIBUTE TO JOHN WARD: HERO OF THE WARSAW UPRISING 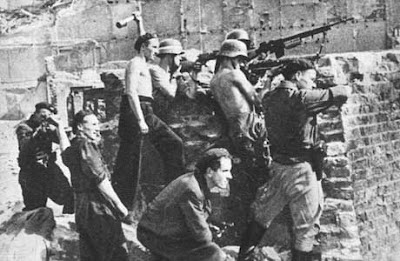 CLICK ON PHOTO TO HEAR BLYSKAWICA RADIO BROADCAST
(You will be redirected to www.polishgreatness.com)


These urgent pleas were broadcast on Radio Blyskawica during the maelstrom of the Warsaw Uprising. For sixty three days from August 1 to October 6, 1944, the Polish people valiantly fought against the Nazi Dragon in a desperate attempt to free their homeland - forgotten and abandoned by Britain and the United States.

The English voice of these broadcasts was that of John Ward, a British citizen who originated from Birmingham, a suburb of Ward End. He was only eighteen years of age when he enlisted in the RAF in 1937, and started as a wireless operator, rising the ranks to Flight Lieutenant. He survived after his plane was shot down by enemy fire in 1940, was captured and spent the better part of a year in a POW camp in Nazi-occupied Poland. In April 1941 he managed a daring escape and through the help of a Polish priest was put in touch with the Armia Krajowa.


From 1941 to 1945 John Ward was the communications liaison between the British government and the Armia Krajowa (Polish Home Army) and became war correspondent for the London Times. He joined the Polish Resistance just days after the Uprising broke out and was recruited by Stefan and Zofia Korbonski to prepare English dispatches that were transmitted to London via Morse Code. 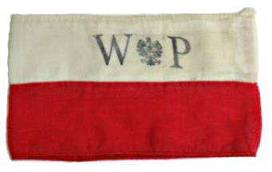 John Ward was involved in clandestine operations - transmitting English-language broadcasts from Radio Blyskawica (Radio Lightning). (For facts about the radio station, please see end of blog post.) According to Jan Nowak, Lieutenant Ward spoke Polish fluently, albeit with a thick accent. Nowak was quite impressed that Ward elected to wear the red and white armband of the Armia Krajowa, and a cap emblazoned with the Polish eagle. Ward proved himself to be as much a loyal Polish patriot as he was a British subject. He had great admiration and respect for the Polish people and was fiercely committed to his mission in helping the Polish Underground, making urgent appeals to Sir Archibald Sinclair and Colonel Perkins. John Ward was wounded in the leg during the Uprising, but within two days was already working back at his post. 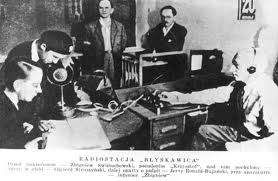 Despite John Ward's persistence, London authorities remained aloof as ever. Nevertheless he reported continuously on the daily events, submitting a total of sixty four reports providing descriptions of the Nazi siege on Warsaw, and the terrible toll upon the lives of Polish insurgents and civilians. According to Zofia Korbanska, there was a pervasive fear that messages from the Polish Underground were being dispatched "in vain" since British authorities were quite skeptical about the reliability of reports from Polish sources. But even John Wards' reports failed to make significant headway and were given the official brushoff. (Editors note:the so-called British skepticism had more to do with the exigencies of political pressures rather than outright disbelief in reports about the Warsaw Uprising. Tragically, Churchill and Roosevelts' loyalty was placed squarely with Moscow, and not with Warsaw.)

John Ward was an outspoken and fervent advocate on behalf of the Polish Resistance, and made constant demands for British military equipment, supplies, assistance and intervention. In a macabre chain of events, British and American help did finally come, but it was all too little and too late.

After 63 days of desperate battles, the Warsaw Uprising came to an end. On October 2, 1944, the Polish Home Army capitulated. John Ward received orders to return to England, but instead escaped Warsaw and made his way to the British embassy in Moscow, where he was subjected to a 12 hour interrogation by Soviet agents.

Polish losses were enormous. Casualties to Polish fighters were 10,000 KIA, about 6,000 MIA, 5,000 WIA, 15,000 POWs and over 200,000 Polish civilians had perished. The remaining civilian population of about 700,000 were rounded up and deported. Nazi bomb squads went to work razing Warsaw to the ground, building by building, block by block. By January 1945, when the Soviets army finally entered the city, Warsaw was nothing more than a spectre of itself - about 85% of the buildings were utterly destroyed.

In recognition of John Ward's heroism, the Polish government decorated him with the Polish Cross of Valour. He was one of a handful of British subjects who remained in Warsaw during the Uprising, but he was the only one known to have made such enormous efforts to help the cause for Polish freedom and liberty.

Sadly, very little is known about John Ward. He was a very private man and not inclined to disclose anything about his personal experiences and thoughts.  Even Korbonska could only speculate.  She believed that his determination to help the Polish Resistance had as much to do with personal as well as political motives. During his stay in Warsaw, John Ward was residing with a Polish family. a widow and her daughter, and two dogs which he absolutely adored.  The daughter was in love with him, and according to hearsay, they were to be married.

John Ward passed away on August 29, 1995.  After the war he never spoke about his experiences but his legacy will live on in hearts and minds of freedom-loving nations for all time.

POLAND IS A COUNTRY WHICH I, AS AN ENGLISHMAN,
AM PROUD TO CALL AN ALLY.
RAF Lieutenant John Ward

Blyskawica ("Lightning") was only one of a few Polish Underground radio stations operating during the Warsaw Uprising. (The other was named Burza "Storm".) The "Lightning"transmitter was built by Antoni Zebik (Biegly) and played its signal melody of the Warszawianka (The Song of Warsaw or Varsovienne) It was a revolutionary hymn originally composed in 1831 to support and encourage the Polish patriots during the November Uprising (1830-31). The lyrics (see end of blog) were written by Casimir Francois Delavigne and music by Karol Kurpinski.


Blyskawica was originally located in the PKO building - Pocztowa Kasa Oszczędności (Postal Savings Bank) on 9 Jasna Street, Warsaw. However as the Uprising continued, they had to move location several times in order to evade detection by Nazi reconnaissance planes. On August 25th, 1944 they moved the station to the "Adria" cafe on 10 Moniuszki Street. Then on September 4 relocated again to the former Soviet Embassy on 15 Poznanska Street, then to the Public Library on 26 Koszykowa Street. Blyskawica transmitted three or four times a day, and among its program included reports on the uprising, official notices of the AK, patriotic poems, and music. It broadcast messages in Polish, English, German, and French. They even sent an enthusiastic congratulatory message to the French Resistance on the event of their Liberation. Blyskawica was the only radio station of its kind in all of Nazi-occupied Europe!


During the Uprising Blyskawica Radio transmitted on the shortwave frequency of 32.8 and 52.1 meters and medium-wavelength of 224 or 251 meters. A replica of the transmitter was built after the war in minute detail even to the use of original dials. However by necessity it was adjusted to operate on a different waveband at 7.043 MHz. The reason was that the original meter bands used by the Armia Krajowa during the Uprising became the official waveband of NATO.


N.B. Click on this link "Warsaw Uprising 1944: Complete Index of Blog Posts August 1 to October 6, 2011" for a Special series on the Warsaw Uprising, day by day. Includes informative daily "news reports" on important events of the Uprising, including fascinating facts, archival photographs and videos.   Please note that each of Lieutenant John Wards dispatches have been integrated into this Special series and presents his eye-witness accounts of one of the greatest urban battles of modern warfare.