On August 1st 1944 the Polish Underground launched an Uprising in a desperate attempt to liberate Warsaw, and Poland from the Nazi occupiers.  For 63 days the Polish Home Army and Polish civilians fought against overwhelming odds, outnumbered and outgunned by the German wehrmacht.  Despite continuous promises of allied support, Britain and the US left the Poles to fight alone, abandoned and subsequently betrayed.

The Warsaw Uprising was a tragedy of epic proportions: 10,000 Polish insurgents were killed in action;  6,000 missing in action;  5,000 wounded in action;  200,000 Polish civilians killed;  700,000 Polish people were expelled from Warsaw and about 85% of the city was razed to the ground.    It was followed by yet another no less catastrophic event - the brutal occupation of Polish territory and suppression of its sovereignty and independence by the Soviet regime.  Former members of the Polish Home Army were arrested and subjected to mock trials, convicted and imprisoned. Many of them died under so-called "mysterious circumstances." 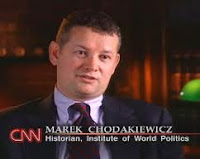 Marek Jan Chodakiewicz, a research professor of history at the Institute of World Politics, wrote in May 2004, an article entitled, The Warsaw Uprising 1944: Perceptions and Reality "..finally, we are at last free to study the tragedy and triumph of Warsaw in all its complexity.  Let us not be crippled by any censorship.  All is fair game. May perceptions be replaced with reality."

The disturbing reality is that Western perceptions of the Uprising are still tainted by anti-Polish propaganda and revisionism, which is aided and abetted by the media around the world.  With few exceptions, newspapers persistently print inaccurate articles that verge on libelous comments about Polish history of WW2.  Apparently few journalists today are concerned with investigative reporting, and prefer to take the easy route by relying on hearsay.  Truth continues to be a casualty.

There is a chasm between Western and Eastern perspectives: the West has already relegated WW2 to that of ancient history, dismissing it as irrelevant.  But the past is still very much alive in the hearts and minds of Eastern Europeans, particularly the Poles.  According to Piotr Wrobel, author of the book, "The Devil's Playground: Poland in World War II",  "the war is a vivid memory, the emotional wounds are still fresh".  Unlike many other European nations, Poland has been suffered from centuries of invasion, brutal occupation and repression, and the danger of annihilation at the hands of the German and the Soviet invaders.

One cannot discuss World War II without mentioning Poland, however there are countless number of Western publications that have virtually eliminated any reference to Poland.  Churchill set this precedent at the end of WW2.  He stated that "history will be kind to me for I intend to write it."  Indeed.  He published a ten-volume treatise about World War II history, in which hardly any mention was made about Poland.  It was only a matter of time before the truth would come out. But public reaction was not quite as expected.

In 1957, the Polish film "Kanal" directed by Andrzej Wajda was the recipient of the Special Jury Prize at the Cannes Film Festival.  The screenwriter of the film, Jerzy Stefan Stawinski was showered with praise for having come up with such a "magnificent story"!  Apparently, the press thought this was a fictional story.  Upon hearing about this, Wajda told him, "Listen,  tell these gentlemen that you didn't make this up, you lived through it."

A Polish public opinion research center CBOS (Centrum Badania Opinii Spolecznej) conducted a poll in July 2009, marking the 65th Anniversary of the Warsaw Uprising. They asked Polish citizens, "Do you consider the Warsaw Uprising important to you personally?"   The answer was a resounding yes.  Forty-one percent said that it was "Very Important", followed closely by 46% which said it was "Rather Important".  Only 8% claimed that it was "not very important", while 3% reported that it was "not at all important".  There does not seem to be an equivalent poll from Western sources, but it is safe to say that the Western mentality continues to be mired in apathy.

There are many lessons to be learned by studying the history of the Warsaw Uprising. It is surprising that even among people who are very intelligent and well educated, there is a lack of sufficient understanding and knowledge.  This refusal to face the past seems almost tantamount to self-censorship.  What would our forefathers say?