Animals have figured prominently as instruments of warfare dating as far back as 2,500 B.C. Proof of this can be seen in ancient Sumerian art illustrating war scenes in which teams of horses appear to be pulling wagons. By 1,600 B.C. and with the development of harnesses and bridles, chariot warfare became common in the Ancient East, a region which today is the Middle East. During the Second Punic War in 218 B.C, Hannibal used elephants which had been trained to serve as mounts and to transport heavy equipment. These animals were highly valued, and were even used by Japanese and Allied troops during WW2.

Throughout history there has been a virtual menagerie of animals used either as auxiliary military units, or sacrificed as a sort of "weapons delivery system". During WW2 the Russians used dogs strapped with explosives to attack enemy troops. The United States even tested "Bat Bombs", that is, little bats strapped with tiny incendiary devices which were rigged to explode at a given time. The idea was actually tested in the U.S. but was deemed unfeasible and therefore scrapped. Many animal species have been an integral part of military battles throughout the ages, and most of them were considered dispensable, with the exception of horses of course.

No doubt there have been more than a few famous horses who became war heroes, most notably Sergeant Reckless, a Mongolian mare, who served with the United States Marine Corps during the Korean War. A special edition of Life Magazine in 1997, featured her name among the top 100 American heroes of all time, among the likes of George Washington, Thomas Jefferson, Abraham Lincoln, and Martin Luther King, to name a few.

But the most famous of all warrior animals is one which served during World War II - a Syrian brown bear who became a hero and international celebrity. He was adopted by the 2nd Polish Corps when he was just a cub, and was given the name Wojtek. Eventually he was enlisted into the Polish army, and given the rank of Private. 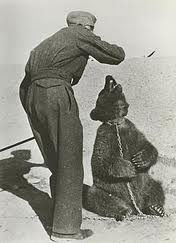 In 1942 near Hamadan, in northwestern Iran, a local boy found an orphaned bear cub wandering alone in the Alborz Mountains. It is not certain what happened to his mother.It is possible that some hunters had shot her. The young lad brought the furry little cub, barely a year old, to a nearby Polish army base, to trade him for a couple of tins of meat. The Polish soldiers were overjoyed to receive him and named the bear cub, Wojtek, which in Polish means, Smiling Warrior. Since Wojtek was still too young to eat solid food, he was fed milk from an empty vodka bottle, and as he grew was fed a rich diet of fruit, marmelades, honey, and syrup. The Polish soldiers treated Wojtek like one of the boys, and enjoyed wrestling with him whenever time permitted. Eventually Wojtek was treated with rewards such as beer and cigarettes (the latter of which he merely swallowed). He even learned to greet his army buddies with a military salute! Wojtek's mere presence, his cleverness, and his playfulness boosted the morale of the entire unit. 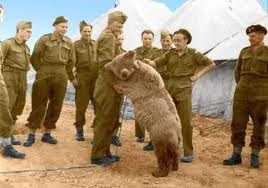 Wherever the Polish army was dispatched, Wojtek travelled with them - to Iraq, Syria, Palestine and Egypt. Amid a convoy of 120 trucks, one truck was always reserved just for Wojtek who often travelled in a specially constructed crate. However on April 14, 1944, while the Polish soldiers were getting ready to board a ship headed to Naples (to join the British 8th Army fighting in the Battle of Monte Cassino) they were confronted with an unexpected bureaucratic glitch. The port officials in Alexandria, Egypt refused to allow Wojtek on board, citing that wild animals were prohibited and that only soldiers were permitted aboard.  After some quick thinking and persuasive arguments, the Polish unit succeeded in acquiring the necessary documentation from Cairo headquarters authorizing Wojtek to join the Polish Army and thus accompany them aboard. In addition to a rank and service number, Private Wojtek even had a pay book! By 1944, Wojtek reached full maturity, standing at 1.82 meters in height ( 6 feet) and weighing 220 kilograms (485 pounds). Private Wojtek was not merely a beloved mascot but a genuine working soldier in the Polish Army. It was evident that Wojtek actually thought himself as human! 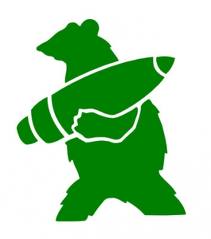 During the Battle of Monte Cassino, Private Wojtek was put to work helping to load 6.5" artillery shells onto trucks to be delivered to the Polish troops in the field. His contributions did not go unnoticed. Headquarters created an official emblem for the 22nd Transport Company of the 2nd Polish Corps, depicting the graphic image of a bear carrying an artillery shell. Such an emblem was a rare homage rarely, if ever, extended to any man. The Polish participation in the Battle of Monte Cassino was one of the most tragic during WW2. Fighting was fierce and deadly. Thousands of Polish soldiers were killed in battle. Private Wojtek survived it. At the end of WW2, Polish army units, including the 22nd Artillery Supply Company were sent to the UK where eventually they were disbanded.Very few Poles returned to their beloved homeland, which became occupied by the communist regime. Instead they opted to remain in England, or dispersed throughout the world - to the U.S., Canada, Australia, South Africa and elsewhere.


After years of enjoying his freedom, and sharing a unique camaraderie with his army buddies, Wojtek's service to the Polish Army came to an end, and he faced the remainder of his life confined in the Edinburgh Zoo. Though parting from his beloved army buddies was a sad moment, it did not mark the end of what was a lifetime friendship. Many of the Polish soldiers visited Wojtek whenever they could and their mere presence, and the sound of Polish being spoken, did much to perk up Wojtek's mood. One Polish soldier even jumped the fence to greet Wojtek and play with him. Wojtek's fame spread far and wide and he became an instant celebrity appearing as a regular guest on the BBC children's program, "Blue Peter". In December of 1963, Wojtek died at the age of 22. There are several memorials honoring Wojtek, a truly remarkable bear and courageous soldier - plaques at the Edinburgh Zoo, at the Imperial War Museum, and at the Canadian War Museum in Ottawa. There is even a sculpture created by artist David Harding which is on display at the Sikorski Museum in London and a carved wooden sculpture on display at Weelsby Woods in Grimbsy. Wojtek has never been forgotten and is remembered with pride and affection. In an interview with Scotsman.com in 2008, Polish veteran Augustyn Karolewski described Wojtek as a playful and gentle creature:

In March 2009, the Scottish Parliament organized a reception to honour Wojtek. And every Remembrance Day, Scottish people gather in the Polish Memorial Garden in Redbraes (a burrough of Bonnington, near Leith in Edinburgh). Many of them carry teddy bears (later donated to charities for sick children.)