World War II was the greatest global catastrophe in the history of human civilization. No other war before or since had been as destructive on a global scale. Over 100 million personnel were mobilised from 1939 to 1945. It has been estimated that there were between 50 million to 70 million fatalities among civilians and military, including victims of the Holocaust. Belligerents included nations from around the world......the British Empire, Union of Soviet Socialist Republics, the United States, France (before invasion), China, Australia, Belgium, Brazil, Canada, Czechoslovakia, Ethiopia, Greece, Mexico, the Netherlands, New Zealand, Norway, Union of South Africa, and Yugoslavia......Germany, Italy, Japan, Hungary, Romania, Bulgaria, as well as Finland, Iraq,Thailand, and numerous puppet states established by the Japanese Empire.

The world had never before seen the likes of the Blitzkrieg as the German Wehrmacht, Luftwaffe, and Kriegsmarine carved paths of destruction and conquest until of all Europe was under its control. Allied troops were mobilised in massive numbers on land, in the air and at sea in a desperate attempt to fend off Hitlers advancing armies. Though British ambitions were high, they suffered enormous losses in men and materiel. Losing was not an option for the Allies however the fear of a humiliating defeat always hung in the balance.

Despite these uncertainties, Britain had a secret army - the largest ever assembled. They were the code breakers of Bletchley Park. Churchill code-named them "Ultra". A virtual army of men and women who labored tirelessly with one purpose in mind - to decipher the German codes, and thanks to the Poles, they were able to learn early on the secrets of deciphering the Enigma. In fact, just days before Poland was invaded by Germany, the team of mathematicians and cryptologists of the Polish Cipher Bureau met with British and French Intelligence, and presented them each with Polish-built replicas of the Enigma machine. Though the Poles were not part of the inner sanctum of Bletchley Park, they collaborated with the Polish Army Signals Corps, located in Boxmoor near London and subsequently cracked the German SS formations cipher.

Supreme Allied Commander, Dwight D. Eisenhower praised Ultra for having been "decisive" to Allied victory; Sir Harry Hinsley, historian of British Intelligence in WWII asserted that Ultra was singularly responsible for shortening the war by two years, perhaps even by four years. Without Ultra, there is no telling what end might have transpired.

Of major concern to Ultra was the danger of having their activities discovered by the enemy. Throughout the war the Germans never suspected that the Allies had broken the Enigma Code and had been routinely intercepting and reading their secret messages. Moreover, the Allies often used the Enigma machine to transmit misinformation directly to German troops. It was indeed a battle of ciphers, and one in which the Allies proved their superiority over and above the Nazi Germans.

The following is a random list, albeit a very brief one of just a few of the battles of World War II. It is meant only to illustrate the vital role played by Ultra that helped lead the way to an Allied Victory.

In the words of Churchill "it was thanks to Ultra that we won the war". However it should also be noted that it was thanks to the genius of Marian Rejewski and his colleagues, that Ultra was even able to get off the ground.

Invasion of the Low Countries

In April 1940 Ultra discovers information about the logistics of the German forces and of their subsequent orders to attack the Low Countries, before the Battle of France in May.

In June 1940, Ultra decrypts a message which reads "KNICKEBEIN KLEVE IST AUF PUNKT 53 GRAD 24 MINUTEN NORD UND EIN GRAD WEST EINGERICHTET". Translated it means: "The Cleves Knickebein is directed at position 53 degrees 24 minutes north and 1 degree west". The message clearly indicated that the Germans were developing a radio guidance system for their bombers. Ultra continued to play a vital role in the so-called Battle of the Beams.

Air Chief Marshall Sir Hugh Dowding, Commander-in-Chief of RAF Fighter Command was able to receive frequent reports from Ultra thanks to a teleprinter link from his headquarters at RAF Bentley Priory to Bletchley Park. He received vital information concerning German strategy, strength and location of Luftwaffe fleets, as well as advance warning of Nazi bombing raids, information which greatly contributed to the British victory.


Battle of the Atlantic

The contribution made by Ultra intelligence to the Battle of the Atlantic was crucial to the war effort and the very survival of the British Isles. It wasn't until June 1941 that Bletchley Park finally began to read U-boat messages. As a result, Allied Command, having advance information on the location of U-boat "wolf packs" could divert their transatlantic convoys to safety, and sink U-boat supply vessels. However, on February 1, 1942, the U-boat messages became once again unreadable and remained so until the end of the year. The reason was that the Germans had modified the Enigma machine so that it operated with four rotors instead of three.

Ultra contributed to Montgomery's victory at the Battle of Alam el Halfa by providing Allied troops with timely warning of Rommel's planned attack.

In the period between December 1940 to February 1941, Ultra intelligence provided invaluable information that helped the British army's victory over the much larger Italian army in Libya.

Ultra intelligence were instrumental in providing vital information to Wavell and Auchinleck which helped them to prevent Rommel's forces from reaching Cairo in the autumn of 1941. Moreover, Ultra intelligence deciphered Enigma messages transmitted by Hagelin, the Luftwaffe and the German navy which gave the Allies an enormous tactical advantage. As a result they were able to sink about half of the ships supplying the Axis in North Africa.

In an effort to disguise the source of Intelligence for these attacks, the Allies often sent "spotter" submarines and aircraft to search for Axis ships. The Allies intentionally maintained a visible presence and were observed by Axis forces who naturally assumed that their position was discovered by conventional Allied reconnaissance. The Germans believed that the Allied positions in the Mediterranean were reinforced by about 400 submarines and a huge fleet of reconnaissance aircraft on Malta. In reality, however, the Allies had only 25 submarines in the area, and as few as three aircraft. The ruse worked.

But the elaborate strategy also provided Allied Command with a high degree of security among their own personnel. As long as the crew was unaware of the intelligence source leading to the Axis ships, Allied missions would not be endangered in the event that the crew were to ever be captured and interrogated.
Quite often two or three additional search missions would be sent out to cover varying areas in addition to the one spotting the Axis ships.

Ultra also contributed to the success of Montgomery's offensive in the Second Battle of El Alamein, by having provided him with a detailed list of Axis positions and strength. In addition Ultra reported among other details, Rommel's own reports to Germany during the course of battle.

The Allied forces depended on Ultra for information on positions and strength of German troops, whose input was of immense importance to the Allied mission. Ultra even planned elaborate strategic deceptions that fooled Hitler and the German High Command.

As the Allies were advancing towards Germany, Ultra frequently provided detailed tactical information, and insight to Hitler's failing judgement, that is, he often ignored the advice of his own generals and commanded German troops to fight 'to the last man'.

Ultra intelligence provided vital information about the Germany's plans to invade England in 1940. Had it been carried out, Britain would have been well prepared.

Ultra warned Allied troops of a major German counterattack at Mortain, and provided the Allies the advantage of surrounding the forces at Falaise.

Ultra contributed to the monitoring of German developments at Peenemünde and the collection of V-1 and V-2 Intelligence from 1942 onwards. The major intelligence reports came from the Polish Underground members who managed to salvage one of the V-1 rockets after it had crashed into the Bug River in Poland. Detailed information and diagrams were provided to Allied Command in Britain.

THE BATTLE OF THE ATLANTIC


Editors Note: Much gratitude is owed to the code-breakers of Bletchley Park for continuing the work that the Poles started.  It is disappointing that this last video in particular made no mention whatsoever of the Polish contribution to breaking the code. This honour has been misattributed to Bletchley Park.

In the words of Gordon Welchman, a former Bletchley Park cryptologist,


"Ultra would never have gotten off the ground if we had not learned from the Poles, in the nick of time, the details both of the German military... Enigma machine, and of the operating procedures that were in use." 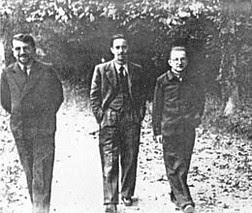 This concludes the special series on The Enigma Machine. I do hope that you enjoyed reading this series and I thank you for visiting Polish Greatness (Blog). For further reading and research please click on the following link:

The Enigma Machine: A Compendium of Resources for the Enigma Enthusiast

Posted by Polish Greatness Blog at 2:01 AM