"Hungary and Poland are two eternal oaks.
Each of them shot up a separate and distinct trunk,
but their roots widely scattered in the ground
are intertwined and knitted invisibly. Hence the existence and vigor of one is the condition of the other's life and health."
Stanlislaw Worcell (1849)


On March 23, 2007 the Polish Sejm and the Parliament of the Republic of Hungary unanimously approved the adoption of the resolution establishing March 23rd as the Day of Polish-Hungarian Friendship. This Act reaffirms the unique relationship between the Polish and Hungarian peoples that has been in existence since the Middle Ages and which continues to forge the bonds of common ideals, mutual respect and affection, and shared political ambitions. Such a relationship is a veritable phenomenon that is unparalleled in any other two nations throughout history.

Polish-Hungarian Friendship Day is celebrated concurrently in Poland and Hungary. This year the honour of hosting festivities is bestowed upon the city of Poznan in which the richness of the Magyar heritage will be celebrated. Though the official Day is March 23rd, Polish-Hungarian Friendship Day has already begun (on the 17th of March) and will continue until March 28. Among the many events scheduled are theatrical performances, films, exhibitions, concerts, workshops, scientific exhibitions, and much more.

Polish and Hungarian Presidents, representatives from governments of both countries, and non-governmental organizations, academic institutions and associations all take part in a bi-national annual celebration of a common history and culture, past and present.

The "twin cities" of Györ and Poznan have demonstrated mutual co-operation and support for exhibitions and fairs; for example Györ representatives regularly attend the Poznan International Fair of Books for Children and Youth, Tour Salon, John's Market (Jarmark Świętojański). Conversely, last year Poznan representatives participated in Györ's festival of "The Magic of Baroque", the International Children's Olympiad and the International Exhibition of Books.

Moreover in the light of the Polish and Hungarian Presidency of the EU Council, theirs is a fervent commitment to consolidate the solidarity between their two nations, its cities and regions.

Good relations between Poland and Hungary date can be traced back to the Middle Ages. In fact in the 15th century the two countries shared a Polish king, Władysław III of Varna, who at barely twenty years of age, died in battle, fighting the Turks at Varna, Bulgaria. His name lives on today. There is a boulevard in Bulgaria and a district named after Vladislav Varnenchik and even a professional Bulgarian football team which in earlier years was named after him. There is also a symbolic cenotaph bearing his name in an ancient park at Varna. 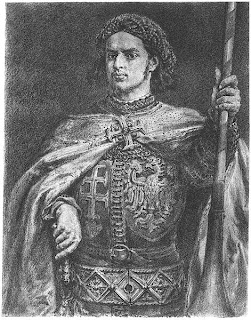 In the 16th century, Poland elected Stefan Batory, an Hungarian nobleman as their King. Batory came to be regarded as the greatest King in Polish history. 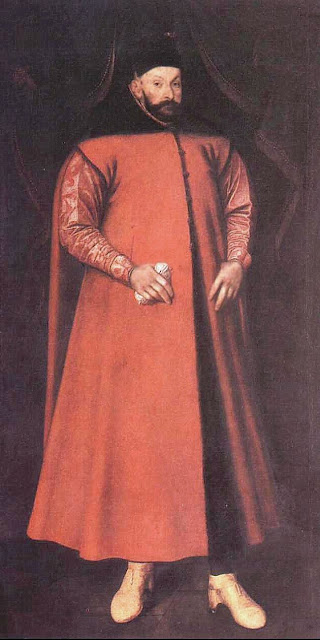 
During the Hungarian Revolution of 1848, Józef Bem, a Polish General became a national hero for both Hungary and Poland.

During the Polish–Soviet War, (1919-21), Hungary was prepared to dispatch 30,000 cavalry troops to Poland's aid. However the Czechoslovak government refused to allow their passage through the demilitarized zone. (The zone had been created just several months earlier at the end of the Czechoslovak-Hungarian war.) Nevertheless, some Hungarian munitions trains did manage to reach Polish troops.

Up until the 18th century, Poland and Hungary shared an historic common border between Poland and Carpathian Ruthenia (also referred to as "Carpathian Rus") and governed by Hungary. But after World War I, the Allies transferred Carpathian Ruthenia from defeated Hungary to Czechoslovakia. In the months leading up to World War II, the area became known as "Carpatho-Ukraine" because of its large population of Ukrainian nationalists.

On September 30, 1938, following the Munich Agreement, Czechoslovakia was slated for takeover by Nazi Germany. It set into motion diplomatic and paramilitary collaboration between Poland and Hungary in an effort to restore their historic common border. They realized their first goal, with the First Vienna Award on November 2, 1938.

A﻿ demonstration in favour of the common Polish-Hungarian border in Budapest, October 1938 (00:01:11min)

Germany was opposed to the existence of a common Polish Hungarian border but in March 1939 Hitler suddenly changed his stance and authorized Hungary to take control of the remainder of Carpatho-Rus (a territory which began to refer to itself as "Carpatho-Ukraine").  However the remainder of Slovakia was off limits despite Hungary's claim to its territory.

Hitler planned to strike Poland from a staging ground in Slovakia but changed his mind about the common Hungarian-Polish border. The Organization of Ukrainian Nationalists (OUN) were amassing ever-larger military troops along the southeastern border of Poland which placed Poland in imminent danger.  Though the OUN were allies of Germany, Hitler suspected that should they join German troops in the planned invasion of the Soviet Union, the OUN would surely demand their independence.  (Moreover, Hitler had designs on Ukrainian natural and agricultural resources.)

Carpathian Rus became a sore point for Hitler. He realized his error when his request to transport German forces across Carpathian Rus into southeastern Poland was denied by Admiral Horthy's government as a matter of "Hungarian honour". The common Polish-Hungarian border based on their long-standing friendship, presented itself as an obstacle. 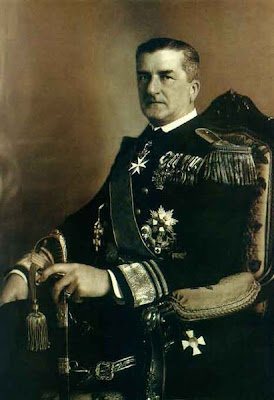 By refusing German passage, the Hungarian government allowed members of the Polish government and tens of thousands of Polish military troops and personnel to escape from Poland into neighboring Hungary and Romania. From there the Poles made their way to France and French-mandated Syria to continue their military operations. At that time, Poland was the third-strongest Allied nation, after Britain and France. For a period of time, many Polish and British intelligence agents and couriers, including Krystyna Skarbek, were able to access Hungary's Carpathorus as a route to cross the Carpathian Mountains to and from Poland. 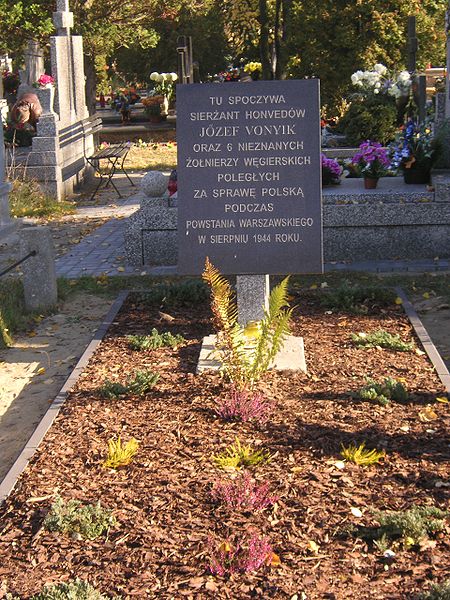 Grave of a Hungarian Honved captain and six of his men who fell, fighting on the Polish side
in the 1944 Warsaw Uprising.


After World War II, during the Hungarian Revolution of 1956, the Polish people demonstrated their support for the Hungarians by donating blood for them. By November 12, 1956, over 11,000 Poles had donated blood. Massive shipments of medical supplies, totaling 44 tons were shipped by the Polish Red Cross to Hungary by air and even larger shipments by trucks and rail. 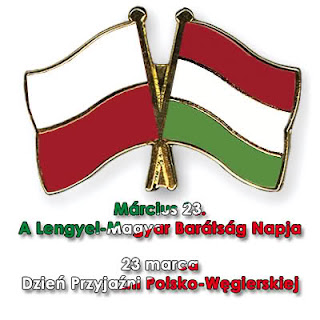 From Polish to English
Pole and Hungarian cousins be,
good for fight and good for party.
Both are valiant, both are lively,
Upon them may God's blessings be.

From Hungarian to English
Pole and Hungarian — two good friends,
joint fight and drinking are their ends.