One of the most sensational battles of World War II was waged between the Polish Home Army and the Nazi German occupiers of Wilno. It was called Operation Ostrama Brama, (Operation Gate of Dawn) and was part of the larger Operation Tempest, the national uprising that lasted from July 7, 1944 to July 14, 1944.

General Tadesuz Bor-Komorowski, Commander-in-Chief of the Home Army ordered the Armia Krajowa districts of Wilno and Navahrudak to capture Wilno from German control and maintain control over it before the Soviets could reach it. On June 12, 1944, Bor's orders were put into action. General Aleksander Krzyzanowski "Wilk", Commander of the Home Army District in Wilno (now Vilnius), regrouped all Polish partisan units in the northeastern section of Poland to launch the assault from inside the city as well as from it's perimeter.  Fighting erupted on July 7, 1944. Over 12,500 Home Army (AK) soldiers launched a vicious attack on the German garrison and succeeded in seizing most of the city center. Fighting was extremely fierce and lasted until July 14. Meanwhile in the eastern suburbs of Wilno, AK units were cooperating with reconnaissance groups of Soviet 3rd Belorussian Front. 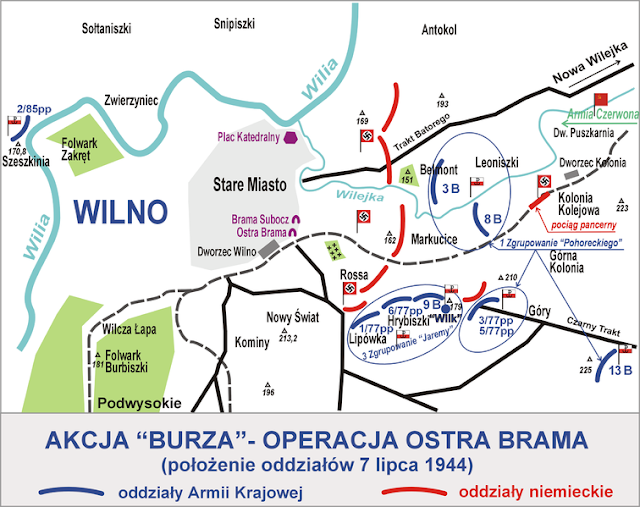 During the operation, General Krzyzanowski attempted to consolidate all Polish partisan groups into a re-created Polish 19th Infantry Division, but it was too late. On July 15th, the advancing Red Army had already entered the city and the NKVD began to arrest all Polish soldiers and officers. In a strategy typical of Soviet chicanery, officers of the 3rd Belorussian Front extended an cordial invitation to Polish officers to a joint meeting at their headquarters, and then proceeded to arrest them when they arrived. About 5,000 Polish NCO's, soldiers, and officers were deported to a provisional internment camp located in Medininkai, a suburb of Wilno. They were given the "option" of joining the 1st Polish Army (Soviet-backed). The majority of Poles refused to join the Soviet army. They were deported to the wastelands of the USSR.


A secret NKVD/NKGB report dated July 17, 1944, from Lavrenti Beria to Stalin, Molotov and Antonov, reveal the extent of Soviet conspiracy against Polish forces. The following is an English translation:

Following information were received today from Comrade Tcherniakowsky:
The so-called Major-General “Wilk” / Kulczycki was summoned today. Wilk was told that we are interested in the locations of Polish formations, and that it would be prudent that our officers were familiar with them. Wilk agreed, and gave us 6 such locations, where his regiments and brigades are stationed. Additionally, we expressed our interest in his officers’ core, and proposed that he gathers all regimental and brigade commanders, their second in command, and chiefs of staff. “Wilk” also agreed to that, issued the necessary orders, and gave them to his communications officer, who immediately left for his headquarters.

Taking under consideration, that we received locations of Polish[Home Army] formations, the following operations’ plan was established:

1) Experienced generals and People’s Commisars for the State Security of NKVD were dispatched in order to approach the Poles and to investigate [further].

2) At the same time, units of the 3rd Belarusian Front were dispatched to disarm the Poles.

3) Today, at 1900-hours, a Border Security unit, as well as the leadership cadre of men and women of the NKVD were dispatched to disarm the [Polish] officers’ cadre.

4) Tomorrow, on 18th July, at 4 o’clock in the morning, units designated to disarm the Poles will be move to their deployment positions, will receive orders, and will begin the operation. They will report about the results of the operation.

AK Headquarters ordered an immediate retreat of all Polish units to Rudininkai Forest. By July 18 approximately 6,000 soldiers had reached the area, joined by an additional 12,000 volunteers. However, Soviet air reconnaissance discovered their locations, and they were subsequently surrounded by Soviet NKVD agents. Polish Command attempted to split their units in an attempt to try to break through to the Bialystok area, but to no avail. Most of the Polish forces were captured and interned.

In a subsequent report issued by Beria to Stalin on July 20, 1944, Soviet troops were reported to have disarmed a total of 6,000 Polish soldiers, among whom were 650 officers and NCO's. In the 2-day crackdown, the Soviets confiscated a large quantity of weapons including 5,100 rifles, 350 machine guns, 230 light and heavy machine guns, 12 light artillery pieces, 27 vehicles, 7 radio transmitters, a substantial cache of of ammunition and grenades, as well as 350 horses.

In the vicinity of Wilno, Lt. Col. Maciej Kalenkiewicz "Kotwicz" and approximately 80 to 100 soldiers remained hidden in the forests but sprung into action on August 21, engaging the NKVD expeditionary forces in battle. But Soviet units were stronger having received additional reinforcements from NKVD Intelligence-Search Unit 3, Battalion 32 (commanded by NKVD's Captain Shulkha, and Capt. Tshikin of the Regional NKVD detachment.)

Kalenkiewicz was trained as a Cichociemni and on December 27, 1941 parachuted into Nazi-occupied Poland to assume command of the Nowogrodek Home Army.  Due to pilot error, instead of landing in the area of the General Governement, the plane was landed smack in the middle of territory annexed by the Third Reich. The pilot and crew were arrested as soon as they landed, but later were able to escape from captivity, recapturing their weapons and killing all the Germans. In the meantime, Kalenkiewicz and his team had already reached Warsaw where Kalenkiewicz met with General Stefan Rowecki (Grot) and was accepted into the Association of Armed Struggle, the predecessor to the Home Army.


Kalenkiewicz was nick-named by the NKVD as the "handless major". He was severely wounded in his right arm during the battle against the Germans at Iwa on June 24, 1944. However he continued to take part in ambush operations against a German transport convoy near the estate of Kwiatkowce, situated about 4 km from Subotnik. (During the battle his unit was also under attack by Soviet troops.) Kalenkiewicz developed gangrene in his wounded arm and on June 29th had to undergo amputation of his hand at Antoniszki, near the Oszmina. Despite his serious condition and very high fever, on July 9th he still reported to General "Wilk" for service but his condition prevented him from taking part in the liberation of Wilno from the Germans. Major Kalenkiewicz and 38 AK soldiers were killed in action during the Battle at Surkonty on August 21, 1944.

To the Poles Operation Ostrama Brama was not a victory though they achieved a tactical victory over the German forces. The destruction of Polish units and subsequent occupation of the city by the Red Army was a bitter defeat to the Polish Home Army who struggled to achieve the goals of Operation Tempest.