GROM is at the forefront in the global war against terrorism. They are Poland's secret weapon as well as a valued ally of western nations. They have trained with the best in the world - the SAS and U.S. Navy Seals, among others. What makes GROM so unique is that they are a hybrid elite force, integrating the most effective and most deadly tactics acquired from each of the top special forces around the world. GROM is so highly rated that the U.S. Navy Seals have called them the "Polish Navy Seals". GROM and the Navy Seals have collaborated closely in many international missions, including Operation Iraqi Freedom.

As part of this special series, we take a look at some of the most powerful weapons that have been produced during the past several years. Because the field of weaponry is so vast, only a few can be presented here. Bear in mind that the specifications that are to follow are far from comprehensive, but rather rudimentary and intentionally incomplete. Nevertheless it is meant to be a showcase of lethal weapons; weapons that are part of the arsenal of some of the world's special forces, including GROM.

The Bushmaster ACR (Adaptive Combat Rifle) is a relatively new design in the arsenal of weapons and is being used by the United States Army, as well as by GROM forces. The design is borrowed from the Magpul Masadan, which is an amalgamation of the best features of rifle designs recently developed: the short-stroke gas system from the Armalite AR-18; the upper receiver, charging handle location, from the FN SCAR; the liberal use of polymer components from the Heckler & Koch G36/XM8; the trigger pack from the M16/AR-15; and the barrel from the M16. The Busmaster also includes a quick-change barrel/trunnion system, adjustable gas regulator, non-reciprocating charging handle and storage compartments in the stock and grip. The weapon's caliber can easily be changed by replacing the bolt head, magazine and barrel. Incidentlaly the rifle was named after the Siege of Masada, though Magpul Industries is not Jewish-owned or Israeli-backed.

The Heckler & Koch MP5, the "Maschinenpistole 5" is a 9mm submachine gun developed in the 1960s by a team of German engineers for the small arms manufacturer Heckler & Koch GmbH (H&K)and Oberndorf am Neckar. The MP5 is still being manufactured and is one of the most widely used machine guns in the world, used by countless number of military forces, police units and intelligence and security organizations. In the 1990s Heckler & Koch developed a new successor to the MP5, called the Heckler & Koch UMP, both of which remain in wide production. There are virtually dozens of variants of the MP5 on the market - for example the MP5A2, which is a lightweight, air-cooled, selective fire delayed blowback operated 9x19mm Parabellum weapon with a roller-delayed bolt. It fires from a closed bolt (bolt forward) position. The MP5-N ("N" for Navy)was developed especially for the United States Navy in 1986. This particular model has a collapsible stock, a tritium-illuminated front sight post and a 225mm (8.9 in) threaded barrel for use with a stainless steel sound suppressor (made by Knight's Armanent Company) combined with quieter subsonic ammunition. The MP5K (K for the German word kurs, meaning "short") was developed in 1976. It was a shortened version of the MP5A2 and was designed for battle in close quarters, ideally used by clandestine operatives and special services. The MP5K model does not have a shoulder stock (the receiver end is covered with a flat end cap, featuring a buffer on the inside and a sling loop on the outside) and the bold and receiver were shortened at the rear. It produces a higher rate of fire than the MP5. The barrel, cocking handle and its cover were shortened and a vertical foregrip was used to replace the standard handgard. The barrel ends at the base of the foresight preventing the use of any kind of muzzle device. The MP5 is being manufactured under license in several countries including Greece, Iran, Mexico, Turkey, Pakistan, and the United Kingdom. It is the Ultimate weapon for battle in close quarters. It's lightweight, small, but wields deadly accuracy. 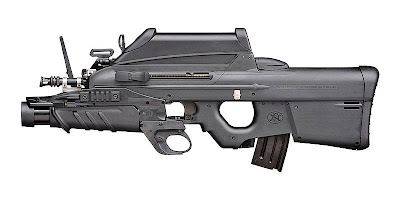 The FN F2000 was designed by Belgian manufacturer, FN Herstal and made its debut in March 2001 at the IDEX defense exhibition at Abu Dhabi, in the United Arab Emirates.

The F2000 is a modular weapon system. Its principal component is a compact 5.56x45mm NATO caliber assault rifle configured in a bullpup layout. The F2000 is a selective fire weapon operating from a closed bolt. The rifle consists of two main assemblies: the barreled receiver group and the frame, coupled together by means of an axis pin located above the trigger guard. The barrel group has an integral ML-STD 1913 Picatinny rail used to mount optical sights. The frame or lower receiver contains the trigger group, the bolt and bolt carrier assembly, return mechanism and magazine well. The removable handguard is installed in front of the trigger which completes and enclosed the trigger guard.

The F2000 is a gas operated, fully automatic and ambidextrous bullpup rifle. One of the modules developed for the F2000 system is a proprietary lightweight 40 mm under-slung GL 1 grenade launcher that uses standard low-velocity 40x46mm grenades. The launcher is a single-shot breech-loaded pump-action weapon with a barrel that slides forward for loading and unloading (like the M203 grenade launcher), locked by axial rotation of the barrel. 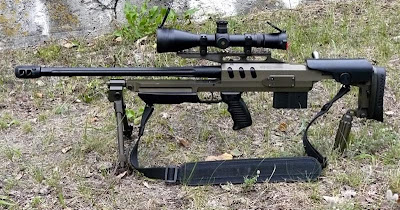 When Poland became a member of NATO in 1999 the Polish Armed Forces were required to produce firearms that were compatible with NATO standards. In the early 2000s, Aleksander Lezucha embarked on a joint venture with the Polish Science Research and Information Technology Ministry to create a new standard sniper rifle. During the development stage the rifle was named "Alex" but received the military designation of "Bor" thereafter.

The Bor is a bullpup-configuration bolt-action magazine-fed sniper rifle. The barrel length (of 680 mm, or 26.8 in) provides increased accuracy while minimizing the overall length of 1,038 mm (40.9 in). Weight has been reduced by the use of a free-floting fluted barrel, without sacrificing accuracy. The muzzle is fitted with a double-baffle muzzle brake, which is claimed to reduce recoil by up to 30%. The "in-line" design of the barrel-receiver group also directs recoil rearwards in a straight line, minimizing muzzle flip. A sturdy adjustable bipod is fitted to the front of the fore-end. The rifle features a fully adjustable buttstock and cheek riser. A folding/adjustable monopod located behind the magazine on the inside of the buttstock can be used to support the rifle in firing position during extended periods of deployment. No iron or emergency sights are provided; a MIL-STD-1913 Picatinny rail is mounted above the centerline of the barrel, over the receiver area for mounting various optical sights. The standard telescopic sight is a Leupold 4.5-14x50, with sight grid mil-dot reticle, parallax correction and an adjustment range of 100 MOA.