From Lebensraum to Genocide

, or living space, has been an ideology deeply rooted in German history and folklore long before it ever became part of Nazi aspirations. It had its origins in the 11th century when the first wave of German settlers spread throughout central and eastern Europe due to overpopulation of their own cities and towns.  In what was termed Ostsiedlung

, or "settlement in the East", another massive migration took place in the 12th century as German settlers responded to the invitation by Polish Princes to immigrate. By the 14th century, there were well over 150 towns and villages founded by the German inhabitants, largely throughout the area of what is now Galicia and Southern Silesia.

The term lebensraum was coined by Friedrich Ratzel

in 1901 to describe the unification of Germany and its expansion of colonies, following the examples set by France and England, and that of the United States in its westward expansion. Ratzel's early studies of zoology and geography was the foundation upon which he conceived of the theory that formed the crux of German geopolitik - that there was a direct correlation between people's development and their geographical environment, and that the successful adaption to one location would naturally progress beyond it's perimeters.  In essence, Ratzel claimed that expansion was a natural and an essential condition for any healthy species to adapt and thrive, and he expounded on the value of overseas colonies to which Germans could migrate and prosper. Though Ratzel did not propose expansionism within Europe per se, his contemporaries refashioned his ideas to suit their own military and political exploits.  In 1912, General Friedrich von Bernhardi wrote in his book, "Germany and the Next War",  that lebensraum was a "biological necessity"  and that "without war, inferior or decaying races would easily choke the growth of healthy budding elements.

of the 20th century in South West Africa, which is today Namibia. In 1883, Franz Adolf Eduard Luderitz purchased some land from the Nama tribe, and a year later after some deliberation with the Imperial British government, the territory was declared a German protectorate.

From the outset, the Germans demonstrated a sense of entitlement to the land and its resources and frequently confiscated native land, parceling them out to German settlers. By 1903 the Herero

tribe had ceded a quarter of their territory amounting to 50,000 square miles and lost much of their cattle to the German warlords and settlers. While some of the Germans considered the Herero a source of slave labor, others preferred their extermination. The Germans took every advantage to despoil their wealth and livelihood and when the Herera finally rose up in revolt, the Germans mobilized their Plan. 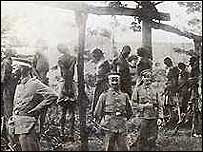 The Herero tribes were exploited,brutally oppressed and murdered. German reinforcements were brought in from Berlin to crush the resistance with military force. General Trotha, who was appointed Supreme Commander of the colony, had this to say about the Herero:  "I believe that the nation as such should be annihilated, or, if this was not possible by tactical measures, have to be expelled from the country..." In the Battle of Waterberg

on August 11-12,1904 the Germans defeated up to 5,000 natives and forced the remainder to flee into the desert where many collapsed from exhaustion.  On the order of Trotha, the German troops pursued them and systematically shot every man, woman, and child.  Many Herero escaped seeking asylum at a British protectorate. They travelled by way of the Omaheke desert but were trapped when Trotha ordered the desert to be sealed off.  Many perished in the desert trying to dig for water. Survivors were imprisoned on "reservations" which were in fact concentration camps. The Herero were targeted for extermination, thousands being sent to death camps on what was called "Shark Island".  By 1908, 50-80% of the population had perished as a result of malnutrition, disease, and forced labor. 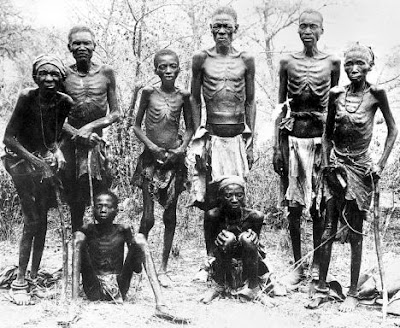 A German scientist, Eugen Fischer was brought in to conduct medical experiments on the African prisoners, subjecting them to sterilization and injections of smallpox, typhus, and tuberculosis.  Extensive racial tests were conducted to measure the features and appearance of the Herero, and they were classified as racially inferior. These and other German tactics had the preliminary earmarks of what was to become the Final Solution during WWII.


By 1914, and in the midst of WWI, Berlin had already prepared a proposal which stipulated postwar peace terms. Convinced that victory was within their reach, the Germans anticipated annexing part of Poland, followed by the deportation of the Polish and Lithuanian population and settlement of Germans in their stead. (German historian Andreas Hillgruber maintains that this policy was the forerunner to the German policy of annexation and deportation of WWII.)

Contrary to popular belief, lebensraum was not coined by Hitler though he expounded on its theory at great length in his book Mein Kampf

-  a topic that was quite commonplace in Germany during 1920s. Volke Ohne Raum (People Without Space) was another book of the same ilk written by Hans Grimm and published in 1928, and proved to be more popular than Hitlers book. It was during this period of time that the concept of lebensraum was transformed to accommodate Nazi ideology, emphasizing their strategy of pacification, the colonization of Eastern Europe, and the Final Solution

pertaining to the Jews.

(Masterplan East) was concocted by Hitler that established a blueprint for genocide and ethnic cleansing in Poland and other countries to the east. The documents were divided into two parts, the Kleineplanung (Small Plan) which specified actions that the Nazis were to accomplish during the war, and the Grosseplanung (Large Plan) which detailed the actions to be gradually implemented after the war and during the subsequent 25 to 30 years. According to Nazi projections during the "Small Plan", the following nationals were targeted for "elimination":

Moreover the Nazis established varying percentages for different peoples to undergo "Germanization"; Czechs (50%), Ukrainians (35%),  Belarusians (25%).  According to their Plan, the Nazis intended to exterminate, expulse, Germanize, or enslave the Slavs in conquered territories.

In the "Big Plan", to be put in effect after the war, the Nazis envisaged the deportation from eastern occupied territories of 45 million "non-Germanizable" people, that is, people considered by the Nazis to be "racially undesirable", such as 100% of Jews,  Poles (85%), Belorusians (75%), Ukrainians (65%) and to deport them to Siberia. The Nazi plan was to allow 14 million prisoners to remain, and serve as slave labor to the 8 to 10 millions of German settlers, who were to fulfill the Nazi vision of lebensraum and populate Eastern Europe.  Latvian, Lithuania and Estonia would be Germanized within 20-25 years.

In 1941, the Nazis deliberated on the procedure for the complete destruction of Poland, to occur within 10 to 20 years, that is, they envisaged the Polish nation as devoid of ethnic Poles and settled entirely by German colonists. The destruction of Poland began in September 1939 with the deportation of Polish intelligentsia, bans on Polish culture, Polish education, and even speaking in Polish.  The Nazis expected that deportations of Poles to Siberia would guarantee their assimilation and eventual extinction as a nation.  Their 1952 projections estimated that roughly 3-4 million non-Germanized Poles would remain. Those who refused to be Germanized would be prohibited to marry or receive medical help when needed.  Children who could be Germanized were forcibly taken from their parents and deported and resettled with German families.

Several policies outlined in Generalplan Ost were implemented by the Nazis during the war:   Operation Tannenberg(1939): code name for one of the extermination actions directed at the Poles. Before the outbreak of war, the Nazis, with the assistance of the Volksdeutsche, compiled a list of 61,000 Polish intelligentsia, who were to be either interned or shot:  A-B Aktion (1940): the Nazi plan to eliminate Polish elite, intellectuals and upper classes, (leaders, professors, teachers, scientists, and many others) Over 30,000 were arrested. About 7,000 were massacred in Palmiry Forest, and the remainder interned in German concentration camps.  Einsatzgruppen death squads and concentration camps were organized to deal with the Polish elite.  Parts of Poland were annexed to Germany quite early in the war, and with the exception of eastern Poland, the remaining territory was under Nazi General Gouvernement.


It could not be confirmed whether the Generalplan Ost had any connection to the Nazi crimes against humanity and the "Final Solution" of the Jews.  Documents were destroyed by the Nazis at the end of the war.  The only evidence remaining were memoranda and letters referring to the Generalplan Ost.

But during the Nuremberg Trials, Adolf Eichmann, the SS officer placed in charge of logistics by General Reinhard Heydrich, admitted responsibility for the deportation of 500,000 Poles.

One hundred years after the Herero genocide, on August 14, 2004, German Minister Heidemarie Wiedzorek-Zeu attended a commemorative ceremony in Namibia. In her speech to the audience she acknowledged that the action taken by the Germany army against the uprising was in fact a genocide. She added that the German government would not provide compensation to the victims' descendants, but would continue the economic aid already in place to the tune of $14m a year.  A group of Herero had filed a claim against Germany in the US, for $ 4 billion in compensation.

Nothing that the German Minister said amounted to an apology, and following her speech the crowd demanded an apology.  Her response: "Everything I said in my speech was an apology..."