On July 3rd the German infantry finally caught up with the Panzer division and were given the go-ahead by Hitler to resume their advance eastward.  The timing couldn't have been worse. They were caught in a heavy rainstorm, usual during Russian summers, and were slowed down to a virtual crawl along the muddy roads.  Benefiting from this delay, Soviet troops hastily organized massive troops and launched a ferocious counterattack against Army Group Center.

Army Group Center's mission was to reach Smolensk, an important Soviet command post, and were headed straight towards six Soviet armies poised and waiting along the defensive line  On July 6th the Soviets backed with 700 tanks launched an attack on the 3rd Panzer Army but were ultimately repulsed.  The Germans easily defeated the Soviets, backed with overwhelming air superiority.

The 2nd Panzer Army crossed the Dnieper and advanced on Smolensk from the south, while 3rd Panzer Army (which defeated the Soviet attack) advanced on Smolensk from the north. Caught in the German pincer were three Soviet armies.  By July 18th the Panzers attempted to close the gap, and were within ten miles of accomplishing their objective, however the trap would not close until July 26.  The Germans captured 300,000 Red Army soldiers but it would be another ten days before the pocket could be liquidated.  During that time about 100,000 Red Army soldiers managed to escaped, and quickly repositioned their troops for the defense of Moscow. 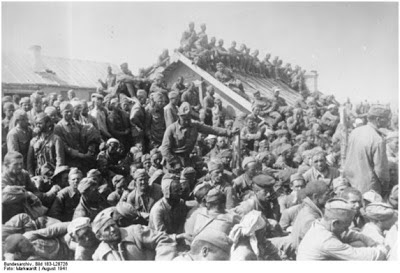 It took all of four weeks for German Command to realize that they had seriously underestimated the strength of Soviet armed forces.   German troops had been deployed with insufficient supplies, which had very quickly diminished to alarming levels.  It became imperative for them to slow down operations long enough in order to permit reinforcements to catch up with them.  In the face of such  interminable delays, German troops were faced with the gravity of their predicament, and were desperate in their efforts to strengthen their positions.  The situation was hopeless.


The original plan of encirclement had failed dismally, as huge numbers of Soviet units succeeded in escaping the German pincers.  Consequently, Hitler was convinced that the only way of defeating the Soviets was to destroy their economic resources and bring enemy forces to a virtual halt.  But in order to achieve that objective, the Germans would have to launch a two pronged attack:  to seize the main industrial zones of Kharkov, the Donets Basin, and the oil fields of the Caucasus in the south, and the capture of Leningrad (a vital military center)  in the north.

Hitler's plans were met with blistering outrage from his generals, in particular Fedor von Bock, who demanded that German troops had to attack Moscow outright. The capital city was a major center for arms production, as well as the vital epicenter of Soviet communications and transportation.  Moreover, the capture of Moscow would have had enormous psychological impact on the enemy's morale.  Reports from German intelligence indicated that Soviet troops had been heavily deployed in and around Moscow.  It would not be an easy invasion.  Irregardless, Hitler stubbornly refused to heed the warnings and, undermined his own Commanding Officer, by giving Guderian the order to dispatch Army Group Centre tanks to the north and south.  Moscow would have to wait for now.