Operation Barbarossa was the greatest battle ever waged in the history of mankind, and the greatest failure.  Hitler's plans for conquering the Soviet Union were doomed from the start.  Despite early victories, German troops were plagued by an interminable series of setbacks, delays, and grievous losses in troops and war materiel, not to mention the fatal hazards of the Russian winter.  It was a turning point which marked Germany's decline and ultimate defeat and one from which it would never recover.

Nazi Germany's trademark, the surprise blitzkrieg attack, earned them the respect of the Axis, and terror of nations throughout Europe.  However, blitzkrieg was a tactic best applied to countries of smaller size, and was less effective against a country the size and span of western Soviet Union. Nevertheless, Soviet troops were literally caught by surprise, and because of their military unpreparedness, inexperience, and obsolete war machines, were virtually annihilated by a constant barrage of German firepower.  It was "every man for himself" as Soviet troops, led by inexperienced leaders (and in many cases, no leaders at all) struggled against a far stronger and skilled enemy.  Soviet casualties were devastating.

That Soviet troops were so easily overpowered was due to several factors, not the least which was the drastic shortfall of officers in the Red Army.  Years earlier, Stalin decimated vast numbers of his own officer corps, during the purges of the interwar years and the Great Purge of 1936-38.


Moreover, The Soviet campaign against Finland in 1939-40 (The Winter War) was a dismal failure: the Red Army had 30 times the tanks, 100 times the airplanes, and three times the number of troops than the Finnish armed forces and despite their overwhelming numerical superiority, still could not defeat them. This factor more than any other whetted the German appetite that an invasion into Soviet Union would be fast and easy.  Hitler was adamant about launching an attack in 1941 to take advantage of the Soviets weaknesses.  A year later would have been too late. 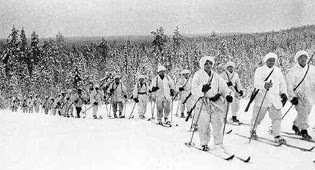 Though many Soviet bases were established along the new western border of the Soviet Union, they were not sufficiently reinforced, and hence easily overrun by the invading Germans.  Operation Barbarossa has always been referred to as Germany's invasion of the Soviet Union.  Technically speaking, the Germans had actually invaded Soviet-occupied eastern Poland, and other Soviet occupied territories of the Ukraine, Belarus and Lithuania.  Nevertheless, it is not a misnomer that Germany invaded the Soviet Union;  Operation Barbarossa was the spearhead that punctured the "buffer zones", and made an advance possible into the heartland of western Soviet Union - to Leningrad,  to the Caucasus, and finally, an attempt on Moscow herself.

As if by Providence, heavy rains followed by the arctic cold of a Russian Winter, severely impeded the German advance towards Moscow.  The death toll among German troops began to rise dramatically as they succumbed to frostbite and disease.  On November 27, 1941, General Wagner (Quartermaster General of the German Army) stated:  "We are at the end of our resources in both personnel and material. We are about to be confronted with the dangers of deep winter." 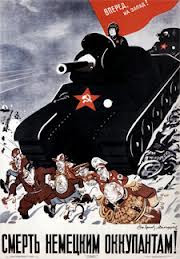 Though German command made an intensive research into the failures of  the 1812 Napoleon campaign into the Soviet Union, they failed to heed the lessons of the past and shipped their armies on an ill-fated mission. History was about to repeat itself - but this time on a larger scale.  In one of the many directives issued by Hitler, was one compelling his armies to "stand or die", in the face of Soviet counterattacks.

The consequences were devastating as casualties mounted into the hundreds of thousands of dead German soldiers.  The Red Army was very much in its element and capable of subduing the enemy, launching a myriad of ferocious counterattacks that forced the Germans to ultimately retreat. The tables were turned.

In a series of "what ifs" many historians have long deliberated about Hitler's decision to delay the attack on Moscow.  Hitler postponed the attack on Moscow against the better advice of his generals opting instead to capture Leningrad, and the oil-rich fields of the Caucasus. To have postponed the capture of the capital city, despite the opportunities, was tantamount, I believe, to virtual sabotage. (If the decision to circumvent Moscow had been ordered by a lowly commanding officer of the corps, he would have been court martialed and executed by a firing squad.)

The failure of Operation Barbarossa marked the beginning of the end for the Nazi Third Reich.  Nevertheless, for the next five years Germany would fight many more battles against the Soviet Union, and lose as many times -  the battles at Stalingrad - Kursk - Kiev - Berlin were among the most ferocious battles fought between the German and Russian forces - the Titans of WW2.  It proved that Soviet armed forces were capable, tenacious, and

The three major causes leading to the failure of Operation Barbarossa were faulty logistical planning, the weather, and underestimating the strength of Soviet troops.  But there was one other factor that proved to be as deadly - Hitler's arrogant over-confidence. The German Wehrmacht had all the resources to virtually pummel the Soviet Union into submission, but German Command made the fateful error of allocating only part of their resources to the Operation.  If all that Germany had to do was "kick in the front door" they hardly needed to take out the big cannons. 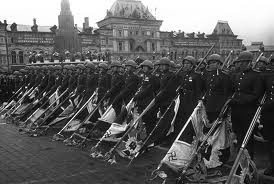 
Soviet soldiers with flags lowered of the defeated Nazi Reich

Operation Barbarossa: Clash of the Titans Index
(Please click on the following links)

Posted by Polish Greatness at 2:00 PM