"You only have to kick in the door and the whole rotten structure will come crashing down."   Adolf Hitler

Hitler's declaration was as arrogant as it was delusional. It was his fervent belief that the Soviet Union could be as easily, if not easier to conquer, than had been all of Western Europe. With the exception of the Battle of Britain, Hitler was undefeated, from Western Europe to the Balkans and North Africa.  He was now ready for a massive "showdown with Bolshevism".   Like Napoleon before him Hitler was supremely confident that he could conquer the vast expanse of the Soviet Union,  but history was about to repeat itself.  Despite early victories,  Hitler's dream was doomed to failure.

On June 22, 1941 more than 4 million troops of the Axis powers amassed along the Eastern front, spanning a distance of 2,900 km or 1,800 miles from the Baltic to the Black Sea.. Supported by over 600,000 motorized vehicles and as many horses, the German Wehrmacht was poised to begin a battle of epic proportions.  Hitler was certain that victory could be achieved easily and quickly by relying on the lightning fast blitzkrieg tactics that proved so effective during previous Campaigns.


The spearhead of the German invasion was named Operation Barbarossa, the namesake of the medieval German Holy Roman Emperor, Frederick Barbarossa. The German arsenal comprised of about 46,000 pieces of artillery,  4,300 tanks and roughly the same number of aircraft. However, only 1,939 or 68% of the Luftwaffe was operational.

Facing the Germans were over 2.9 million Russian troops - supported by 15,000 Soviet tanks and 40,000 aircraft.  Though Russian materiel was numerically superior, their equipment was woefully obsolete and hopelessly inadequate to battle the German War Machine. 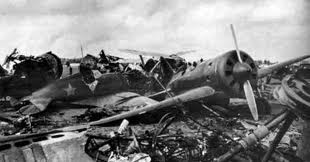 Hitler envisaged an easy invasion into the heartland of western Russia, and intended to stop just short of the Ural Mountains. He proposed that a hypothetical line, referred to as the A-A line, that would connect Arkhangelsk, located on the White Sea, all the way to Astrakhan located at the mouth of the Volga River, on the Caspian Sea.  German Command anticipated that upon reaching this imaginary line, German troops will have seized all supplies and resources therein, and easily obliterate the Red Army.  According to Hitler's plan, whatever Soviet industrial compounds remained to the east of the A-A line would then be decimated by a barrage of aerial attacks by the entire fleet of the Luftflotte.

Hitler's strategy involved a three-pronged attack at specific areas and cities. (In effect it would trace the "historical" invasion routes).  Army Group North was to invade northern Russia through the Baltics and either capture or destroy the city of Leningrad.  Army Group Center was given the mission to capture Moscow, which could only be reached by first bypassing Belarus and capturing Smolensk. And Army Group South was to invade the Ukraine, capture the city of Kiev, and seize the oil-rich fields of the Caucausus. 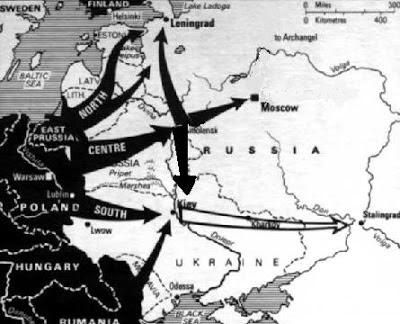 Despite considerable planning and preparation on the part of German Command, Operation Barbarossa was doomed to fail from it's very inception.  Usually known for their thoroughness in all matters, the German Wehrmacht researched the history of Napoleon's  failed attempt to conquer Russia in 1812, however they failed to heed the lessons of the past. There was considerable disagreement within the ranks of the OKW (Oberkommando der Wehrmacht), the Supreme German Command of the Armed Forces on the most effective means of achieving victory, and no consensus of opinion could be reached.  Most of the German commanders however approved of a direct attack straight through to Moscow but Hitler had other ideas.  He was adamant in the drive to first capture the Ukraine and the Baltics, for its' vast natural resources, and only then march towards Moscow.  Though Operation Barbarossa was launched with initial success,  it was subsequently mired in disaster.

Next
OPERATION BARBAROSSA: CLASH OF THE TITANS
PHASE ONE
(Please click here)

Posted by Polish Greatness at 8:00 PM