The Battle of Monte Cassino: Introduction


The Battle of Monte Cassino

was the costliest and most controversial battle of World War II. Churchill

was determined to wage this battle, refering to the Italian Campaign

as the "soft underbelly of Europe." It was anything but "soft". The Battle of Monte Cassino was regarded an act of insanity - a disaster waiting to happen.

By the end of the Battle, the Allies suffered more than 50,000 casualties as opposed to 20,000 casualties among German troops. The impenetrable mountain ranges of the Italian mainland, combined with skilled German defenses proved to be formidable obstacles indeed to the Allied multi-national forces. Despite concerted efforts, the Allies could not break through the tough German lines, and after numerous unsuccessful attempts, finally called in the 2nd Polish Corps

under the command of General Wladyslaw Anders


The Polish participation in the Battle of Monte Cassino is one of the greatest sacrifices ever made by the Polish people. It is a story of courage and honor
of the Polish Armed Forces

The Poles willingly fought for the Allied war effort and paid with their lives, knowing full well that they had been betrayed by the Big Three

At the close of the war, Churchill embarked on the laborious work of documenting World War II in an ambitious treatise, consisting of six large volumes.  In the chapter devoted to the Italian Campaign

, Churchill gave only scant mention to the Polish participation.


By his own admission, Churchill intended to rewrite history, so that his legacy might endure untarnished.
He said, "History will be kind to me, for I intend to write it."


Polish Greatness (Blog) is devoted to the memory of all the Poles who fought in World War II, especially at Monte Cassino. This special blog is a tribute to their courage and sacrifices.  Their motto, "For Your Freedom and Ours" is a testimony of their moral and ethical convictions - as soldiers and as allied friends. May God Bless Poland.

In the Battle of Monte Cassino, the Allies faced insurmountable obstacles in their mission to break down German defenses and liberate the Eternal City of Rome

. In coordinated military operations, the British, French, Americans, Indian, New Zealanders, Moroccans, and Polish Regiments converged on key German strongholds in a bitter struggle that lasted several months and cost the lives of thousands upon thousands of men.

The only two roads leading to Rome, the Via Appia (Highway7) and Via Casilina (Highway 6) were fiercely defended by a series of impregnable German fortifications running across the width of Italy, from the Garigliano River on the west coast to the Sangro on the east coast. The strongest of their defenses, the Gustav Line

, made it virtually impossible for the Allies to advance without suffering heavy casualties. The Gustav Line was erected by the Germans along the course of the Rapido, Gari, and Garogliano Rivers, behind which the Germans were solidly entrenched.Their positions were further secured by garrisons posted on every peak of the surrounding mountain ranges. 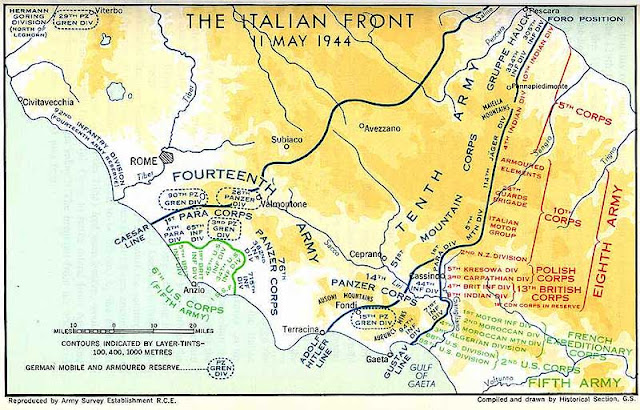 Dominating the landscape is Monte Cassino

, towering to almost 1,700m (5,500 ft), surrounded by smaller but no less imposing series of mountains. This natural terrain gave the Germans an excellent vantage point from which to observe and attack Allied positions. To obstruct the Allied advances the Germans dammed the Rapido River causing it to flood the Liri Valley. The combination of natural terrain, bad weather, forced flooding and solid German defenses all conspired to frustrate and defeat Allied efforts time and time again. It took all of six months of the most bitter of fighting for the Allies to penetrate enemy lines.

The Battle of Monte Cassino was carried out in four stages by various regiments and divisions under the banner of several nations, foremost that of Poland. The losses to men and material were staggering. It turned out to be a "see-saw"  battle where Allies, having captured key German strongholds lost it shortly thereafter to the enemy, and then succeeded in recapturing it.

It was not until the last phase of the Battle, when all other Allied efforts had failed so dismally, that the II Polish Corps, under the command of Lt. General Wladyslaw Anders was finally called into action. Their mission was to capture Monte Cassino and Piedimonte, which up until then could not be achieved by any other military units. Now everything depended on the Poles.

Next: The Battle of Monte Cassino: Phase One

Posted by Polish Greatness Blog at 12:20 AM