On the night of February 20, the 1st Battalion of the 211th Grenadier Regiment crossed the Rapido

mission to Monte Trocchio. Without a shot being fired, the Germans took all 60 men prisoner, seizing their new secret assault rifles, the MP44

. German divisions were solidly entrenched along every point on Monte Cassino, the town Cassino

on both left and right flanks, and the surrounding hills around Monastery Hill. However, the German 1st Parachute Division was considerably depleted in strength, and were spread across an area of nine miles from Cassino station to Monte Cairo. 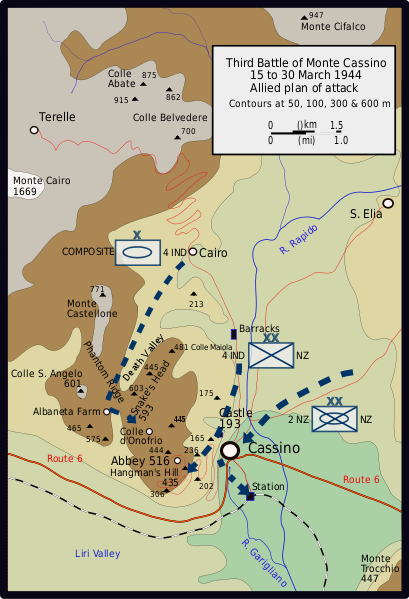 By February 21, Operations Dickens, under the command of Lt. Gen Freyberg

was geared for action, pending weather conditions.The mission was to be conducted by the New Zealand II Corps, along with two infantry divisions and a tank

division. The tactic called for a frontal assault on the town of Cassino

and of Monastery Hill, both involving an unprecedented barrage of military and air force power. What made this operation unique was that the assault would take place at only one designated point, roughly 1.5km in width (1 mile).

February 23. Operations Dickens had to be postponed due to incessant rain that lasted for three weeks. Meanwhile the German 3rd Parachute Regiment had transformed the ruins of the Monastery into a virtual fortress, launching heavy artillery fire from several positions.

ordered renewed attacks on the Anzio

beachhead. Because of the torrential rains, Germans tanks were stuck in the mud and infantrymen were trapped having sunk into the mud up to their knees. The US division

was pitched in battle at Nettuno

. But with improved weather conditions, Allied naval and aircraft could be deployed. The combined Allied support made it possible for the US 3rd Division to hold off a German offensive. The next day Kesselring called off the attack and reverted to a defensive plan to block Allied advances toward Rome.

March 10. The New Zealand II corps was ready to attack the Cassino

area, their mission made easier by a map of the town marked with the positions of German infantry

, minefields, and anti-tank weapons. By all appearances the only approach could be through a narrow path in single file.

March 11. The construction of the Cavendish Road that began on March 1 was finally completed by March 11. Built by the New Zealand engineers, it was a tank road measuring 4 m (13 feet) across and provided the Allies with access to the rear of Monastery Hill

reaching from Cairo to Massa Albaneta. The route, visible from German vantage points was securely camouflaged by columns of smoke screens. 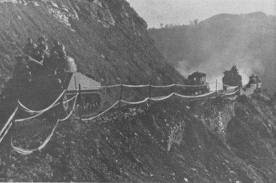 March 15. The weather had improved over the past few days and Operation Dickens rolled into action. All the top Allied military brass assembled at the Cervaro Headquarters 5 km (3 miles) from Cassino

to view the attack - the total obliteration of the town by carpet bombing. The expectation was that no one could survive an inferno of that magnitude. Logistics calculated 5 tons of explosives

were used for every German soldier in the town. Had anyone been able to survive during the bombing, they would have lost their minds.

laid the carpet of bombs covering an area of 1,500m (1 mile) wide and 500m (530 yards) deep. Bombing continued in waves of 15 minute intervals lasting for 4 hours. An armada of 575 bombers and 200 fighter bombs were dispatched from airfields in England, Italy and North Africa, to be used against 350 German paratroopers

holding out in Cassino town below. It was the strongest concentration of air force ever assembled in the Mediterranean. A German Reserve unit was actually able to survive by transferring to a cave at the base of Monastery Hill. They were the ones who later were able to drive back the Allied troops.

In the aftermath of the bombing, houses and streets no longer existed. In their place were deep craters and mountains of rubble. After the last bomb was dropped, the Allied artillery moved in using 740 guns, some of which were 24cm calibre. The New Zealand and Indian infantry

advanced with a combined force of 400 tanks from the north of the ruins toward Pt. 193 (Rocca Janula). Unaware of any survivors, the Allies

moved in confidently, but were hit with intensive fire from the 100 Germans who had escaped the carpet bombing. Tank movement came to a halt in front of enormous craters and mountains of debris. Casualties were severe as Allies fought desperately. They could do nothing without the support of the New Zealand 4th Armored Brigade. The New Zealand 25th Battalion, after hours of relentless battle finally reached the town centre and captured Rocca Janula, Pt. 193. Rocca Janula, or Castle Hill, was strategically important - it was joined to Monastery Hill by a rocky configuration. Whoever controlled Pt. 193 also controlled Monastery Hill.

unleashed a total of 195,960 shells, or 1,200 tons directly on Monastery Hill.  By midnight the Rajputana Rifles

of the Essex Battalion relieved the New Zealanders and advanced to Pt. 165, took the Monastery and pushed on to Pt. 236. There,under fierce German resistance, they lost all their officers and had to retreat to Rocca Janula. Meanwhile,the 1st Battalion of the 9th Gurkha Regiment

advanced past Pt. 236,and ascended Hangman Hill (Pt. 435). After the cessation of bombing on Monastery Hill, the Allies were astonished to spot the Gurkha Battalion positioned within 400m (440 yards) from the ruins. But enemy fire had them pinned. They could not go forward or back and were completely exposed on the bare rock.

initiated an attack on the western part of Cassino, at which the Via Casilina intersects less than 30m (35 yards) away. The New Zealanders could not advance further due to fierce German counter-attacks. Overnight German reinforcements poured in to defend Cassino

. Since the bombing, the New Zealand engineers took 36 hours to clear a tank path using bulldozers.

The 26th Battalion was then able to move in. After vicious street-fighting they captured the station. The Gurkhas were only 1,200m (1,330 yards) away.


The two units converged on Cassino like a pincer - working together to break the German resistance.

Next:  The Battle of Monte Cassino: Phase Four - Polish Army (A race against death)

Posted by Polish Greatness Blog at 12:52 AM