Weather conditions were severe as it snowed heavily in the mountains and rained continuously in the lower areas turning the valley below into a vast swampland. Thick fog hampered visibility but made it possible for both sides to launch surprise attacks. The French troops were a persistent threat to the Germans, who were in danger of being encircled by them. To counter this, the German Panzer Grenadier Division

recaptured Monte Castellone, as well as bringing up reinforcements from the Adriatic front.

on the enemy. Its effects were devastating - the Germans burned like torches. The 7th Indian Brigade, near Cairo, assisted the Allies in driving the Germans back. The enemy had recaptured Monte Castellone but had lost it once again to the Allies, in the space of a few hours. Heavy casualties were suffered on both sides. American units, exhausted and cold were replaced with a fresh contingent from the New Zealand Division under the command of Lt. General Freyberg

but the Americans were driven back in their attempt to capture Monte Cassino.

Freyberg's plan was to build a bridgehead south of Cassino

, whose expertise at close combat was legendary. But because of heavy blizzards attacks had to be suspended. Freyberg was convinced that the American failure to capture Cassino was due to German firing positions from the Abbey itself. The Americans thought otherwise - that German fire came from the surrounding slopes. Nevertheless, the next day, Freyberg carried out the planned attack, backed by military Command and obtained American air support to destroy the Abbey.

beachhead the German troops had multiplied their units, indicating an imminent counter-attack. But despite their huge numbers they unwittingly placed themselves at a disadvantage, being hemmed into a confined area without air defense. They were at the mercy of the Allies, who possessed air superiority.The key to capturing Monte Cassino was to attack from the adjacent Pt. 593. The Sussex Battalion, already posted on Pt. 593. (Mt. Calvario) believed that it was held by the Americans, when the fact was the Mt. Calvario and Rocca Janula had been recaptured by the Germans three days earlier. The Americans were holding out on the mountain slope. 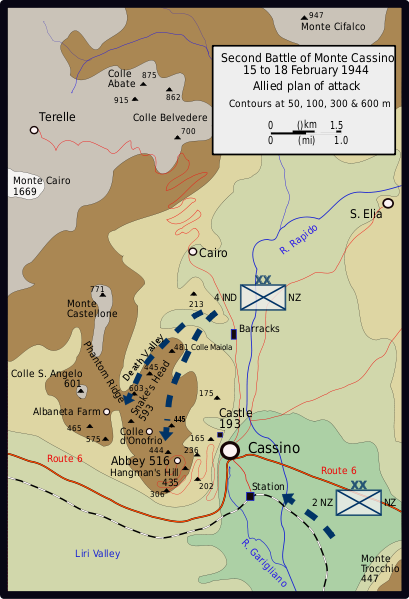 February 13. A French soldier had escaped from German captivity and found his way to the Allied front, giving valuable information of the position and logistics of German lines north and west of Monastery Hill.

February 16 was the day originally planned for an attack on the monastery but because of expected rainfall the day was brought forward to February 15. However, no one told the 4th Indian Division, who were already positioned on the slopes of Monte Calvario (Pt. 593). Meanwhile, the US 5th Army launched shells towards Monastery Hill releasing hundreds of leaflets to alert the occupants to evacuate.

were approaching Monastery Hill. Colonel Glennie, the Commander of the Royal Sussex Division remarked sharply, "They told the monks, and they told the enemy but they didn't tell us!" A total of 576 tons of explosives and incendiary bombs were dropped on the Abbey of Monte Cassino

. The Royal Sussex Division suffered heavy casualties as did hundreds of villagers who were in the town chapel for morning services when the bombs hit.

The bombs could not destroy the monastery as the thick outer walls remained intact and standing, but the area was strewn with rubble offering the Germans countless defensive positions. General Fruller criticized the American attack on the abbey as tactical stupidity. It gave the Germans a defensive advantage making the Allied job that much harder.

On Feb 16 in response to a direct order from Hitler, three German divisions converged on both sides of the road at Anzio-Nettuno. Their attack, backed by 452 guns and 270 tanks was the heaviest yet during the campaign, but the Germans could not destroy the Allied beachhead and they became instead easy targets under Allied bombs and artillery - their tanks and guns were stuck in the mud and could only advance along a few narrow roads.


February 16. With only one battalion, the 7th Indian Brigade crossed the Rapido and began its advance towards Monte Cassino. They suffered heavy casualties upon crossing a minefield and received heavy gunfire. One hundred and thirty men and 12 officers were killed or wounded - the remainder escaped and were able to regain control of the Rapido

. Reinforced by 6 more battalions, the 7th Indian Brigade made another attempt to storm Monastery Hill, Monte Calvario, and Point 404, but were caught in a crossfire and had to retreat.

captured the Cassino railway station and advanced to the southwest over the Rapido. They waited there for the Allied tanks which unfortunately had become stuck on the river banks. An engineering team preceded the Maori Battalion, clearing mines and roadblocks, and building bridgeways over the Rapido. Under cover of night, the Gurka Battalions posted on Point 450, launched an attack in the direction of Monastery Hill, but were snagged in thorn hedges laden with barbed wire and mines.


Within a few minutes, 243 men were killed by enemy fire. One battalion succeeded in reaching within 220 years northwest of the Abbey but found itself in danger of being trapped and hastily retreated. The Maoris, positioned at the train station realized that at daybreak they would be clearly visible by German positions on Monastery Hill just 550 yards away. The Allies set up a smokescreen shielding the entire area. It allowed the engineers and Maoris to dig themselves into secure positions while they waited until nightfall to commence the attack. The Germans also took advantage of the smokescreen to attack the station.

The Maoris were ill-equipped to retaliate against heavy artillery and were pursued by the Germans, pushing them back across the Rapido River to Monte Trocchio. At Anzio-Nettuno, German troops were still unable to deter Allied positions and all Allied attempts to capture Monte Cassino

Next: The Battle of Monte Cassino Phase Three

Posted by Polish Greatness Blog at 12:13 AM