"When will the help,
Which is so badly needed – weapons, ammunition
Come down from the sky?
All that remains is a circle of blood
And a ring of fire
Around Warsaw. “


This poem was written by a child and printed in today's edition of Dzieci Mokotowa, a Warsaw underground newspaper especially for the youth. The children of Warsaw have suffered the most during the Uprising. They have witnessed the horrors and experienced the hardships on a daily basis, many of them homeless and orphaned. Many are members of the Polish Scouting group which has been dubbed Gray Ranks.


Vast numbers of these children wearing the red and white armband of the AK have become active participants in the Uprising serving as couriers or messengers, distributing the underground press, trying to put out fires, and on occasion when necessary they would even participate in an attack.  Pre-adolescent boys can be seen patrolling the streets carrying pistols or hand grenades though they were not recruited by the AK to serve as combatants. Reports indicate that some homeless Jewish children have joined the Uprising. 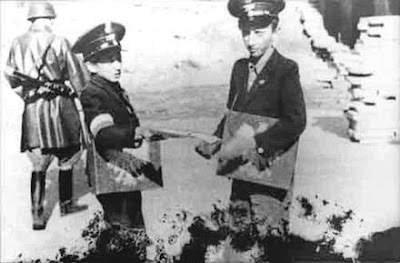 More than 4,000 women are also fighting in the ranks of the AK, serving as combatants, nurses, and couriers. Female casualties are disproportionately high. Due to the shortage of weapons, women soldiers of the AK are the last the receive any weapons, if there are any to distribute. Tragically many of these women have been killed in the line of duty but they were every bit a soldier for their courage and self-sacrifice. 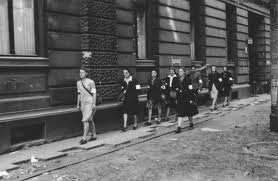 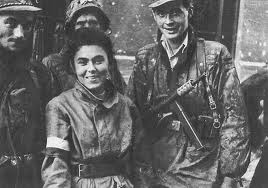 A large contingent of AK units were comprised of the women of Warsaw. Between 35,000 and 40,000 women took the Polish Soldier’s Oath to protect the Constitution. On 27 Oct 1943 the President of Poland issued a special decree proclaiming that women soldiers had the same rights and obligations as the men. The decree was amended on September 23, 1944 allocating to women military ranks including those of both non-commissioned and commissioned officers. Even before the decree was formalized Polish women were already participating in underground activities.

The Chief of Liaison and Communications of the HQ of Armia Krajowa is a Polish woman and there are numerous other women holding positions of deputy commander. They are reorganizing liaison and communications in the eastern and western territories of Poland, and are responsible for coding and decoding of messages, contacts with Polish POW camps, and medical department. Polish women have also arranged contacts with concentration camps, intelligence parties and units and plans for diversion and sabotage, for example the Women`s Sabotage Officers School, where there are over 120 women instructors. They are also watching areas that could be endangered by German surveillance, as well as guarding the clandestine meetings and radio stations, transport of money, weapons and printed material. The supervisor of the couriers exchange points is a woman, as well as chief of all insurgents magazines and storage points .

Within the AK, 35,000 women underwent military training, 5,000 in para medical training, 700 in liaison and communications, 550 in military administration, and 500 in military escort and guard.

Women messengers are in constant danger. They are constantly carrying incriminating documents, and to be caught by the Gestapo means being subjected to torture of unimaginable bestial cruelty. Many of the women carry poison and are under orders to use it without hesitation if the need arises. The AK cannot risk that any of the women, if caught, might confuse under torture, and it is impossible to free them if they are imprisoned.

In an urgent radio message to Harry Hopkins, Ambassador Harriman expressed his perceptions about the Soviet government’s “indifference to world opinion” its “unbending policy towards Poland”, and its “ruthless attitude toward the uprising in Warsaw”. Harriman said, “Time has come when we must make clear what we expect of them as the price of our good will. Unless we take issue with the present policy there is every indication the Soviet Union will become world bully wherever their interests are involved.”Harrison wanted to meet with Roosevelt but Hopkins was instrumental in preventing it.

Harry Hopkins is the closest and most influential advisor to US President Franklin Roosevelt - and unknown to his contemporaries, he is also a secret Soviet agent. He has been acting as Roosevelts unofficial emissary to Churchill. Hopkins has often met with Stalin and other top key Soviet officials and divulged many of Roosevelts' secret plans concerning the war. Hopkins was one of the major architects of the Lend Lease agreement, first with Great Britain, and then with the Soviet Union and has strongly advocated sending as much war materiel to the Soviet Union as possible, with the aim of ending the war as soon as possible. Roosevelt brought Hopkins along with him in the capacity of advisor during the Conferences at Cairo, Teheran and Casablanca.It is interesting to note that Iskhak Akhmerov, an undercover spymaster who controls the vast KGB network of Soviet agents in the United States has described Hopkins as "the most important of all Soviet wartime agents in the Unites States".

AK command believes that Red Army units which have been standing at the outskirts of Warsaw are intentionally stalling for political reasons. But according to Soviet intelligence sources, the reason is that German units of the 5th Viking SS Panzer Division, the 3rd Totenkopf SS Panzer Division, the 19th Division, and about two infantry divisions are blocking access to Warsaw. Soviet command has deployed the 47th and 70th armies, and units of the First Polish Army supported by the 16th Air Army, to combat enemy forces.
Even the enemy is cognizant of Soviet intentions towards Poland. General Heinz Guderian commented on the situation. Here is what he had to say, “....It may be assumed that the Soviet Union had no interest in seeing these elements owing allegiance to the Polish Government in exile strengthened by a successful uprising and by liberating their capital. Doubtless the Soviets wanted the credit for such actions to go to their dependent Poles in the Lublin camp.....All that concerned us was that the Russians did not then advance beyond the Vistula and we are consequently granted a short breathing spell.”  Hitlers' commanders had been observing Soviet maneuvers for the past six weeks and concluded that the Red Army had halted any advance. Apparently, they had no plans to attack German units in Warsaw for now.


General Monter dispatched an urgent message to General Bor to suggest that contact should be made with the First Polish Army, and the Polish Committee of National Liberation in Lublin with a view to extending a promise of loyal cooperation to the Commander in chief of the Polish Communist forces. The hope is that such collaboration might provide some assistance to the beleagured Polish Home Army. General Bor responded emphatically that appealing to the Commander in chief of the Polish communist forces (General Michal Rola-Zymierski) “ is in my opinion, betrayal.” A few days later General Bor delivered a speech to his soldiers ending with the statement,,”We all want good, neighbourly relations with the USSR but under...the condition that the Soviet government recognizes our right to a completely independent existence as a nation and as a state....”
German command has called for the surrender of Polish units but there has been no response from General Bor. Acting cautiously Bor has sent two of his AK officers through the Polish Red Cross to meet with General Rohr. In a meeting for Rohr, the Polish officers sole intention was to ascertain the conditions attached to such surrender. Later on this afternoon, Bor has sent a message to Rohr giving no information other than that he will issue a reply within twenty-four hours.

Meanwhile fighting continues in the northern part of Srodmiescie. German troops in the southern part and Czerniakow are escalating their attacks using artillery,heavy mortars, mine throwers and grenade launchers. The Sielce area is also under heavy attack.

Envoys of the Home Army Command Lt. Col. Franciszek Herman “Boguslawski” and Captain Alfred Korczynski “Sas”have started negotiations with Gen. Heinz Rohr, who is acting on behalf of Gen. Erich von dem Bach. The Poles raise the issue of continued evacuation of civilians from Warsaw, and evacuation of heavily wounded Polish soldiers. Also mentioned is the possibility of handing over wounded German soldiers taken captive by the insurgents.

Lt. John Ward is a British soldier and a member of the AK in Warsaw. He has been dispatching reguar reports to London authorities concerning the daily events in the battle for Warsaw. The following is today's report:

Many women, children and old men, taking the enemy at his word that they would be well treated and that any private property which they brought would not be taken from them, left the city yesterday and today. Already the staff of the Home Army has received reports that all valuables were taken from them. Afterwards women, children and old men, all weakened by hunger, were forced to march nearly 20 miles in the pelting rain. They were then driven into an open compound like so many sheep and left under a guard of S.S. men.

In the Old Town the enemy had made no attempt to give any relief to the suffering civil population. About half of these people are more or less badly wounded. All food that they had is buried under the ruins of their houses. There are between 80 and 100 thousand people still in the old town. An unconfirmed report says that all the heavily wounded soldiers of the Home Army who were left behind when the Army evacuated this quarter were shot by the Germans when they entered. 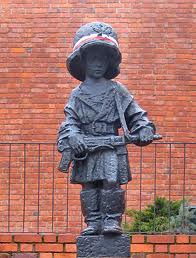