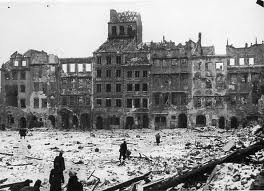 The battle for Old Town ended today. For the past eighteen days German forces launched continuous and fierce attacks on insurgents' positions in Old Town, battling street to street and even house to house. Polish forces had been able to inflict heavy damage to German positions, killing many troops and capturing a sizeable cache of weapons and tanks. It isn`t enough. Without allied assistance the Uprising had no hope of succeeding. For 33 days soldiers of the Polish Home Army (Armia Krajowa) were able to hold onto only a few blocks, all of which have been destroyed by air raids and gutted by fires. The district is now an empty shell. Graves are scattered everywhere and corpses lie rotting amid the ruins. AK defences had been dwindling day by day in the face of overwhelming German artillery. Territories gained by the Poles in the early days of the Uprising have been lost to the Germans. And with no electricity and shortage of food and water, civilians and insurgents have gone beyond what can be expected of human endurance.

Several hours ago Colonel Wachnowski had given the order for the evacuation of Old Town. One by one about 300 Polish troops and civilians began descending the sewers yesterday at about 2:30 pm while Geman troops were just 50 yards away. The last platoon retreated at 4:10 pm and reached Centre City sector a few hours later. Another 800 evacuated to Zoliborz. When the last insurgent had retreated German flamethrowers poured fire directly into the manhole.

Today Old Town is occupied by German forces - what remains of it is rubble. German troops began a rampage systematically executing the remaining civilians including patients in hospitals. In all 7,000 Poles were slaughtered. No one survived. The killing was done on the orders of von dem Bach who directed that "ethnic cleansing" be continued also in other districts along the Vistula.

In 1939 von dem Bach was SS General and two years later promoted to General of the Wafen SS. Since 1939 he has taken part in many atrocities of which he proudly boasts. On October 31, 1941 he ordered 35,000 people in Riga to be executed and later proclaimed, "There is not a Jew left in Estonia!"

Sources report a macabre event that took place today in a hospital on Dluga Street. A Polish priest, Father Rostworowski was walking through the hospital ward with tears in his eyes. He was distributing Holy Communion to each of the wounded Polish soldiers lying on the floor, and following closely behind him was SS officer Kotchke who shot each wounded soldier, one by one. When they reached the end of the hospital ward, the German officer turned to Father Rostworowski and said, "I would shoot you also but I have run out of bullets."

The first question that Kotchke asked when he took command of Old Town was "Why isn't this hospital burned?" The priest replied that there were wounded patients still there, and within the space of ten minutes Kotchke had given the order to execute them all. Father Rostworowski desperately tried to help as many patients as possible out into the street, while inside German troops were executing the remaining victims. Father Rostworowski later recalled the horrifying events:

"Some wounded started to crawl out in order to avoid execution, and I helped two of them, but Ukrainians in German uniforms grabbed these men from me and shot them. All I could hear were shots all around. They executed these wounded by shooting them in the head, and then they poured gasoline over the bodies and burned them.”

During the first week of the Uprising thousands of Polish civilians from Wola and Ochota fled to the Old Town to escape the SS troops Dirlewanger and STRONA. From 40,000 to 100,000 Poles had been slaughtered over the period of a few days. It was the worst massacre in Polish history. On the first day of August the civilian population of Old Town was approximately 150,000 but today only 7,000 had remained, many of them patients in hospitals. However the Germans claimed that the population was 35,000 among which 8,000 to 9,000 were males, and one-third lightly wounded. According to German reports, of the 35,000 they shot 1,309 people and burned 3,695.

Although there were very heavy casualties of Polish insurgents and civilians, German forces also sustained heavy losses. One source indicated that over 50% of German troops were killed as a result of actions taken by AK soldiers. But according to a German report, the average casualties in the battle for Old Town was 150 German soldiers per day.

Lt.John Ward, a British soldier and member of the Armia Krajowa has dispatched  several messages to London reporting on the desperate situation of insurgents and pleaded for their assistance.

Despite lack of ammunition and weapons the troops of AK. continue to hold all their positions intact with the exception of the Old Town. Here the enemy attacks have been so fierce, air bombing, artillery and ground fire, that it has been impossible for the Polish troops to hold on. In some places they have been forced to surrender some ruins to the enemy. There is now not a single undamaged house in the whole of the Old Town. Nothing now remains but ruins and debris among which here and there rear up fragments of walls not yet levelled to the ground. Streets no longer exist. The Old Town covered a small area and had narrow winding streets. The density of population was very high, about 100,000 people, and became still denser owing to the thousands of refugees who came from other districts. About half of this population have been wounded or killed. Practically every soldier if not killed has received a wound of some sort. The population that is still in the Old Town have sought shelter in cellars under the ruins which offer practically no protection against enemy attacks. Hence it is that these cellars often become collective graves for the hundreds who sought shelter there.


Warsaw is for the second time during the past five years fighting for its freedom. Almost exactly five years ago Warsaw was besieged by the Germans. For a month they hammered the city with heavy artillery and air bombs. In 1939 before the German invaders succeeded in taking Warsaw they destroyed 15 per cent. of buildings and damaged 75 per cent. Today it is a different story. Practically the whole city is damaged, and I think it is no exaggeration to say that 50 per cent. is completely destroyed and possibly even more. There is not a single house in the whole of Warsaw that is not damaged. There is no question of surrender in this second battle for the Polish capital. During five years of bitter occupation the people of Poland have learnt that it is better to suffer death in battle than to surrender again to Nazi brutality and murder.

I myself have been in Warsaw for over three years and can be a witness to many acts of savagery which would scarcely be credited by any civilized people. Man-hunts in the streets of Warsaw were a daily occurrence. The usual method was for S.S. troops to block a street and take all men and women between the ages of 14 and 50 years to special concentration camps. Here they were sorted-people who showed any sign of intelligence were then, sent to permanent concentration camps where mostly they died after a few months. The rest were sent to forced labour in Germany. Any people who tried to escape were shot in the street.  The situation in Warsaw is critical. The only thing that drives the population to suffer the terrible bombardment and slaughter being carried out by the enemy is the bitter memory of those five years of occupation. 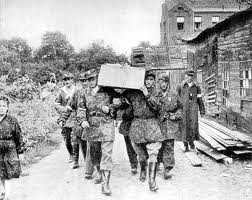 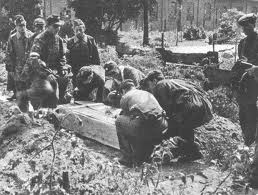 The bitter struggle for Old Town ended with terrible loss of life of civilians and insurgents. But the battle has not diminished the tenacity of AK forces. That they have lasted for 33 days has enabled Polish forces to solidify their defences and continue the fight. For as long as there is hope for an allied intervention, the fight will go on. General Bor declared emphatically, "Because of Old Town the Uprising could last for 63 days!"   Meanwhile the Government Delegate in Warsaw has sent a message to the Polish Government in exile in London in which they asked, "What does the Government intend to do, and what are we supposed to do, after one month of such a lonely fight?”

On August 30th Polish insurgents from
Old Town numbered
only 157 and among their weapons were
only 5 carbines,
2 pistols, 6 machine pistols and 18 hand grenades.