At 7:00 am this morning General Bor sent a letter to General Rohr demanding demanding written assurance that Polish insurgents, civilians and Polish authorities will receive fair treatment. By 11:00 am General Rohr had responded and agreed to provide that assurance, adding that German command expects that Bor will agree to capitulate by 4:00 pm today.


As if by clockwork, across the Vistula the Soviets suddenly began their advance and have attacked the suburb of Praga. The First Belarussian Front under the command of General Zygmunt Berling is taking part in this operation. Troops include Polish units of the 1st Tadeusz Kosciuszko Infantry Division, as well as subunits of the 1st Bohaterow Westerplatte Armored Brigade and the 13th regiment of armored artillery.

The sounds of Soviet artillery from across the Vistula can be heard throughout Warsaw and has buoyed the hopes of insurgents and civilians that allied assistance is finally underway. Apparently General Bor is stalling for time in the expectation that American forces may also intervene. At 3:00 pm Bor has sent another message to German command demanding that their agreement be delivered to him personally by the commander of the German Army Group Centre, General Reinhardt, and that it also be broadcast over German radio.

General Rohr agreed and promised to contact Reinhardt, convey the message to him and deliver his response to General Bor by 8:00 pm. Rohr stated that he expects that the Poles surrender by 10:00 pm. It was not until midnight that General Rohr finally responded. In his message he informed Polish Army headquarters that General Reinhardt approved the conditions, and that he expects Polish approval of surrender by 1:00 pm tomorrow. 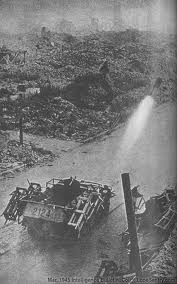 Amidst the negotiations fierce fighting continued in City Centre. The Germans have attacked the Main Post Office but have been repelled by counterattacking insurgents.  In the skies over Warsaw, Soviet and German fighter planes can be seen engaging in vicious dog-fights, while German artillery heavily pounds the neighborhoods of Jablonna and Wolomin.

In Srodmiescie fighting continues in the area of Nowy Swiat Street, Napoleon Square, and Bracka Street. Polish insurgents are fighting desperately in Chmielna, Gorskiego, Warecka and Swietokrzyska Streets to defend each and every house. The Germans succeeded in seizing a barricade in Chmielna Street and are using it to launch further attacks on the Main Post Office building.  They have also captured a house at 11 Warecka Street but insurgents managed to repel the attack. For more than a week German troops have been attacking the main riverside district of Powisle and have finally succeed in cutting of insurgents from the Vistula River.


The Soviet Govt has issued a reply to a message recently sent by the British War Cabinet.  The message read as follows:. “After a length recital of the circumstances and a statement that the really effective aid will come from the advance of the Red Army....We have dropped both weapons and food for the insurgents in Warsaw on several occasions but each time we have received information that these supplies have fallen into German hands...If you are so firmly convinced..,of the efficacy of this form of assistance, and if you insist that the Soviet Command organize jointly with the Americans and British such aid, the Soviet govt is prepared to agree to it...(but) only in accordance with a prearranged plan.”

Lt. John Ward is a British soldier, reporter and member of the Armia Krajowa. Throughout the Uprising he has been dispatching secret messages to London authorities describing the daily events and demanding assistance for the Polish insurgents. The following message is addressed to a Colonel whose identity has not been divulged.

Sir, I think that if supplies of ammunition and bandages do not reach us within 48 hours, the city will be unable to fight much longer. Sir, I am your obedient servant. During the past 24 hours I have made a tour of all the front lines and most bombed areas in the centre of Warsaw: I have seen many houses of five and six floors which have been bombed out. The people who had taken shelter in the cellars were either killed or hopelessly trapped under hundreds of tons of debris. This, of course, is not always the case. Often only one or two are blown away. I heard from one cellar, for instance, sounds of knocking. It was impossible however to do anything to help. Hundreds of tons of loose bricks lay over the entrance and the district was under heavy enemy fire. On every conceivable little piece of open ground are graves of civilians and soldiers. Worst of all, however, is the smell of rotting bodies which pervades the whole centre of the city.

Thousands of people are buried under ruins; it is at the moment impossible to evacuate them and give a normal burial. Soldiers fighting to defend their battered barricades are an awful sight. Mostly they are dirty, hungry, and ragged. There are very few who have not received some sort of wound. And on and on, through a city of ruins, suffering and dead. The morale of the soldiers is also going down in most cases.

Insurgent Polish Radio has announced on-air a list of 28 German commanders responsible for the demolition of Warsaw. Heading the list are Generals von dem Bach, Stahel and Reinefarth. The list will be printed in tomorrow's issue of "Dziennik Polski i Dziennik Zolierza” a newspaper which is published in London. It will also be broadcast by the BBC in its news bulletins in several languages. (NB. copy is not available for posting)

Jozef Szczepanski “Ziutek”  died today in Warsaw. He was a cadet officer from the Parasol battalion and fought in the Wola district in early August.  He was gravely wounded in Old Town and was evacuated through the sewers to City Centre sector. Jozef was the beloved author of the famous song “Palacyk Michla” The lyrics were first published on August 17th in the Old Town newspaper and became instantly popular throughout Warsaw. Please click on Palacyk Michla, to listen (from Polish Greatness.com website) ﻿