Polish Insurgents have been waiting for the First Polish Army to make a landing and have fled burning buildings to take positions in the trenches along the banks of the Vistula. They are waiting, but the declared aid has not arrived.

General Monter has sent a radio message to the commanding officer of Zoliborz Sector ordering the him to expand and fortify his territory.  Though Polish Command had pleaded for weeks for Russian assistance, the Polish strategy is now to invite Soviet commanders to come to them, rather than vice versa. It is a decision that is widely supported by Polish political leaders in Warsaw as well as by the Delegatura.

Polish civilian and military authorities have assembled in the Centre City Sector. The Deputy Prime Minister, the Delegatura are making preparations to welcome the Red Army.  Polish troops of the Armia Krajowa will be concentrated in the same region to provide security in the event of any hostile activities or provocation. The Government Delegate of the city of Warsaw will direct the civilian administration for the interim.  Briefings among civilians and military personal are underway to establish an attitude of friendliness and willingness to cooperate with the Red Army, on the condition however, that Polish authorities are respected.

The AK have been wiped out by the German forces.  Throughout the onslaught, Russian spies had infiltrated Warsaw. During the month of September there were a total of five Red Army shortwave stations operating inside Warsaw reporting everything to Soviet Headquarters. Since the beginning of the Uprising, a Russian officer by the name of Captain Kalugin had linked up with AK command in Warsaw, and throughout the Uprising Kalugin was sending messages to Stalin through the AK short-wave stations. One of those messages from early August has been translated and contains a request for Soviet assistance in key areas of Warsaw. 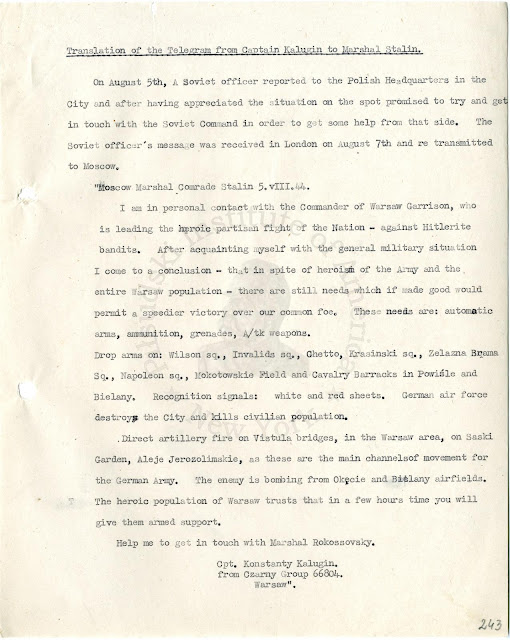 Soviet reconnaissance planes have been spotted flying over the fires of Warsaw while the Polish Communists have infiltrated the city, intermingling with civilians and the AK. The communists secretly gathered information and gauged conditions in Warsaw as well as the general morale of the civilians and secretly dispatched their reports through messengers and other means to the Soviet-backed "Lublin Committee", in other words, they went directly to Stalin.

German Command proposed surrender to Czerniakow Sector but the insurgents declined. The battle continues. The Germans blew up the remaining pumping stations at Koszykowa Street as well as the public wells, which were the only source of potable water in the city. Enemy forces have exerted continuous pressure on the Czerniakow beachhead.

Polish troops under the command of Captain Ryszard Bialous “Jerzy” linked with soldiers from the First Polish Army under the command of Major Stanislaw Latyszonek, now hold control of only a patch of the riverbank and two houses located at 53 Solec Street and at 1 Wilanowska Street on the corner of Solec Street. Srodmiescie is being pounded continuously by heavy artillery fire. Meanwhile insurgents have managed to destroy an enemy barricade on the corner of Aleje Jerozolimskie and Bracka Street. In the western part of Srodmiescie, they were able to fight off a German attack on Borman’s factory on Towarowa Street.

Captain Bialous had fought in defense of Warsaw during the September Campaign of 1939. He was a platoon commander in the 8th Battalion of Sappers Infantry Division. He was seriously wounded in both legs and was hospitalised for four months.  After he was discharged from the hospital he founded the organisation of the famous Grey Ranks. By 1943 he became head of the organization and was known by the code-name Zygmunt. During the Uprising he has been commander of the battalion "Sophy". On August 31st after the death of John Caius Andrzejewski, Bialous became commander of the brigade diversion "Broda 53" in the Radoslaw regiment of the Armia Krajowa. By the end of the Uprising, the "Sophy" Battalion will have lost over 360 soldiers,(KIA, MIA) or 70% of its fighting force. Bialous was promoted three times: in January 1941, Lieutenant reserves; May 1943, Lieutenant; and September 1944, Captain.  He was decorated with the Cross of Valour three times and the Order of the Virtuti Militari V Class.


In Zoliborz, a German assault on Kepa Potocka has stopped the landing of the 6th Infantry Regiment. Survivors managed to cross over to the right bank of the Vistula. Unaware of that, insurgent troops, unaware of their presence, attack Marymont at dawn. They reached Promyka Street and waited for soldiers of the 6th infantry regiment, who were supposed to break through from across the river. Realizing their isolation, Home Army soldiers retreated destroying the fortifications of the German positions they had managed to seize.


"This is the fiercest of our battles since the start of the war. It compares to the street battles of Stalingrad."
SS chief Heinrich Himmler to German generals on 21 September 1944

Flight conditions to Warsaw were extremely hazardous and every plane that returned had been hit. Even parachutes inside the planes were riddled by German bullets or explosives.

Lt. John Ward is a British soldier and member of the Armia Krajowa.  From the very outset of the Uprising, Ward has been dispatching secret coded messages to London detailing the events in Warsaw.  He is also the "voice" of an Underground Polish radio station, transmitting regular reports to Polish civilians around Warsaw.

Warsaw headquarters of the Polish Home Army have established direct contact with the Soviet forces on the east bank of the Vistula. Liaison is carried out by two wireless operators who landed in Warsaw by parachute on the area occupied by Polish troops.