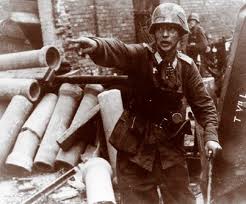 German troops have systematically blown up several bridges in Warsaw: at noon it was the Poniatowski Bridge - by evening, the railway bridges near the Citadel and just before midnight the Kierbedz Bridge was completely demolished.  Throughout the day German troops launched continuous attacks on Czerniakow while German air raids and artillery went about destroying all the larger buildings. One by one the Germans have eliminated points of Polish resistance in the area of Czerniakowski Port and on Lazienkowska Street. Enemy fire was so overwhelming that insurgent troops were forced to leave the port.  Polish units also had to retreat from the even-numbered side of Lazienkowska Street. Meanwhile enemy units have taken over the gasworks premises in Ludna Street and have seized the ZUS building on Czerniakowska Street. After a fierce 24-hour battle, the Germans seized the buildings of St. Lazarus Hospital on Ksiazeca Street.  The insurgents attempted to launch a counterattack to recapture the entry of Ksiazeca Street in Trzech Krzyzy Square and restore communication between Srodmiescie and Czerniakow but failed.

Armia Krajowa Headquarters dispatched a messenger to cross the Vistula during the night and attempt to establish contact with Berling's army staff.  The Soviet offensive resumed today and Russian troops have smashed their way through to Praga, a suburb of Warsaw. During the night the Soviet airforce has made its first supply drops over Warsaw for the Polish fighters.  Rokossovsky later remarked that "This is when the Uprising in the Polish capital should have started.  A joint strike by the Soviet Army from the east and the insurgents from Warsaw, taking the bridges, could have succeeded in liberating and holding Warsaw, though, even in the most favourable circumstances that would have been just about all the Front's troops could do."


Concerned about the arrival of Russian troops into Warsaw, General Bor sent detailed instructions to General Monter on the recommended behaviour by the Polish units.  Monter has been ordered to hold the regions in Polish hands, but to clear the main routes through Warsaw so that the Red Army could pursue the Germans, In addition, there has been an order for all AK partisans currently outside Warsaw, to come to the city.  Territories that are still held by the insurgents have been clearly identified by Polish flags.  Attached to Bors' instructions was a note entitled, "How to Parley with the Red Army".  General Monter has immediately issued Special Order number 83, calling for the seizure of as much of Warsaw as possible.

Lt. John Ward is a British soldier and member of Armia Krajowa has been reporting on the Uprising through regular secret messages dispatched to London.  Ward has been giving a rare glimpse into the daily struggles and horrors experienced by Polish civilians and insurgents.  Today's report, albeit brief, tells of the sort of brutality waged by German forces against Polish insurgents. Polish Home Army men who had captured a house from the Germans on Zulinski Street found some food supplies left behind by the enemy. Five of the men were so famished that they at once ate part of the food. It was poisoned with strychnine and three of them have died; the other two are in a serious state.