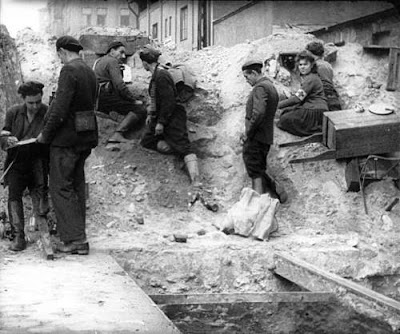 At 1:30 pm today General Tadeusz Komorowski “Bor” broke off negotiations with the Germans. Bor has been able to persuade the Polish Council of Ministers with arguments supporting his decision.
He strongly believes that the Allies and the Russians are now collaborating in defense of Warsaw and indicated that US flights will soon make their way to Warsaw with supplies. It is apparent that the Soviet army is fighting the Germans for access to the Vistula as sounds of artillery fire can be heard north and east of Warsaw.


Morale of the insurgents has greatly improved and the Poles are ecstatic that the Soviets and their allies are finally coming to the defence of Warsaw. Surrender now is out of the question. Over 50 percent of the insurgents would be against the option of surrender. General Monter, General Pelczynski and Colonel Szostak are all in agreement with the decision to keep on fighting. Capitulation should not take place. To do so now would be, as Monter said, "the depths of tragedy."


Developments on the right bank of the Vistula prompt the Germans to cut the insurgents off from the river. They have attacked Czerniakow from a pumping station on Czerniakowska Street and from Sobieski Park. Polish troops have retreated from a section of Rozbrat Street between Lazienkowska and Przemysłowa Streets. Przemysłowa Street, the corner of Czerniakowska and Lazienkowska Streets, as well as the Czerniakowski Port remain in insurgent hands. The Poles have succeeded in fighting off an attack from an escarpment that covers a passage from Czerniakow to Srodmiescie. German planes have bombed the Heavenly Mother of Czestochowa Church on Lazienkowska Street. Damage is extensive and several dozen civilians are buried under the ruins. AK units have been forced to abandon their most advanced outposts. Attacks halted on Ksiazeca Street – the only connection between Czerniakow and City Centre. German offensive in the remaining districts are declining.

Gen. Tadeusz Komorowski “Bor” has sent an urgent cable to Soviet Marshal Konstanty Rokossovsky asking him to establish direct radio communication, but no reply has yet been received.  Rokossovsky is praised by the Soviet government as being a "true Pole",  "great Pole", and "speaker of two nations'. Despite the political rhetoric, Rokossovsky is widely hated by the Polish people. Though his origins are of Polish nobility, Poles mock him for being "a Russian dressed in Polish uniform" and for "acting Pole".  Enemy forces are making determined efforts to cut off communication between the northern and southern parts of the city, as divided by Sikorski Avenue. Despite overwhelming German fire power, Polish insurgents have inflicted severe losses on the enemy. During the past 24 hours, the Germans have suffered a loss of nine tanks, seven of which were destroyed by the Poles in Sikorski Avenue. The battle has gone on unabated day and night. Huge fires are burning everywhere and none can be extinguished. There is little water available to put them out. Over 50 per cent of civilians from the northern part of the city have been evacuated to the southern zone and now the southern part of the city. The southern part is much smaller in area and is overcrowded. More than 300,000 refugees are under constant and heavy bombardment and artillery fire. Casualties are very high.

Lt. John Ward is a British soldier, and member of the Armia Krajowa. Since the early days of the Uprising he has been sending secret radio messages to London authorities reporting on the daily events in Warsaw. Apparently allied airplanes have made an air drop of supplies for the Polish insurgents, unfortunately most containers have ended up in enemy hands. In few words, Ward's message stated: Addressed to Colonel P… Sir, last night a small number of containers were dropped on Warsaw at widely scattered points. As far as I have been able to check, five were found of which three contained surgical supplies. Have not found out contents of other two.