The Battle of Monte Cassino: The Aftermath

Fighting continued at Anzio beachhead. German 14th Army began its retreat as troops from the 8th Army advanced towards the Liri Valley, and the 5th Army made its way along the coast towards the Hitler Line. (Apparently, Hitler renamed it the Senger Line, in the event that German defenses would be breached.) However, an Allied assault failed and it took several days to reorganize troops and logistics.

Polish troops captured Piedimonte, and broke through the "Senger Line". Allied troops captured Cisterna. The US 5th Army, having broken the barrier enclosing the beachhead, began their advance towards Valmontone, and at the same time were poised to cut off and capture the German 10th Army. But quite unexpectedly, Allied orders arrived with instructions to change direction and instead head directly towards Rome.


June 4
As the US 88th Division was entering Rome, the last German units had evacuated with putting up a fight.


July 18  The II Polish Corps captured Ancona.
The Allies plan was to capture the city of Ancona in order to gain control of the seaport and the mission was given to the II Polish Corps. Polish troops reached the Chienti River on June 21 and engaged in heavy fighting until June 30th.  The main offensive towards Ancona began on July 17th.  Polish troops took Monte della Crescia, then Casenuove, while British troops took Montecchio and Croce di San Vincenzo. By nightfall, Polish troops were already near Agugliano, and by daybreak took Offagna, then Chiaravalle.  Polish armored troops having reached the sea coast succeeded in cutting German troops from the northwest, forcing the Germans to fall back towards the sea.   On July 18 at 14:30, Polish troops met with minimal resistance as they entered Ancona.  Following the liberation of Ancona, the Polish Corps took part in breaking through the Gothic Line, and the 1945 spring offensive which brought about the surrender of Axis forces in Italy.

The Battle of Bologna began on April 9th, 1945 with massive Allied attack on German positions.  While American and British troops were targeting German flanks, the Polish troops were able to break into the city. The next day, the Poles succeeded in forcing the Germans away from the Senio River.
On April 12 Polish soldiers fought at the Santerno River and by April 14 captured Imola.  For the next two days the Poles fought at Sillaro River and Medicina Canal.  The Poles continued to push towards Bologna from the east.  On April 20 the 3rd Carpathian Rifle Brigade of the Polish 3rd Carpathian Infantry Division entered Bologna and by 06:15 were able to secure the city.  The Polish flag was raised from the town hall and from the Torre Asinelli. 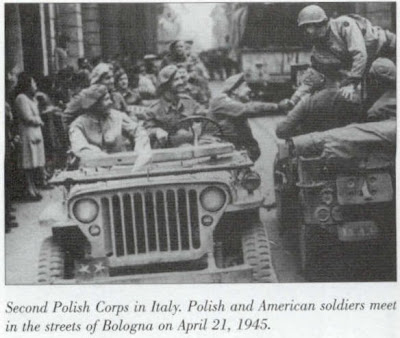 The following was the speech given by General Alexander,Commander-in-Chief of the Allied Armies in Italy to the Polish Corps after the victory at Monte Cassino Decorating General Wladyslaw Anders with the Order of the Bath in front of the 2nd Corpus troops:


"In the name of His Majesty George VI, King of Great Britain, I confer on you the Order of the Bath....By conferring on General Anders the Order of the Bath, my Sovereign has decorated the Commander of the II Army Corps for his excellent leadership, and also by it expressed his appreciation for the extreme gallantry and great spirit of self-sacrifice shown by the Polish soldiers during the Battle of Monte Cassino. It was a day of great glory for Poland, when you took this stronghold the Germans themselves considered to be impregnable; It was the first state of a major battle that you went through for the European fortress. It is not merely a brilliant beginning: it is a signpost showing the way to the future. Today I can sincerely and frankly tell you that, Soldiers of the II Polish Corps, if it had been given to me to choose the soldiers I would like to command, I would have chosen the Poles. I pay my tribute to you."


The following speech was by President Roosevelt after the Battle for Ancona was won by the Polish troops;


"Wladyslaw Anders, Lieutenant General, Polish Army, for exceptionally meritorious conduct in the performance of outstanding services to the United States and the Allied Nations in Italy from October 1943 to July 1944. As Commanding General of the Second Polish Corps, General Anders brilliantly led his men in the final overwhelming drive that resulted in the retreat of the German Army from the strongly defended Cassino. This point of stubborn resistance was captured when General Anders guided his troops in a coordinated and inspired Allied drive into the bitterly contested vantage point of the enemy. Later, continuing in the eastern sector of Italy on the Adriatic coast, General Anders again led his men in the capture of the important port of Ancona. The outstanding leadership and tactical ability displayed by General Anders were primary contributions to the success of Allied Forces in the Italian Campaign."

General Anders' Order of the Day for July 6, 1945, was written just after the British and US Governments had given their recognition to the Soviet-backed Polish government in Warsaw, and retracted recognition from the legal Polish government-in-exile in London. The speech which follows is a bitter verbal attack on the policy of the Allies and expressed the Polish feeling that the sacrifice they had made in the war must not be allowed to go in vain. 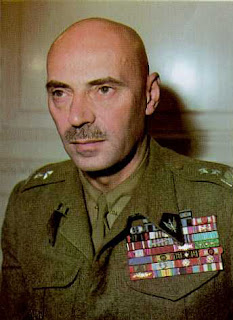 "Men, I am turning to you at a period of extreme difficulty and of far-reaching importance. The Governments of the Western Powers have decided to recognise the so-called Provisional Government of National Unity imposed on Poland by her occupation and thus to withdraw recognition from the legal Government of the Polish Republic in London. The World Powers by-pass our constitution and our lawful authorities, and in accepting the present circumstances, they have agreed to the fait accompli created with regard to Poland and the Poles by a foreign force.


Men, at this moment we are the only part of the Polish Nation which is able, and has the duty, loudly to voice its will, and just for this reason we must prove today by word and by deed that we are faithful to our oath of allegiance, true to our citizen's duty towards our country, and faithful to the last wish of our fallen comrades in arms, who fought and died for an independent, sovereign and truly free Poland....


Our country, deprived of the rights of speech, looks towards us. It wishes to see us in the land of our ancestors - to that end we are striving and longing from the bottom of our hearts - but it does not want to see us as slaves of a foreign force; It wants to see us with our banners flying as forerunners of true freedom.

As such a return is impossible today we must wait in closed and disciplined ranks for a favourable change of conditions. This change must come, or otherwise all the terrible and bloody sacrifices of the whole world, suffered throughout six years, will have been in vain. It is impossible to imagine that humanity has suddenly become blind and has really lost the consciousness of a mortal danger....

We will fulfill our duty towards our country and its lawful authorities!


Next: Message from Pope John Paul II
on the 50th Anniversary of the Battle of Monte Cassino

Posted by Polish Greatness Blog at 2:57 AM