Never before in the history of modern warfare has there been a battle of such magnitude in which the enemies were so unevenly matched. The Germans have been dispatching bombers, self-propelled artillery, railway motors, tanks, armoured trains, and even armoured light boats in an effort to quash the Uprising.  The superiority of numbers and quality of German infantry is evident. Yet despite these overwhelming odds, Polish insurgents have been able to withstand the German onslaught for weeks sustaining indefinitely this horrendous blood-letting. After three weeks of ferocious battles, only 20 percent remain of the original number of insurgents. There are reports which indicate that some units have lost more than 100 men as a result of German bombing. Of the 106 men of the Gieowont Company, only 4 to 6 survived a recent air raid. The German war machine has thrown all its power into the fight for Warsaw but though they are invincible they too have suffered heavy casualties.

Polish insurgents from Kampinos Group and Zoliborz units on Gdanski Station have been fighting bitterly and succeeded today in repelling ferocious attack from a German armoured train. Casualties were very heavy on both sides.  Meanwhile in the Old Town, grenadiers from the 5th SS Armored Division Viking have attacked barricades set up around the Royal Castle. Fighting has shifted to St. John's Cathedral which is currently in Polish hands. Throughout the day German airplanes have been passing overhead every 40 to 50 minutes. They are flying low and dropping bombs at random, some weighing over a thousand pounds each. Sources indicate that several  bombs that did not explode have been salvaged by AK engineers who will defuse them and use the explosives to produce home-made hand grenades. 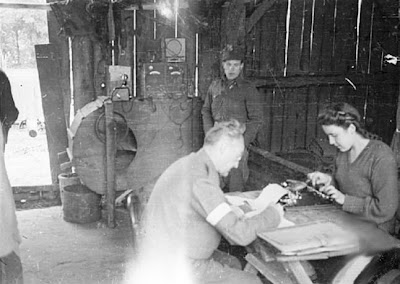 courier Jadwiga Balabuszko-Stawinska "Hanka",  Radio equipment is by the wall. 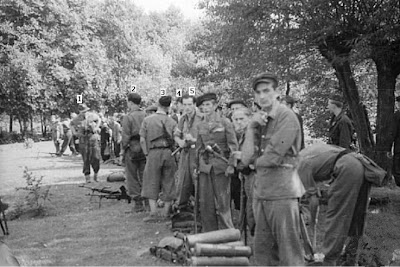 
The Old Town is still in the possession of the insurgents. Of the 1,100 apartment houses in this historic district of Warsaw half the buildings are in ruins and 300 buildings completely gutted by fires. New fires have broken out in the district. The Arsenal building on the corner of Nalewki and Dluga Streets is on fire.  Polish troops have evacuated the area but only one company from the "Chrobry I" battalion still remains in the building. The insurgents have managed to push the Germans from the right wing of the Bank Polski on Bielanska Street and from the Canonesses Convent, and are fighting back enemy attacks on City Hall and Blank's Palace.

The Arsenal was constructed by the order of King Stefan Batory in the mid-16th century. Initially the building served as a hostel for Polands' war veterans. Between 1638 and 1643 during the reign of King Wladyslaw IV, the building was reconstructed by General of Engineers Pawel Grodzicki to accomodate the requirements of a city arsenal. The walls of the structure were substantially thickened as protection against direct attacks, and its exterior appearance was classical in design. The Warsaw building has remained as the main armoury ever since.  However, during the 18th century it had to be rebuilt twice: the first time between 1752 and 1754 by Jan Deybel and Joachim Rauch, followed by a second reconstruction between 1779 and 1782, undertaken by Polands most renown architects of the era, Szymon Zug and Stanislaw Zawadzki.

The Arsenal was the scene of heaving fighting during the Warsaw Insurrection of 1794 between the Polish Army and civilians against Russian forces which had occupied Warsaw.  Due to extensive damage to the building it was rebuild in 1817 under the leadership of Wilhelm Minter. Following the November Uprising until 1835 the arsenal was expanded to become a tsarist prison.  Eventually Russian authorities built a huge citadel  and it was converted for the detention of common criminals.  After Poland regained her independence the Arsenal was used as a police precinct. During the interwar years (1935-1938) the building was used to house the city archives. At this time, the main architects Bruno Zborowski and Andrzej Wegrzecki restored its exterior to the original 17th century design.

The building survived the Invasion of Poland in 1939 and continues to function in its pre-war role during the German occupation. In one of the most spectacular actions by the Polish Resistance, in the spring of 1943, the Szare Szeregi fighters liberated a vast number of political prisoners from the Gestapo as they were en route from one prison to another.


Insurgents have made another attempt to break out of the Old Town Sector but have failed. Polish fighters had also tried on August 10 but with no success. The situation is desperate yet they continue to fight. After three weeks of battling German forces, about 50 to 80 percent of Polish fighters have been killed or severely wounded.  Field hospitals have run out of supplies and medicines and operations and amputations are being performed without the use of anesthetics. Every day the death toll rises and freshly dug graves line the streets. The dead now lay in the streets and the stench of rotting corpses and burning homes is overwhelming. German attacks are focused towards Krasinski Square and from their positions at Royal Castle they are mounting ferocious attacks on Swietojanska and Kanonia Streets. The battle for the Cathedral continues while insurgents desperately hold on to their positions.

Since this morning in Srodmiescie North the Germans have been shelling positions of the “Chrobry II” group.  Meanwhile SS RONA units are attacking from Aleje Jerozolimskie and Towarowa Streets but by 5 p.m., the attack collapsed. Last night insurgent troops from the Zoliborz District and Kampinos under the command of Maj. Alfons Kotowski "Okon" attacked the Gdanski Railway Station. The attack failed under strong enemy fire and prevented the Poles from linking Old Town with Zoliborz. Polish casualties were severe.

Germans units have blown up Pawiak Prison. Meanwhile another German unit has launched an attack on Sadyba from Wilnow which the Polish troops managed to repel. Their main defensive position is the neighborhood of the Dabrowski Fort on Okrezna Street. Despite the fierce fighting in Warsaw, the Palladium Movie Theater screened the second insurgent newsreel of yesterday's incredible victory - the Polish taking of the PAST building. It is the greatest Polish victory since the Uprising started and raises hopes among Warsaw civilians and insurgents that victory will soon be theirs. The Polish Delegate sent an urgent message to the office of Prime Minister Mikolajczyk to be forwarded to Roosevelt and to Churchill. Here is an excerpt:

“Gentlemen, we are approaching you for the second time. For the past three weeks, we have been carrying on a bloody fight completely alone, insufficiently supplied with weapons and ammunition, and without air assistance. At the same time, all reports that reach us from Polish territory occupied by the Soviets, from territories that are disputed by the Soviet Union and those that are not, inform us that the Soviet authorities intern, arrest, or detain in Camp Majdanek, Armia Krajowa civilian administrators. This is the AK that so successfully assisted them in fighting the German forces. In this way, after five years of incessant and bloody resistance against the Germans, the Polish nation is being cruelly enslaved by one of its allies. Is it true that the great nations of the United States of America, and Great Britain can passively watch this new tragedy overtaking Poland...their ally? Is it true that even the Polish Air Force under British command is not allowed to come to the assistance of dying Warsaw? Is it true that Poland is going to be a victim of partition based on spheres of interest? We are declaring in the most solemn manner that we are fighting on the ruins of burning Warsaw, and we shall fight...for independence, and...defend that independence against any sort of imperialist. In this fight we have united peasants, workers, and intelligentsia. The Polish nation, seeing the passivity of both great allies toward dying Warsaw, and also their silent approval of the outrages committed under the Soviet occupation, cannot understand and is reacting with bitter disappointment."

Signed: the Delegate of the Polish Government