Polish fighters are struggling to defend individual districts but each one has been cut off from the other by German positions. A major German offensive is underway in the Old Town Sector resulting in widespread destruction and very heavy Polish casualties. Germans have demolished small tenement houses and have set fire to numerous buildings as well as to St. John's Cathedral, the Church of the Visitation of the Virgin Mary in the New Town, and City Hall in Teatralny Square. Bombing raids continue on the Old Town's Market Square as well as Miodowa, Kapucyńska and Hipoteczna Streets. The State Securities Plant building on Sanguszhi Street has been under very heavy artillery fire.

During the afternoon German infantry units attacked the streetcar depot in Muranow from the Gdanski Railway Station and Traugutt Fortress. Defending the depot are Polish troops under the command of Lt. Col. Jan Szypowski “Lesnik” and members of the “Czata 49” battalion. They succeeded in repelling enemy attacks. Meanwhile German troops launched attacks from Saski Gardens towards Krolewska and Marszalkowska Streets. By 9:00 pm the insurgents received reinforcements and were able to push the Germans back to their initial positions. Meanwhile on Leszno Street German forces attacked a barricade using a group of women as cover but the insurgents managed to hold back the enemy. 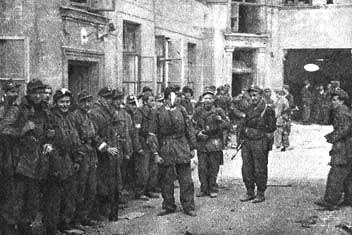 Skirmishes have broken out in southern Srodmiescie between Polna Street, the Institute of Technology, and Wspolna Street. The Germans have made another attempt at seizing northern Srodmiescie. They attacked from Towarowa Street and from the north, along Zelazna, Walicow, Ciepla, Rynkowa and Graniczna Streets. From the south, the area of Starynkiewicza Square and the Freight Railway Station, they shelled the Railway Hostel and the Postal Railway Station. The insurgents successfully fought back enemy attacks. The Germans manage to seize the Police Barracks on Ciepla Street and food warehouses of the “Pluton” Company on Grzybowska Street. Meanwhile in Zoliborz the insurgents fight back an attack from the Institute of Chemistry towards Henkla Square but suffer have severed casualties.


In Mokotow, on the orders of Col Antoni Chrusciel "Monter", Lt. Col Stanislaw Kaminski "Daniel" has taken up position in the area of Siecle and Sadyba and are prepared to take action jointly with insurgents fighting to get into Warsaw from the Chojnowskie Forest. 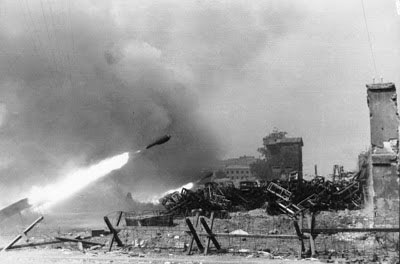 Ambassador Harriman has sent two top secret radio messages jointly to the President and the Secretary of State in which he took a firm stand on Soviet attitude toward the Uprising. The President authorized Harriman to urge the Soviet government to reconsider its proposal to air drop supplies to the Polish Underground via shuttle bombing arrangements. But after a three hour meeting with Molotov, Harriman was unable to persuade the Soviets to change their position.

Soviet objections to this proposal is unfounded. In June 1944 the Soviet government had permitted the Americans to land its bombers - 200 and 184 planes respectively on Soviet bases at Poltava. The US 8th and 15th Air Forces had received permission for shuttle bombing missions during the Operation Frantic. It was a new bombing strategy created in November 1943 at the Tehran Conference. The Allied leaders including Stalin came to the agreement that American heavy bombers stationed in Great Britain and Italy would fly strike mission deep into the heart of Nazi-occupied territory, landing on secret air bases located inside Soviet Russia. This would permit them to easily re-arm and re-fuel. Irregardless, the Soviet government refuses to reconsider. 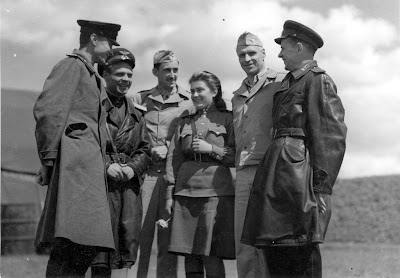 Russian officers chat with Col. Barton C.O of the 483rd B.G and Col. Rice of the 2nd at Mirgorod.

Woman in center is interpreter 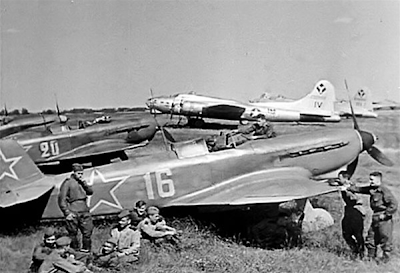