The Uprising is now in its third week and the Old Town continues to be barraged by enemy fire power, artillery power, and bombing raids.  All sectors are being hit hard by the German forces - the western sector from Długa Street and Krasińnki Square and the eastern zone from Wybrzeze Gdanskie through Bolesc towards Koscielna and Dluga Streets, accompanied by pressure from the south and north. German units have infiltrated Bielanska Street from Tlomackie Street and have captured the northern part of the Bank Polski. After a ferocious battle, the Germans also seized Mostowski Palace. Late this evening insurgents were forced to retreat from their positions and have moved to the State Securities Plant building on Sanguszki Street and its environs. German attacks on the Old Town from Muranow have intensified and they managed to bring the entire area under their control between Nalewki and Bonifraterska Streets. Insurgents of the “Chrobry II” group have taken up positions in Hartwig’s warehouses on the corner of Towarowa and Panska Streets, and is their farthest outpost to the north in the area. Seven hundred and fifty men of the AK unit commanded by Major Okan reached Zoliborz sector today. The Major then returned to Kampinos forest to organize another unit of 2,368 soldiers but they never reached Warsaw. About 45 percent of the men were killed in combat with German army units and while desperately trying to retreat into the mountains - the entire Polish unit was destroyed.  About 200 AK units reached Mokotow Sector. One of the units had successfully fought more than a hundred engagements on its way to Warsaw but once within sight of the city, they were unable to get through.


Last night in Srodmiescie, insurgent troops under the command of Cavalry Captain Henryk Roycewicz "Leliwa" launched an attack on Warsaw huge nine-story building, the Polish Telephone Company, named PAST (Polska Akcyuna Spolka Telefoniczna) located at 37-39 Zielna Street. Among the troops of Captain "Leliwa" were a shock platoon of "Koszta" Company, two engineer patrols, a women's sapper patrol, two flamethrower patrols, and a special fire brigade. Previous attempts to take the PAST building had failed resulting in very heavy losses to Polish troops. Despite the superior firepower of the Germans and their fortified positions, the insurgents fought on for over 12 hours. The Poles succeeded in capturing the PAST building killing 38 enemy soldiers and taking over 115 prisoners. The insurgents also captured a considerable cache of weapons and ammunition. 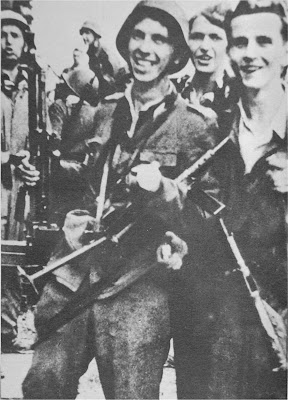 Insurgents from "Kiliński" battalion after capture of "PAST" building.
Standing with machine gun Edward Mortko "Tumry", next on the right - Bernard Zieliński "Połabski",
behind - on the left Zbigniew Maliński "Sławicz", on the right - Kazimierz Zagórski "Barbara".

In one of the Polish underground newspapers, an appeal was published asking the civilian population of ‘Warsaw for help in saving the children and providing milk for them. Throughout the Uprising, casualties among Polish insurgents and civilians have been heavy, but the consequences for young children and infants have been alarming. The headlines read,”What to Save First! The babies! Infants must have milk...Save the infants, our Polish Warsaw infants...we shall rebuild our buildings but the lost generation we will not be able to rebuild!” At a meeting of the British War Cabinet, Foreign Secretary Anthony Eden commented on the request of the Polish Underground for official recognition as a fighting force. His Majesty’s Government finally made the concession of conferring such recognition provided that the phrase “belligerent status” not be used in any context in an effort to avoid appearing “anti-Russian” in character.

Lt. John Ward, a British soldier, and member of the AK has dispatched messages again today to London reporting on the days events in Warsaw. The message reads as follows:


Thousands of people are each day rendered homeless in Warsaw and hundreds killed. The German forces make no difference between civilians and troops of the Home Army. Ruthless destruction of property goes on unhindered by any scruples. There are thousands of civilian wounded men, women and children suffering from the most horrible burns and in some cases from shrapnel and bullet wounds. Each day the martyrdom of the battle of Warsaw is prolonged the cost mounts higher. But the determination of the population to fight to the last man is only strengthened by this German barbarism. On practically every open piece of ground in Warsaw wells are being dug. The shortage of water is starting to be serious. If in ten days the city receives no relief then the goodwill will also give out. Rations are already very short. It is no exaggeration to say that the situation in Warsaw is desperate. On the outskirts of the city are huge concentration camps full of women and children living in the open air without food or help of any kind. They are dying of hunger and disease under the most terrible conditions. The Germans show no mercy to these helpless people. They have no men to look after them. The men were shot when the women and children were taken prisoner. The Germans have, in many areas, gone over from the defensive to the attack. The high school of Snakeskin Street was taken by Germans at 5.00 hours on the 19th August. The attack was carried out by a heavy artillery barrage and supported by tanks. The lack of ammunition and weapons is being heavily felt by the Polish forces. Despite these drawbacks, however, the troops of the Home Army continue to fight with magnificent courage. Other attacks in Sikorski Avenue were firmly held.

A joint radio message was sent to Stalin by Roosevelt and Churchill urging Soviet approval of American and British assistance to Polish insurgents. Efforts are still being made by Allies to provide supplies and munitions in Warsaw, and save as many patriots as possible. But as yet, nothing is getting through.