German forces have launched a brutal attack against a unit of Armia Ludowa (The Polish Communist underground army) killing all 150 members. The Armia Ludowa was the same unit responsible for having liberated 324 men and 24 women from a German camp located in the Old Town district of Warsaw. Eighty-nine were Polish citizens, while the rest were victims of Nazi persecution from Romania, Holland, and Hungary.

The Armia Ludowa are communist partisan forces formed by the Polish Workers Party. Their objectives are to support the Soviet military against German forces as well as create a pro-Soviet communist government in Poland. As such they have refused to join the Polish Underground State however many AL soldiers joined the ranks of the 1st Polish Army that was recently formed in the Soviet Union rather than the Red Army.

Most of the members of the 1st Polish Army are Poles and secular Jews who had been deported to the Russian gulag after the Russians invaded Poland on September 17, 1939.  Over 40 per cent of the officers are of Soviet origin while the command staff and training officers constitute 70 to 85% of the forces. That the Soviets maintain tight command and control of the regiment clearly indicates continued distrust of the Poles.  The 1st Polish Army is organized in much the same way as its Soviet counterpart but with substantially weaker armament.


From positions inside the ruins of Warsaw City Hall Polish insurgents managed to shoot down a Ju 87 Stuka Bomber. It is the only bomber that the insurgents have been able to shoot down since the Uprising started.  The reason is that the AK placed a ban on targeting aircraft due to lack of sufficient ammunition. Later in the afternoon Germans launched an offensive in all sectors, attacking the Jan Bozy Hospital on Bonifraterska Street, the Fiat Factory on Sapiezynska Street and buildings of the State Securities Plant on Sanguszki Street. The Simona passage on Dluga Street burst into flames under heavy enemy fire.

Lt. John Ward, a British soldier, and member of the AK has dispatched ever more urgent messages to London reporting that fighting has escalated in intensity.  A special dispatch was also wired to The Times providing details of the battle for Warsaw. This is what he wrote:

The battle for Warsaw is increasing in intensity. Today in Pius Street the Telephone Exchange was taken by storm. The action lasted 26 hours. The day before the Central Telephone Building in Sienna Street was taken. In all, some 200 prisoners have been taken in these two operations. Polish losses were not high. Yesterday the Germans opened fire with a mine-thrower in the area south of Jeroboams Avenue. In two hours they destroyed 22 houses, each house of which contained from 20-60 flats. More information to follow tomorrow.


Article addressed to The Times;

Today in Warsaw a battle is going on that I think is very difficult for the British nation to understand. It is a battle that is being carried on as much by the civil population a; by A. K., the troops of the Polish Home Army. It is total warfare. Every street in the city has been a field of battle for the past 24 days. The enemy mine-throwers, artillery and aircraft are taking a heavy toll of human life. The damage to property is incalculable. Normal life in the city is, of course, at a complete standstill. Practically the whole population is engaged in some sort of public duty. Thousands of people have been mobilized to stand by to put out the fires that are raging throughout the city day and night. Thousands more are engaged in keeping the streets that are in the hands of A. K. free from debris. There are, of course, many other duties such as couriers, field telephone workers, and of course Red Cross, which is working excellently under the most difficult conditions.

The actual army, that is to say A. K., is a queer mixture. Fighting in it are young boys of 16 years and old men of 70 years. There are weapons for about one man in a hundred. Weapons are varied; they range from the small automatic pistols 65 caliber to rifles. There are also some few heavy machine guns, but these are only used in emergency, as they use too much ammunition. Very few military formalities are observed. In fact, it is impossible to enforce any large amount of discipline in an army that is two-thirds untrained and has no uniform. There are colonels fighting as simple soldiers under the command of young lieutenants.

Weapons are being constructed. Hand grenades have been made from old gas pipes filled with some explosive mixture. These grenades have to be lit with a simple match before being thrown. Flame throwers that have been hurriedly constructed in small workshops are in use. Perhaps the most ingenious weapon of all was used two days ago. I personally saw ten of them explode. In an old German store 120 80-pound artillery shells were found; at first it seemed they were useless, until a sapper, since killed, put inside two detonators, to each of which was attached a 25 second fuse. When the order for action was given these shells were thrown from a second floor window as near to the German position as possible, and then the company of A. K. fled to such cover as was obtainable, the effect of this ingenious maneuver being considerable. The weapons that have been dropped by the GRAF have been of great value but are in quantity inadequate.


Another problem that is facing the population today is the shortage of food. Warsaw is a city that has been starved by the Germans for nearly five years. The quantity of food in the city at the outbreak of hostilities was small. It is already 24 days since hostilities began and at the moment in Warsaw we see no hope of a speedy end to the present state of affairs.


The population have a second great worry. What form will the Russian occupation take? News comes daily of further leading members of the community being arrested in territories occupied by Soviet troops. Also a large number of officers from A. K. have been put into Soviet concentration camps. It was understood by the Polish people when the uprising started that it was only a question of a few days before the Soviet troops entered the city. The fight against the common enemy that has been waged in Poland during the past five years has been hard and bitter. The population of the Capital was called upon to make one final effort. The call was answered gallantly. Hardships are many, losses very high, but despite all this the determination of the people is firm to hold out and rid their city and country of the enemy.

Just one month ago today, the Lwow Uprising was launched by the Armia Krajowa in what was planned to become a nation-wide Uprising code-named Operation Tempest. The battle for Lwow lasted a mere five days and ended with a Polish victory of sorts. No sooner had the AK liberated Lwow that the Red Army arrested the Polish soldiers and forced them to join the Red Army or be deported to the gulag. Lwow is now under Soviet control. After a fierce battle Polish units were able to take back the Holy Cross Church as well as the adjacent building of the former Police Headquarters at No. 1 Krakowskie Przedmiescie Street. This has given Polish units a much needed advantage, from which to attack German positions towards the Old Town.

On the opposite side of Krakowskie Przedmiescie troops under the command of Captail Cyprian Odorkiewicz "Krybar" has charged the University. Also taking part in the attack were insurgent armored cars "Kubus" and "Jas". However the Germans succeeded in repelling the attack. Kubus, means little Jacob in Polish, but also "Winne the Pooh". Construction of the first Kubus began on August 8, 1944 in a car repair shop belonging to Stanislaw Kwiatkowski.in the borough of Powisle at the corner of Tampka and Topiel Streets. The designer and engineer is Walerian Bieliecki. In fact there was no blueprint prepared. The construction was improvised and took thirteen days to complete. The Kubus is based on the chassis of a Chevrolet 157 truck, licence-built in pre-war Poland by Lilpop. Rau I. Lowenstein Company. The chassis is fitted with steel plates for protection of the crew. The plates have been bolted to a steel frame and then welded together. The Kubus could carry between 8 and 12 soldiers and is armed with a Soviet-built DP machine gun, underground-built K pattern flamethrower and hand grenades, in addition to personal armament of the soldiers.  It entered service yesterday as soon as it was completed and was attached to the "Wydra" motorised unit.  Today the Poles mounted a concentrated attack against German positions at the main campus of the Warsaw University. Poles charged the campus driving the Kubus, together with a captured Sd.Kfz.251/3 Ausf.D APC  but the attempt failed under heavy German fire.


During the Nazi occupation of Poland there has been a circulation of about 137 underground newspapers. There is an extensive array of journals printed by the Polish Underground, including a few written in the German language for propaganda purposes. The Polish Underground press has had remarkable longevity and success in distributing these newspapers -  right under the German noses. The vigor of the Polish Underground has not subsided. Since the Uprising began almost three weeks ago, young Poles have been risking their lives to deliver messages between insurgent units throughout Warsaw. Their sacrifices and those of child soldiers merits them the same respect as that conferred to any Polish soldier. 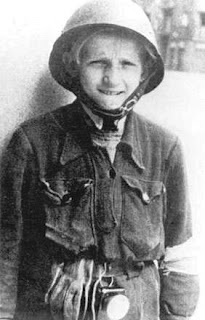