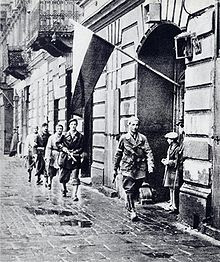 At 1:50pm today in Warsaw, Polish insurgents launched an Uprising in Zoliborz in a desperate attempt to liberate the capital city from German hands. Skirmishes broke out simultaneously in various boroughs including City Centre Sector and Wola. Within moments after the first shots were fired, the Poles had broadcast their first radio telegraph message to London stating emphatically “We Are Fighting!”

Plans for the Uprising had been in the works since German and Soviet troops had invaded and partitioned Poland in September 1939. These heroic Polish soldiers have come from every level of society, representing all political ideologies. They are men, women, and even children as young as 8 years old. They share one common goal: to oust the hated Nazi Germans out of Poland. In addition to the Armia Krajowa (the Polish Home Army) there is massive civilian mobilization among Polish engineers, draughtsmen, technicians, scientists, university professors, students, former government officials, artists, priests, manual labourers, and even known criminals. The youngest and the oldest are actively serving as well, albeit doing voluntary guard duty. There are reports of 16 year old insurgents doing guard duty in front buildings. One was bearing only a scythe for a weapon while another young guard was carrying a blunderbuss.


Polish insurgents have been able to destroy one building that was being held by the Germans.  Working in cooperation with the fire-brigade, the insurgents used the motor pumps of the fire-engine to spray flammable liquids on the building, quickly envelopping it in flames. There are no reports on the number of German casualties. Morale among the civilian population and the soldiers of the Armia Krajowa (AK) is at an all-time high. The Polish people of Warsaw have rallied together to assist the AK in building barricades, and anticipate Soviet intervention in a very few short days from now.

There is every reason to believe that with Soviet assistance, Warsaw will be liberated from the Nazi scourge. Polish fighters launch aggressive attacks against the Germans. Of the major objectives, the insurgents manage to capture the food and uniforms warehouse on Stawki Street, the barracks located in the building of St. Kinga School on Okopowa treet, the Military Geographic Institute on Aleje Jerozolimskie Street, the building of the Municipal Transport Company on the corner of Swietokrzyska and Marszalkowska Streets, the city's highest building, the Prudential, in Napoleon Square, and the Railway Head Office building at Targowa and Wilenska Streets in Praga.  The largest area cleared of enemy forces is the Old Town.
Just days earlier, Radio Moscow had broadcast to Warsaw, calling for a general Uprising. The following is a translation:


Appeal to Warsaw: Fight The Germans!

No doubt Warsaw already hears the guns of the battle which is soon to bring her liberation. Those who have never bowed their heads to the Hitlerite power will again, as in 1939, join battle with the Germans, this time for decisive action. The Polish Army now entering Polish territory, trained in the Soviet Union, is now joined to the People's Army to form the Corps of the Polish Armed Forces, the armed arm of our nation in its struggle for independence. Its ranks will be joined tomorrow by the sons of Warsaw. They will all together, with the Allied Army pursue the enemy westwards, wipe out the Hitlerite vermin from Polish land and strike a mortal blow at the beast of Prussian Imperialism. For Warsaw, which did not yield but fought on, the hour of action has already arrived. The Germans will no doubt try to defend themselves in Warsaw and add new destruction and thousands of victims. Our houses and our parks, our bridges and our railway stations, our factories and public buildings will be turned into defence positions. They will expose the city to ruin and its inhabitants to death. They will try to take away all the most precious possessions and turn into dust all that they have to leave behind. It is, therefore, a hundred times more necessary than ever to remember that in the flood of Hitlerite destruction all is lost that is not saved by active effort; that by direct, active struggle in the streets of Warsaw, in its houses, factories and stores, we not only hasten the moment of final liberation, but also save a Nation's property and the lives of our brothers.


And at precisely 4:10 this morning the Soviet commander of the Second Armoured Army ordered that by noon today, troops were to take defensive positions outside Praga (a suburb of Warsaw. This occurred an hour before the Poles even fired the first shots.
Soviet plans began as early as July 7, 1944, when the Supreme Headquarters of the Soviet Army had issued an order to Marshal Konstantin Rokossovsky, commander of the First Byelorussian Front. to begin the advance towards Poland from the north and south and to then surround German forces at Brzesc. From there, they were to continue toward Warsaw. However, a new order was issued by the Soviet Supreme HQ on July 28 calling for an attack in the "general direction" of Warsaw, to be followed by occupation of Praga on August 8 at the very latest. Other orders have been dispatched to the other fronts stationed around Polish territories. Nine Soviet armies including the Soviet-backed 1st Polish army are ready to cooperate in the liberation of Poland. The 1st Polish Army, under the command of Major-General Zygmunt Berling, is now just 11 miles south-east of Warsaw in the area between Deblin and Palawy, and has already established two bridgeheads on the western shore of the Vistula, near Magnuszew. The Soviet forces possess 3 times more soldiers and 5 times more artillery and tanks than the Germans.

Sources indicate that the 6th Soviet Air Army has about 1,465 combat planes in its fleet. Moreover, just the left wing of the Byelorussian Front has 1,750 tanks as well as self-propelled artillery, 7,600 artillery and mortars and 416,000 soldiers. The total strength of the First Byelorussian Front is estimated to be at 1.5 million soldiers. General Tadeusz Komorowski pseudonym “Bor”, Commander-in-Chief of the Armia Krajowa. has issued the order for the Uprising to begin at 5pm today however because of miscommunication among field units, the Uprising started too early. The Commander of the District of Warsaw, General Antoni Chrusciel, pseudonym Monter, while subordinate to General Bor, has complete command over the activities of the AK, including its logistics and intelligence. The Polish forces are confident that with Allied help, victory is within reach.


The Germans anticipated just such an Uprising, and made plans to link the 9th and 2nd armies in an effort to quash the Polish resistance. The Armia Krajowa is estimated to have between 36,000 to 40,000 soldiers, however only 2,500 of them are properly armed. By contrast, German troops are under-manned but heavily armed: regular German troops number just 5,000, with an additional 2,000 from the Sentry Regiment Warsaw, and 350 men of the SS reconnaissance regiment. There is an additional 4,000 of Luftwaffe personnel, consisting of 1,000 at Okecie airport, 700 at Bielany, 1,000 in Boemerowo, 300 at Sluzewiec, and 1,000 in anti-air artillery stationed throughout Warsaw.

The Polish Underground has been stockpiling massive quantities of weapons and ammunition long before the Uprising began, and rely on 4 main storage areas. Two in Warsaw and 2 in Praga. But just a couple of weeks ago German soldiers came across two enormous secret caches of weapons hidden in basements, one stockpile containing over 70,000 hand-grenades, and the other had 450 flame-throwers. According to AK Command, this was only a small portion of their supplies, there being an additional 320,000 grenades hidden in numerous other locations throughout Warsaw. German soldiers immediately flooded the basements destroying all weapons and drowning any Polish insurgents that may have been hiding there at the time.

Five months ago, during a secret meeting of the Polish Council of National Unity, General Bor, when asked about the military preparedness of the Armia Krajowa, replied tentatively, “Ten percent of the membership.” The AK Commanders are faced not only with lack of sufficient number of soldiers, but a severe shortage of weapons and ammunition. Despite these enormous setbacks, the Poles still hope to defeat the Germans in a few days – a week at the most. At the root of this optimism is the knowledge that the allies will be intervening with military support and armaments. Until then, the AK is confident that it can hold out. An estimation of current reserves reveals that there may be only enough to last for two or three days of fighting. While the Polish insurgents are waiting for military assistance from Great Britain and the Soviet Union, they are making due with the following supplies:: 1,000 guns, 1,750 pistols, 300 submachine guns, 60 assault rifles, 7 heavy machine guns, 20 anti-tank guns, 25,000 hand grenades, 35 bullets per pistol, 300 bullets per machine pistol, 190 pieces of ammunition per carbine, 500 rounds of ammunition for light machine gun, 2,300 rounds of ammunition for heavy machine guns and 50 shells for anti-armour cannon - but there is no cannon.

Despite the overwhelming support by Poles of the Uprising, there is discontent among insurgents about the shortage of ammunition and weapons. In response General Monter has threatened court-martial to any soldier who merely expresses dissatisfaction. Monter has made every effort to encourage insurgents that weapons can be captured in battles won against the enemy, and to resort to any means necessary, sticks and bricks if need be. In order to compensate for the drastic shortfall, the Polish Underground has been producing makeshift weapons: petrol-filled bottles, for launching at German tanks; improvised flame-throwers, and the most common weapon – home made grenades that are being produced by the thousands in secret workshops. The Poles salvaged unexploded German artillery shells and bombs to produce their hand grenades. In one shop alone, the Polish underground manufactured over 20,000 hand grenades.