Just before dawn today, a German unit numbering 1,600 soldiers launched a final offensive on the insurgents holed up in PWPW, the Polish Factory of Securities. It is a veritable fortress that has withstood powerful attacks by the Nazis, as well as their fascist allies of RONA. Wounded insurgents have been sheltered in the basement, attended by field hospital staff, who are providing sanctuary for countless numbers of civilians.


Fighting was fierce between Polish and German forces thoughout the night and by 8:30 a.m. the German forces succeeded in storming the building. The Polish insurgents did not have a chance to escape. Within moments the Germans had massacred everyone in sight. 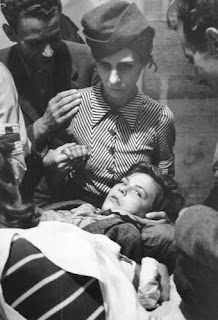 
In the Old Town, after a fierce struggle the Germans finally succeeded in taking over the State Securities Plant building on Sanguszki Street.  Amid the disastrous outcome, Col. Karol Ziemski  'Wachnowski" decided to break through to Srodmiescie. Strong enemy fire continues in the area especially on Napoleon Square along the northern stretch of Marszalkowska Street as well as on Swietokrzyska, Jasna and Sienkiewicza Streets. 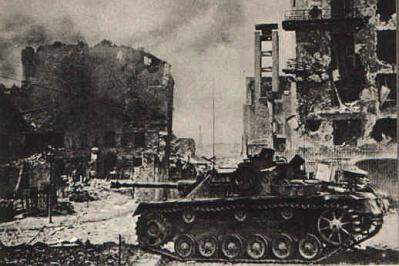 Since last night Polish units under the command of Lt. Col Boleslaw Gancarz "Gryf" have been launching continuous attacks on the German barracks between Szwolezerow, 29 Listopada and Podchorazych Streets.  German artillery fire has escalated in intensity and the entire Gorny Mokotow area is being hit very hard.  Meanwhile German forces launched a ferocious atack on Sadyba.


Lt. John Ward, a British soldier, and member of the AK has dispatched an urgent message today to the British Minister for Air. Here is what he wrote:

Most urgent. Addressed to Sir Archibald Sinclair, Minister for Air:

Sir, in view of your kind message of the 20.8. and the extraordinary conditions, I take the liberty of addressing this radiogram direct to you.

Sir, the situation here in Warsaw is critical. We have not sufficient weapons and ammunition to carry out any offensive operations, and hardly enough for de fence. In a few days' time we shall not even have enough for de fence. Losses are colossal. There is hardly a house that has not been hit by artillery, mine-throwers or air bombs. The people of the city are beginning to despair. They see no help. The moral effect alone of a few R.A.F.: machines would be terrific. Supplies dropped on the outskirts of the city do not help us. We have no communication lines to the suburbs.

It is the centre of the city that mainly needs help.

Sir, the main things needed are: anti-tank weapons, hand machine-guns, grenades, and ammunition of all kinds in large quantities.

Sir, the anti-tank weapons of the type dropped by the GRAF proved most effective. Now we have not one projectile left. In the city there is no organized enemy air de fence. Suggest that each day is suitable but watch for the weather report.

Sir, it would be of great help if the Okecie aerodrome on the outskirts of the city could be bombed.

Sir, I am your obedient servant.